Well another first for me.

In the process of building the first bridge, I wanted to have some nice looking guard rails but was unsure the best way to install them.  I've read where some guys have glued them with CA, others have used an epoxy while others have used Plio-Bond.

Somewhere along the line the idea of using PCB ties to attach them entered my mind.  After a bit of research and asking questions, I decided to give it a try.  It seemed fairly simple and straightforward. I've done my share of soldering wires (but not track) over the years so I had a decent of idea of what to do.

After getting things ready I cut and filed the groove in the first tie and attempted to solder it to the rail.
First problem; The PCB ties were a tad bit thinner than the ME bridge ties, so I just made a thin spacer and laid the PCB ties on that so they sat tight to the bottom of the rails.

Second problem: The solder didn't flow like I thought it should, then the light went on!  Tin the ties first dumba$$! D'oh!  That worked like a champ. At first I added just enough to cover the surface, a few ties later I decided to add a decent pillow to each end of the ties, then the rails sat right down into the solder pillows when they melted.

Once I got past these two problems, things went pretty good after that.  Then came placing the guard rails, the ME ties have little spike heads sticking up that helped position the C55 rail.  I laid the first end in place and touched the iron and bam!  It was stuck.  Then I just worked my way down the track and in a few minutes I had both guard rails soldered in place. 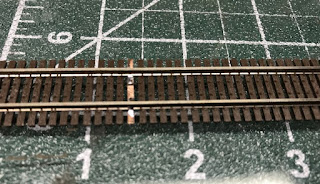 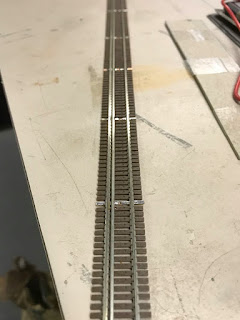 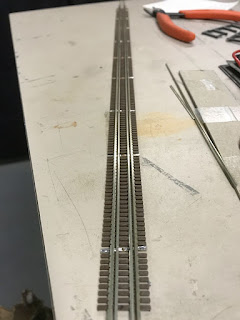 Looks like I need to go back and adjust that first tie?

I want to thank "pbender" from NSN for his insight on the PCB ties and Doug Midkiff for donating a couple of the Clover House PCB strips so I could give this a try.

BTW, seeing today is December 7th, let us not forget the tragedy at Pearl Harbor 75 years ago today by clicking on the flag.


"Honoring the Past, Inspiring the Future"