I can't see the damn tabs!

One issue I had with the tabs right after I first switched over to them was with empty open hoppers and empty woodchip hoppers.  I had to sit the tabs in the cars and this meant on the bottom of the cars.

May not seem like too big of a deal, but when the layout is set at 52", some of the crews couldn't seen into the cars, some had to stand on their tippy toes.

From my normal eye view 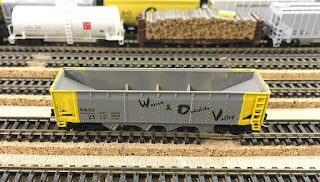 Standing on my toes. 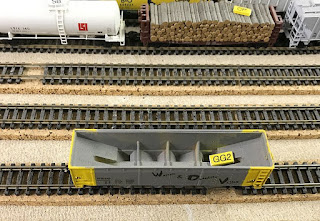 This issue would pop up while staging and then during a session but was forgotten about soon after the session.

Well with the next session just around the corner, I decided to try and find a solution to this issue.  I thought about making some sort of a bridge from plastic or wood that could sit across the top of the hoppers. I also thought about using some of poster putty to hold the tabs in place?  All seemed to be more work than I wanted.

Last night I came up with a little something that might work?
I spied one of the clear plastic covers that come in the MTL jewel cases.  The nice thing about this was it was clear and wouldn't stand out more than the tabs do.

So I cut a small section off and bent the ends down so they hung over the edges and placed the tab on top.  Not bad, but kind of bulky and the tab wanted to slide a bit. 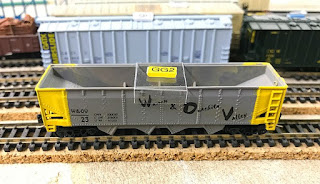 So I kept playing around with this.  Pretty soon it hit me, let's make it narrower so the tab straddles it like they do over a roofwalk? 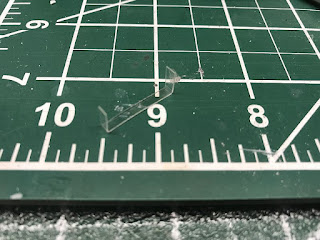 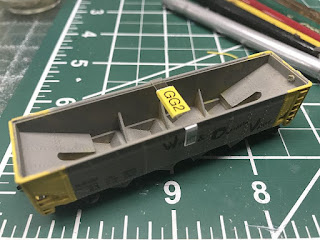 This seemed to work OK and it was much smaller, plus the tab couldn't slide around either. 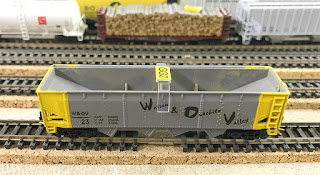 So for now I think I'll give this a whirl and see how they ride throughout the session?  And like Steven said, if anyone knocks them off due to some rough switching, I guess that crew earns a turn to wear the Asshat award. 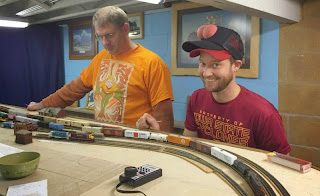 Tonight I finally got the pipe loads completed for Ozark Irrigation.
I still need to get some strapping installed on the pipe, but at least I'll have some loads for the session instead of using our imagination. 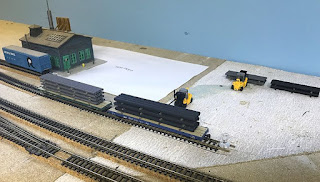 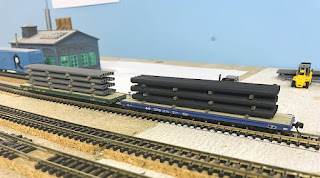 Made some good progress today.  Labored on Labor Day.

I finished getting the cars staged and tabbed.
I got all the extra cars moved off the layout.
I re-typed some of the Train Instruction sheets and added the new industries.
Removed some of the passenger cars from the two Mail trains and added a few extra TOFC's.

Then I started making a few pipe loads for the flat cars that will serve Ozark Irrigation. 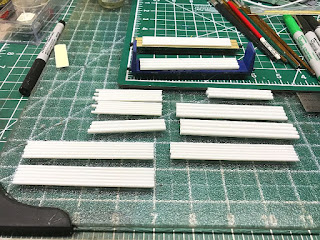 A few years ago I picked up a slug styrene round and square tubing from a seller on eBay called kdarr70.  He sells a lot of different types of styrene in bulk a lot cheaper than you can buy it from Evergreen or Plastruct.

Closing in on Op session 14

Last night I got off to a rough start staging the layout.  I generated a new Wheel Report and after getting the biggest share of the cars staged and tabbed, I noticed that something wrong.  On one sheet was calling for 14 cars, but on another version of that sheet, it was showing 13 cars?

So I opened the spreadsheet and starting digging through it.  Found it!  One of the sheets wasn't summing up all of the cells becuase I had added a couple of lines to one sheet and not to the other.  I can see now how important Copy & Paste is going to be with this.

Next I came across another issue, one sheet was incomplete.  I must have started working it over and never finished it or simply missed it. Grrr!  After about an hour or so I got things in order and went back down to finish staging the cars.  So we'll see how things work out in this session.

I still have a bunch of small time consuming things to do:


I'm sure there are a ton of things that I'm not thinking of?

There are two things that I want to add to the Ops, one is the new Seniority Status for assigning or choosing the jobs on the layout.   This will based on a "per session" basis rather than "accumulative" basis for now until we see how it works.

The other thing is I plan to split the El Dorado Yard Job into two shifts.  There are 8 jobs per one full session that the crew has to deal with.   This way the crew isn't tied to the yard job the entire session and it creates another job.

With me being off work for a month due to a minor leg injury, I'm hoping I will have more than enough time to get things done in a short order.  I'm itching to get the trains rolling and see how the new track arrangements and industries work out.