Tonight I got a chance to remove the large curved turnout and some of the track.  It looks like I may get somewhat lucky and not have that big of a job on my hands that I anticipated.

After pulling it up I laid it over by Riceland and if I can leave a bit of flex in front of the existing turnout that leads to Malvern, I maybe able to the tweak it to the right enough so that things will line up correctly.

This should give the mainline a larger radius without any turnouts between here and the yard and allow it to parallel the backdrop without an "S" curve.

The continuous run track will also have a bit larger radius, but I will have to do a little fiddling to get it to line up properly with the 90° diamond on the Winnfield side. 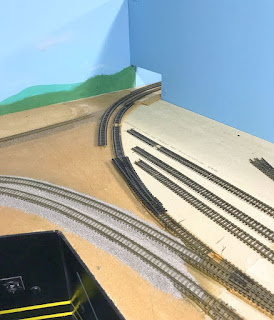 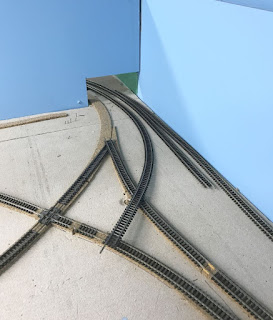 This next realignment is going to be a big one compared to the work I've done at Ruston, DuBach and Calion recently.  It's going to affect more than just one town or one small area.

This area of the layout was the first sections to be laid when I started laying track back in 2009.  Back then I was very anxious to get some trains rolling and wasn't paying much attention to what I was doing.  Which of course is now coming back to bite me in the ass!

The main issue I'm having here is with the two sections of 11" radius snap track. At the time they allowed the tracks to fit plan I had in my head.  But now after several years of Ops, those two sections, coupled with a turnout just past the backdrop in Winnfield has create enough of an "S" curve that I am now having issues when running longer cars like the new TOFC's and Auto Racks. Something I hadn't planned to run when I first started the layout.

This shot gives you an overview of the layout from "MQ" siding in foreground, through Fordyce to just past Riceland's elevator in Haskell in the background. 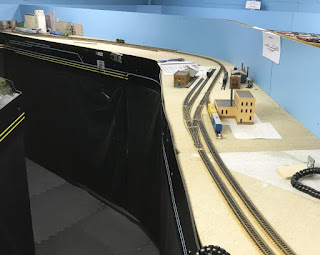 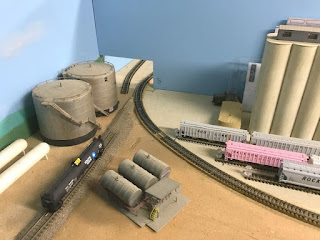 This shot is on the other side of the backdrop in Winnfield (current).  The loose flextrack against the right backdrop is where I plan to relocate the new yard lead for the rear yard.  The track that curves to the lower left after the turnout is used for continuous running by myself.  This section is actually the end of Rock Island's main at Winnfield during Ops sessions. 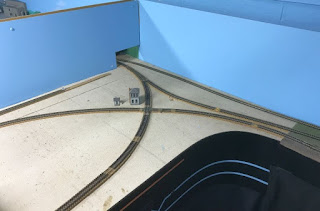 Originally there was only one track leading into the yard (just out of the picture on the right) which can seen in the second picture below. This was later split into the two tracks to eliminate the yard being a large reverse loop like it was designed for when it was our staging yard for our Bend Track modules.  Now the entire yard is nothing more than two run through open staging yards that are folded and became an extended section of the mainline. 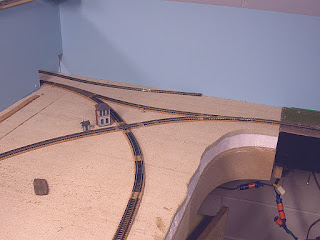 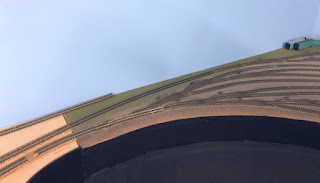 Heres another broad view of Winnfield and the yard leads. 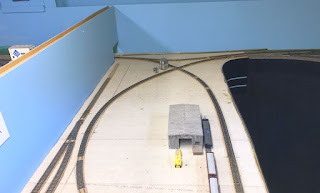 The track against the left backdrop is the ICG.  The next track to the right is the lead to the front yard which also connects to the track on the extreme right just out of sight to the bottom.

Here's the plan!
I hope to shift the rear yard lead closer to the backdrop as it exits the yard, thereby giving me a broader curve as it passes through the backdrop and enters Haskell. The turnout may actually have to be moved to the Haskell side.  If this move happens, it may result in being the first and only powered/remote turnout on the mainline.

This will probably mean that ALL the tracks in Haskell will need to be ripped up and relocated closer to the fascia.  The two tracks that are ballasted (leads into Malvern) will more than likely need to be moved as well.

I do not plan to revise the existing track plan, but rather just shift everything to the fascia.  I'm not sure though how this will affect the Riceland, Ind tracks or it's switching lead?  Hopefully they can stay untouched.  However, the entrance into the Riceland tracks have experienced some issues, so more than likely they too will be pulled up.

I may wind up just ripping everything out and starting over, it might just be easier. 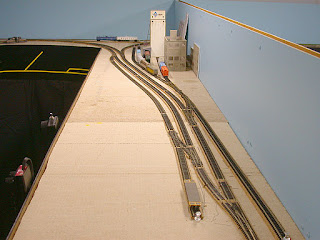 I'm not sure how far I will rip up the tracks on each side, but I can see the possibility of a little bit on the Winnfield side?  And as far back as Fordyce.  I say that as I have plans for Fordyce later, but if needed I will do this while the tracks are already ripped up.

I'm not sure when this undertaking will commence?  I have a few things that will need my attention first, such as the UR92 when the throttles show up.  But sooner than later.

I think this is where the saying
"A layout is never finished"  came from?

Well the time has come to upgrade my Simplex Digitrax Super Chief  Radio to the newer Duplex system.

While I don't NEED all the bells and whistles that comes with the Duplex upgrade, I have two DT400r's from the original starter sets that a buddy and I got and one of the DT's was showing issues when I plugged it in.  The screen would flash back and forth between the track power voltage and the series ID of your throttle along with a series of Hex numbers.

It would continue to repeat this and never settle down.  Now the second one is showing the same symptoms.  After a little digging on the net I found out it had something to do with some capacitors that would go bad over time in the original DT300's and 400's.

After conversing with my Guru, he advised me to get them sent in and have them fixed and while they were in for repairs to have them upgraded to the Duplex, as Digitrax sent out a notice that they were planning to retire the Simplex system shortly. Following his instructions, I shipped the first DT400r in for repairs and upgrade along with a UT4r to be upgraded.  Then I picked up a UR92 from him so that when the time came to send the rest of my throttles in for the upgrade I would still be able to operate the layout with these two throttles.

To help offset the cost of this upgrade, I've been turning to eBay and started thinning the herd to scrape up a little extra to help pay for this, but it's still gonna hurt.

Before shipping them in I want to get the UR92 installed and test the two throttles to make sure the system works. Then in the meantime while the throttles are in for the repairs and upgrades I plan to start ripping up the mainline between Haskell and Winnfield to realign the main with a larger radius and a new alignment into the yard.  Right now it's a bit tighter than I'd like and I've had issues with longer cars derailing as they enter yard from Haskell.

Due to lack of experience (or over excitement) when I first started laying the track, I grabbed two sections of Atlas 11" radius curved track.  While this isn't the main problem, I also have a PECO large radius curved turnout following them and this has created a dreaded "S" curve.  60' and shorter cars normally do not have issues, but not so the case when I run auto racks and TOFC's. So this needs to be rectified and I figured it would be a good time to do this while the throttles are in for upgrades and repairs.

At the present I have no plans for anymore Ops sessions until these two projects are complete.  Hopefully they will be done by this fall. 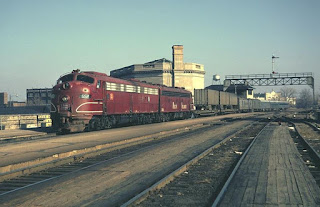 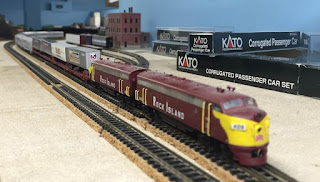 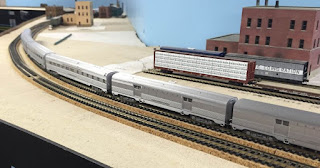 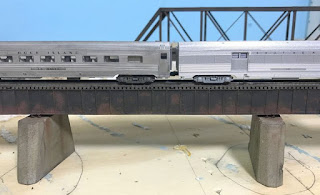