Phil asked about the size of the layout and El Dorado and the length of trains that I run.

Work trains:
LRMP's and the MPLR's have a max of 18 cars, three locos max and caboose.
The work trains may have more than 18 cars once they leave El Dorado depending on how many cars they've picked up.

The Locals:
The Winnfield & Haskell turns and the W&OV's Razorback have a max of 15 cars, two locos max and a caboose.
The Locals will fit in all the sidings throughout the layout and are required to take the hole if a superior train approaches.

A caboose is required for any train movements on the line with the exception of movements within the yard limits at El Dorado.

These are the base rules so far, and may change if conditions and operations change.

Action in the new yard.

Finely, a few action shots!
These were taken on the first day of operations in the new yard. 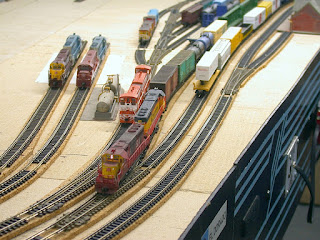 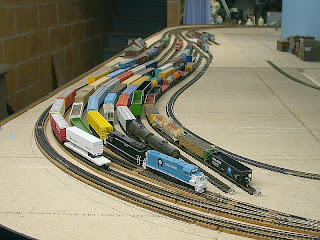 These goats are pulling a cut of cars from yard track #1 and will spot them on the A/D tracks for pickup by the NB MPLR-H which should be arriving shortly.
These SLSF MP15DC's are on loan from the BN for evaluation with the option to buy. 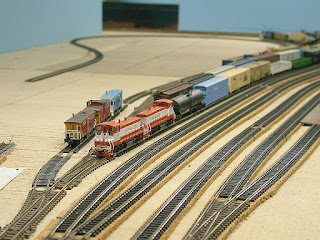 As they are seen shoving the cut back onto the A/D tracks, Amtrak's NB "Cajun" eases to a stop on the passing siding for a quick 15 min layover. 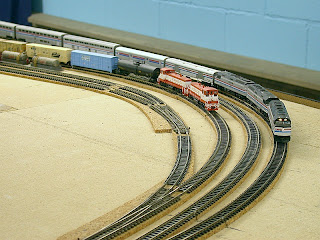 This new yard is probably some of the best looking rails that the Rock Island crews have seen in years!

The re-construction of El Dorado yard.

The last big hurdle has been crossed!

Not knowing exactly how the yard would work or the how it would interact with train schedules, I laid out the yard to how I though it should work.

After the first few ops sessions it was apparent that some changes would be needed.  The first of the changes was to the actual trains themselves.  The LRMP and MPLR was broken down into four trains:
LRMP-W & MPLR-W
LRMP-H & MPLR-H

At first the LRMP and the MPLR carried all the cars that were needed for the two locals and the W&OV interchange. Since they needed to run first so that the locals could be built, they left the El Dorado yard jam packed and the yard crew sweating bullets!  They had to get the inbound cars off the LRMP and into the yard,  get the outbound cars out of the yard and back on the LRMP before the MPLR arrived and then had to repeat the process and very little yard space to work with.  After both trains had left town, the yard was so jammed up with cars there was no place to shuffle anything while they trying to build the first local.  Once the locals were made, the yard crew basically had nothing to do till the locals all returned.

The decision was made to break them into the four trains that carried half the amount of cars.  Now the first two trains that ran were the LRMP-W and the MPLR-W.  They delivered the cars that were needed for the Winnfield local and the cars bound for Malvern via the W&OV train, hence the "W" designation.  The "H" designation on the LRMP-H and the MPLR-H would then bring the cars to town for the Haskell local about half the way through the session.

This gave the El Dorado crew more time and space to get things tucked away before the next batch of cars arrived.  It still kept the yard crew busy as they were also in charge of cutting off the inbound cars and tying the outbound cars back onto the trains while they sat in the single A/D track.   While this work was going on the crews of the manifests had nothing to do so they would help the yard crew out to keep things moving. 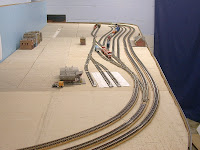 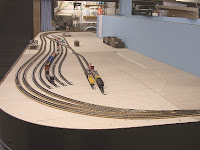 This was a vast improvement, but more changes were still needed.  After many hours of discussion the decision was made to rip out the yard and add the second A/D track, something that should have been installed during the original phase of construction but I was worried about space.

So after I got the basement floor and the walls finished, the re-construction began.  One thing I wanted to do was to move the engine house tracks so the local power would not have to make several reverse moves through the yard to get to the house tracks.  I wanted them to come off the yard lead so they could back right onto or off of the A/D tracks but there wasn't enough room due the curvature on the north end of the yard.

One night while standing there trying to envision how to lay things out and where to begin, the light bulb went off and I seen how the local power could leave the A/D tracks and pull down the yard lead and then back into the house tracks.  This also allowed the engine house to be placed closer to the yard throat and still leave me enough room for scenery on the north end of El Dorado.

The next night I ripped out all of the tracks except the mainline and passing siding.  I then started laying things out and got the A/D tracks installed.  The second night the yard ladder and caboose track was laid in place along with a few of the yard tracks.  By the third night, all the tracks were back in place with the exception of the house tracks, but by then I was able to see how I could fit them in.  I was going to use a #6 curved left hand Shinohara turnout that I had bought years ago, but the left hand turnout was actually a right hand, gggrrrrrr!  For the next couple of nights I tried to decide what combination of turnouts I should use for the house tracks.

Remembering that there was a seller on eBay who custom builds turnouts, and while looking for this seller, I actually found a curved left hand Shinohara for sale!  But the price was about the same cost as to have one built.
More pondering.....

The next night I found myself fiddling with some leftover, left hand curved PECO turnouts.  I could use one to come off the yard lead and with the help of some temporary sectional track I managed to get the house tracks where I needed them without looking like I crammed them into place.  It wasn't the best solution but it seemed to work, at least for now.

With this arrangement, I was able to go from three short house tracks in the old yard to two longer tracks that would hold up to eight locos if needed. This location also allowed me to park the yard goats on the yard ladder next to the engine house where they could be fueled without the need to run to the house.

The way the yard is laid out now, the yard crew can work the yard and the A/D tracks without ever having to run out onto the mainline.  The only drawback, I think, is although now that I have two A/D tracks, they may be too short to hold the entire manifest consist.  So now the yard crew will set the outbound cars on one of the A/D tracks and the manifests can leave their cars on the other A/D track.

The current plan now is to have the LRMP's and MPLR's make their cuts, slip their cars onto and off of the A/D tracks while they leave the rest of the their train setting on the mainline.  Since they will not have to wait for the yard crew to do the work for them, they can easily swap the cars out themselves, tie back onto their train and leave town in half the time as they did before.  If, while they have the mainline tied up, any through train that rolls through town can use the passing siding to sneak around them as long as Amtrak is not in town.

Other changes that were made was the removal of the two short POOL tracks that was in the rear of the old yard and a larger caboose track was installed that also doubles as a run around track.  The POOL tracks hold the captive service cars becuase they never go back to the main yard.  Most of these run between the ICG interchange at Ruston and Malvern via the W&OV.  These are now stored on the rear track or yard track 4.

With this new scheduling and yard arrangement, it essentially gives the yard crew two more tracks to play with and greatly reduces the amount of stress and strain while shuffling the cars.

The Wrap Track [the loop of track seen in the south end of the El Dorado] will eventually run up to the elevated business district in El Dorado via a 3% to 4% grade.  It could also be used as a spare track to move cars onto if needed, of course the air brakes had better be set. 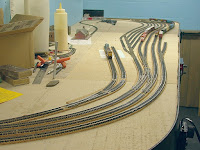 Here's a view of the north end of El Dorado yard looking south.  In the first picture the tracks from right to left:  Passenger siding, mainline and the yard lead with the lead for the house tracks. 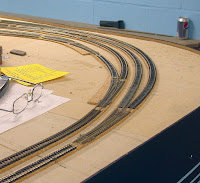 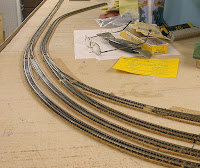 Had I been able to gaze into my crystal ball before the original construction began, this is most likely what I would have designed in the first place.  But, live and learn.


I recently received a box of goodies from the Postman!

I ordered four Digitrax UT4r simplex throttles for the two locals and the manifests trains.  So as to make better use of these throttles and my wireless system, I also ordered some re-chargeable batteries from an on-line company that carries the MaHa Imedion brand batteries.

I was told by a friend of mine [who I have relied heavily on for my Digitrax DCC products and info] that his club has started using the batteries and have been very happy with their performance.
They are 9.6v 230 Amp low discharge battery that are said to hold 85% of their charge for a year.  He has told me that there modular club has used them non stop for a two day and they have held a charge through the show.

I got the four UT4r's set up and running and let me tell you they are nice and easy to use.  So much so that I am thinking about ordering 1-3 more eventually.  Everything can be done with the hand that is holding them without the need to use your other hand to turn the throttle knob or push a button like I do on my DT400's.  This leaves the other hand completely free to work the couplers or turnouts!

Can't wait to put them into action with the next operation session!