After having some issues with the PSC circuit breakers a few months ago, I was finally able to get them tested, installed and working.

Out with the old, in with the new pt2

My DCC and Electronic Guru was in town this past week and we got together one day a took a long hard look at them.

Of course when you take your car to the mechanic, it never acts up!  Likewise with the circuit breakers they didn't act up at all now that he was looking at them.  The issue if you recall was after I installed the new Buzzers on the breakers so I could hear them, some of the buzzers were buzzing whether they were shorted or not?

I pulled them off the layout and tied them directly into the Command Station to see how they reacted. Well by doing this they would still buzz regardless of a short or not. So I left them out until Mike got back.

When I tested them for him again, non of them buzzed.....damnit!

So we hooked them back into the layout, these were for the Main Yard.  Upon a successful reconnection, we turned the track power on again and they showed no sign of buzzing!  But, we did hear buzzing coming from the 4 units for the main layout!  Closer inspection revealed two were buzzing and showing a short.

Long story short, they weren't lying!  When I installed the deck bridge I never installed any insulated joiners to separate the "El Dorado" and "North" districts as I wasn't done with the trackwork and bridge sections.  I also need to go back and drop new feeders.

Thinking that they were both protecting both districts, I removed the rail joiners on the right end of the deck bridge.  But that had no effect!  I scratched my head a bit more and then it hit me.  I still had some original feeders leading up to the deck bridge and to the right of those is where I removed the joiners, so the power was still getting to the track over the bridge and on to the "North" district.

But the real culprit wasn't the feeders, it the guardrails on the deck bridge!!!
on one end.  I had temporarily tacked the guardrails in place so trains could run and the trip pins on the couplers didn't snag the ends of the guardrails.  I knew not to connect them because they would short since I soldered them to the bridge track with PCB ties which connected them to the actual rails.

When I released the guardrails, the short went away!

After wasting all that time tracing that down, Mike and got to work programming the PSX units.
it wasn't the easiest of instructions to follow, but Mike got it and away we went.

Each PSX unit has it's own ID number that can be accessed via the DT402 using the "SWCH" button. This allows me to also program the "Variable Trip Voltage" and also to shut each unit off independently if needed.

Even though I still can't hear them as well as hoped for, I'm going to look into getting some LED's for both sets so that I can connect them for  a visual notice of a short. 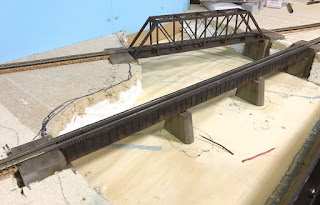 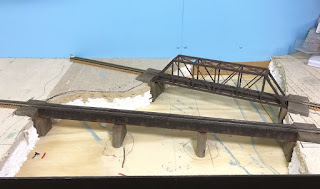 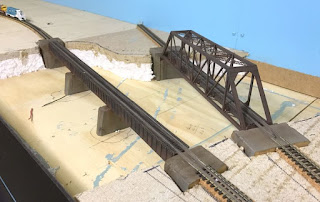 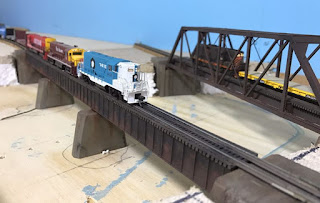 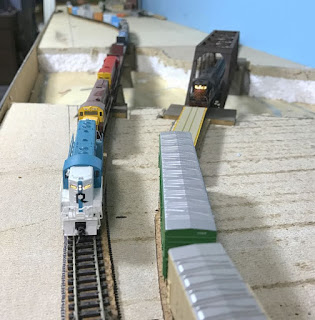 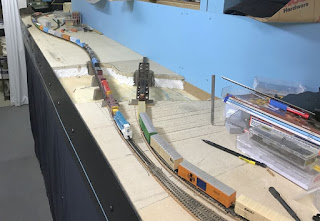 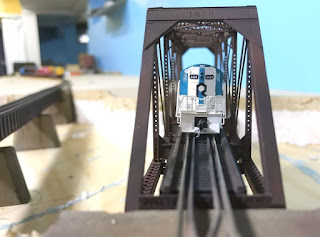 My B&B gang hustled to get the new Deck bridge pressed into service before the New Year.  I had to pay them double time, but they got it done.


The bridge, abutments and piers are just temporarily installed. I still have a lot of work to do it before I can stick a fork in it and call it done. I plan to leave things just as they are until I get the second bridge in place and leave them loose so I can remove them when I get started on the scenery. 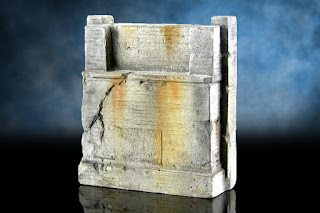 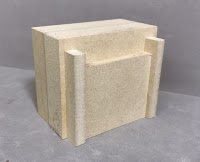 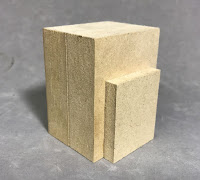 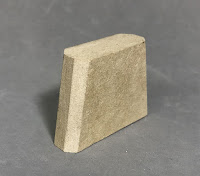 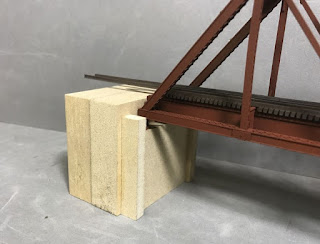 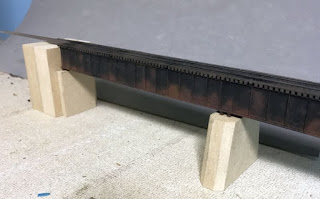 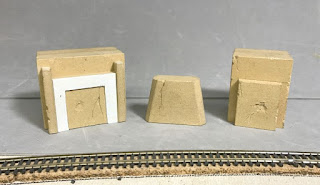 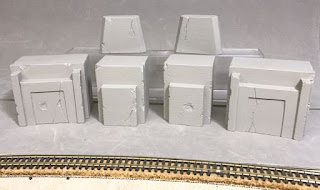 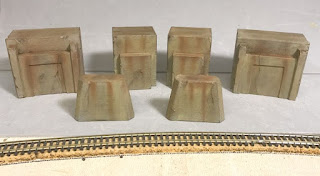 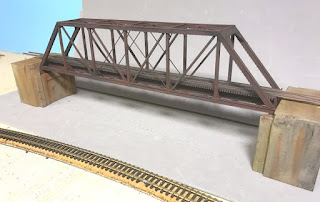 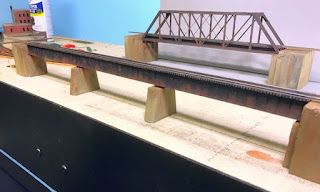 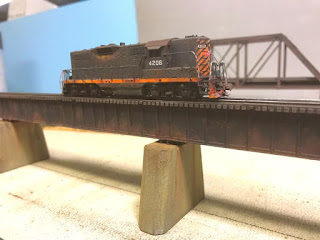