More ballast and some green at Gavilon

I just about have all the ballast down on the Gavilon tracks.
This was the last section to get glued tonight.  This is the turnout for the hopper unloading spur. 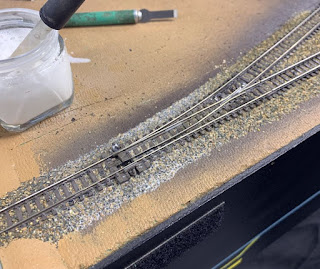 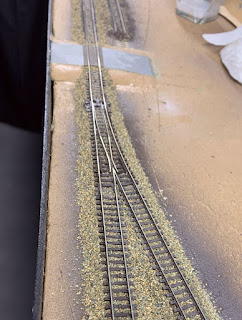 A little further up the line past the grade crossing is the tank car siding, I added a smidgen of Yard Mix ballast to give it a dirtier look. 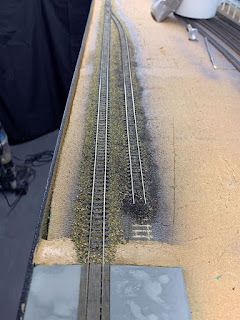 Further up the line still is where The Rock cut the abandoned line to add their connection. The grayish peppered ballast is the Kinzu colored ballast that I'll use on the rest of the mainline.  Hopefully when I get some grass down the colors will stand out better? 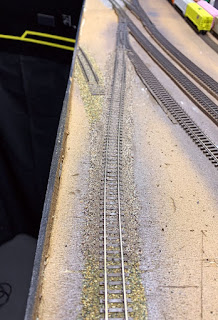 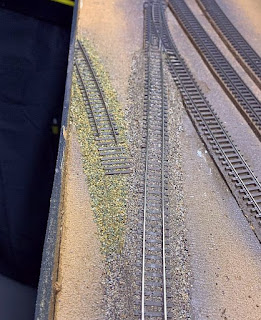 Finally I got some earth colored foam down on the grade crossing and then added some blended turf to see what a little color will look like. 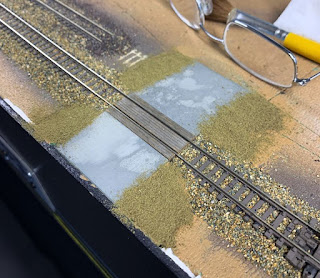 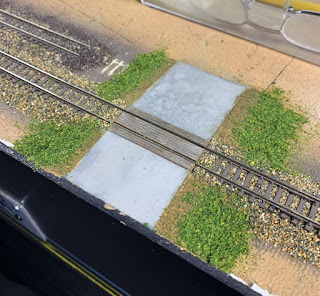 The splotches on the road is from the alcohol that I sprayed on the ballast before applying the glue mixture.  I still plan to add more grass and weeds to the grade crossing once I get to that stage, but for now I want to finish applying the ballast to all the tracks in Haskell.

It feels good to be working with some scenery for a change.  I forgot how much I enjoy ballasting.  It's a little tedious yes, but get some good tunes on and it seems to fly by.

The first bit of ballast at Gavilon

I finally got a chance to play around with some ballast at the Gavilon grade crossing.   This has only been tamped and not glued yet. 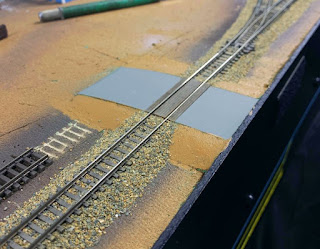 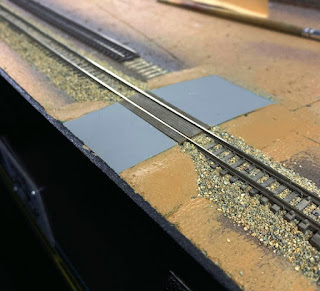 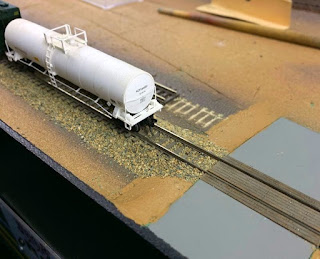 Well after a year of getting started on this scene, siiiiigh, I'm finally making some progress. 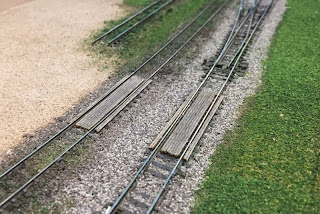 So this time I was going to install it first and ballast afterwards.  But the question was: Where did I want it?  Before I could place it I had to figure out where the buildings would go and how they would layout.  So I spent basically the last year getting the buildings built and laid out so I wouldn't have to relocate the crossing later.

Once the main structure for Gavilon was roughed together, I grabbed the crossing and started playing with the best location.  First I wanted to color it so I started with a wash of Alcohol and India Ink, that wasn't dark enough so I tried a brown oil wash, still wasn't dark enough.

So grabbed some Pan Pastels, a light brown and a light gray.  This worked.  Next I used some sheet styrene the same thickness as the spike heads so the center portion of the crossing would sit level and just below the rail heads.  For the outer crossing planks I snipped off the spike heads and then glued more sections of sheet styrene to the ties.

I wanted to water proof the grade crossing as much as possible so I sealed them with Dullcoat to protect them from the ballast glue and when dried I glued them into place.

Using more of the sheet styrene I made a couple of pieces that would be the asphalt road, painted them gray and glued down some thick styrene strips to support the road at the same level as the crossing planks.  When those were dried in place I glued down the styrene road.

Then I had to ponder how I was going to fill in around the road to make the shoulders.  I thought of using plaster, Ground Goop, rolled up tissue soaked in glue and a couple of other ideas.  A friend told me to use strip cork and build it up.  Then the light came on, I'd make the shoulders by using Floral Foam.  This is the soft green foam that they use to make flower arrangements.  Years ago I used some to make coal loads in some MDC Thrall hoppers, I cut it to a rough size and wedged them into the hoppers and because it's so soft I was able to shape it with my fingertips and paint it. 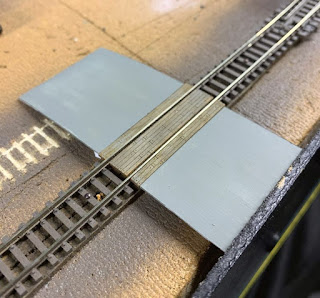 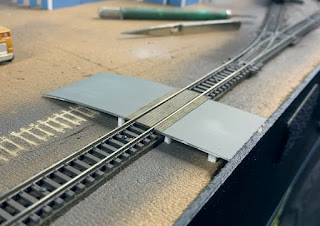 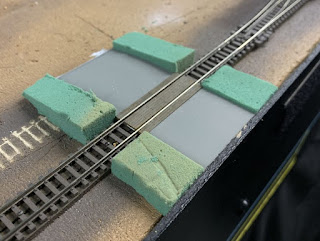 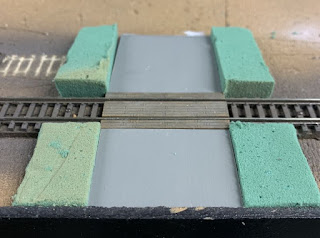 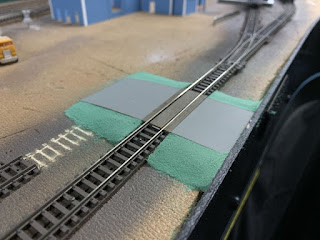 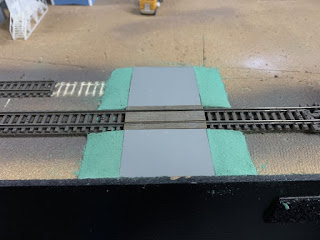 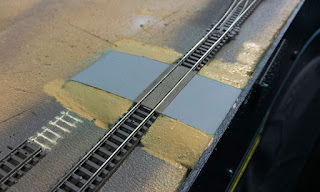 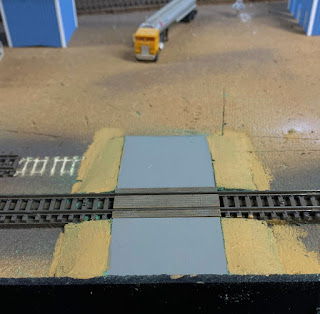 I couldn't find any left over so I made a quick trip to Wally World and picked up a pack and started in.  It's been awhile since I had bought any and didn't realize there were different types.  I picked up what they called Wet Foam which was meant for live flowers.  I should have gotten some Dry Foam for fake flowers, which I did grab some from Michael's the next day.  The Wet Foam worked but was a lot softer and I would suggest using the Dry Foam. 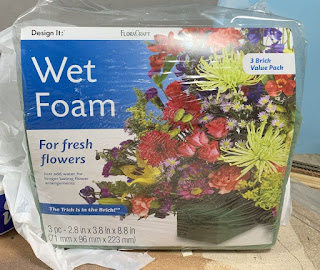 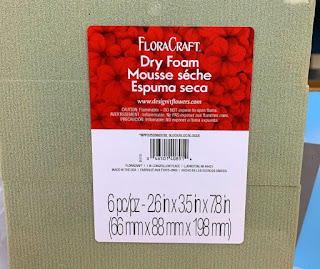 Once the paint dries, I should be able to commence with the ballasting.

I found a little bit of time this weekend to get the main structures assembled for Gavilon.

The actual M.A.C. kit called for 4 sections between the two end caps on the larger building, but I opted for only three which gave me a bit more space for the small elevator shed in front.  This will be used for bulk loading of fertilizer trailers or trucks.

For now I used some "I" beams to support the downspout..... they look a little big but I need to add some more details and adjust the length of the downspout. 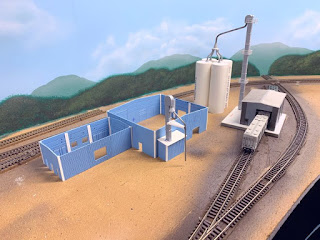 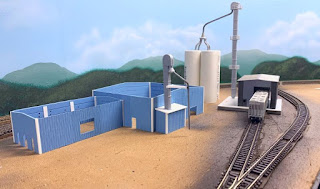 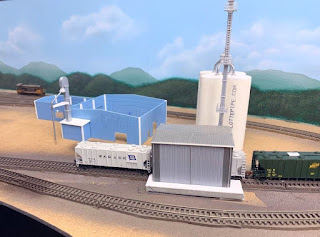 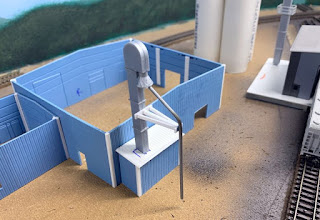 The next step is to paint the structure to match the unloading shed in the 2 tone gray scheme and add the roof, doors, windows and the other details.  Then I'm going to try and get some scenery down in this area, starting with the wood crossing planks into this facility so I can finally do some long awaited ballasting.  I've held off on ballasting as I wasn't sure exactly how the buildings were going to fit or where and I wanted to install the wood crossing first.

The Riceland elevator and mill buildings that I have here now are just stand-ins, once I get the new kits built and situated I can ballast pretty much all of the tracks in Haskell.