A lot of things outside has needed to be wrapped up as summer wound down and fall approached, so I've been taking a bit of a break from the layout and the Olin-Chlor construction project.  Also been trying to clear off the work bench again so I can settle down and get ready for some winter work on the layout.

Recently though, Steven Johnson [owner of the Rock Island: Ottawa Sands layout] became intrigued by the Tab-On-Car routing system and decided to take the plunge. He has worked at least one local layout that uses it and has watched a video by Mark Dance [owner of the Columbia and Western layout] where Mark does a nice job explaining his system.

So I followed along and talked to him about this system and his endeavor.  It's a system that I always thought would be a good way to easily and visually route cars but always thought that is would be visually distracting to the surrounding scenery [of which I have very little of at the moment].

I use the Wheel Report which bases car movement via car types unlike with numbers as the CC&WB method does. Although the Wheel Report is simple and basic, it gets the job done.  Not having to try and read the sometimes small N scale car numbers is a plus, but the biggest drawback that came along was that some of the crews who operate on my layout do not always know the difference between certain types of cars: Plug Door boxcars vs Insulated Boxcars, Grain Hoppers vs Plastic Hoppers, so it has caused a few misplaced cars on the wrong trains and wrong sidings, Oh well.  But for the most part it works well.

But with the Tab-On-Car system that guess work will be eliminated. It also has the plus that the crews do not need to carry a sheet of paper along when their on the road.  As long as they can match up the colors and codes for the industries. I plan to mark the industries on the fascia schematic so things should flow a bit smoother?

So after getting the info from Steven, I set about to gather up the supplies that and I needed and got after it.   Steven graciously offered to print the needed labels for my tabs. Thanks!   Once I got the "C" channels painted I was ready to apply the labels.

The first night of applying all of the White labels, I came up out of the basement with crossed eyes and cramped fingers! Sounds like a good thing to blame Steven for!  Man those label were small and trying to peel the backing off them turned out to be a chore. LOL.    After a second night I got the rest of them applied.

This is what I came up with; 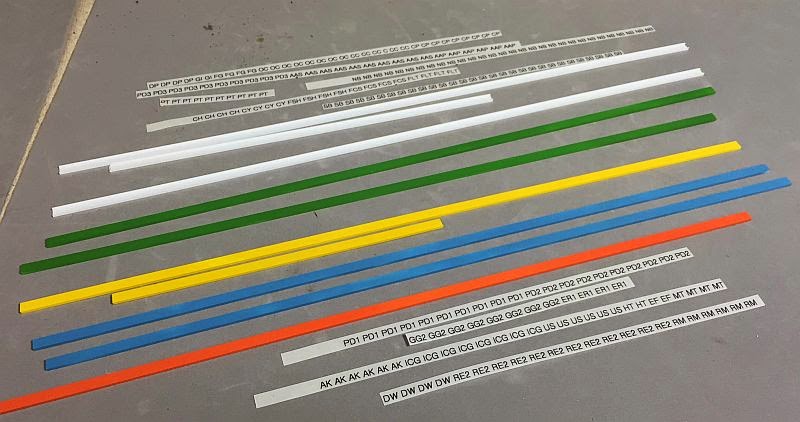 I also picked up a couple of small 15 compartment, 3.5" x 7" Plano tackle boxes meant for beads.  I glued the dividers in place and then glued them back to back for a handy storage box for the tabs and added a pair of tweezers with Steven's suggestion. 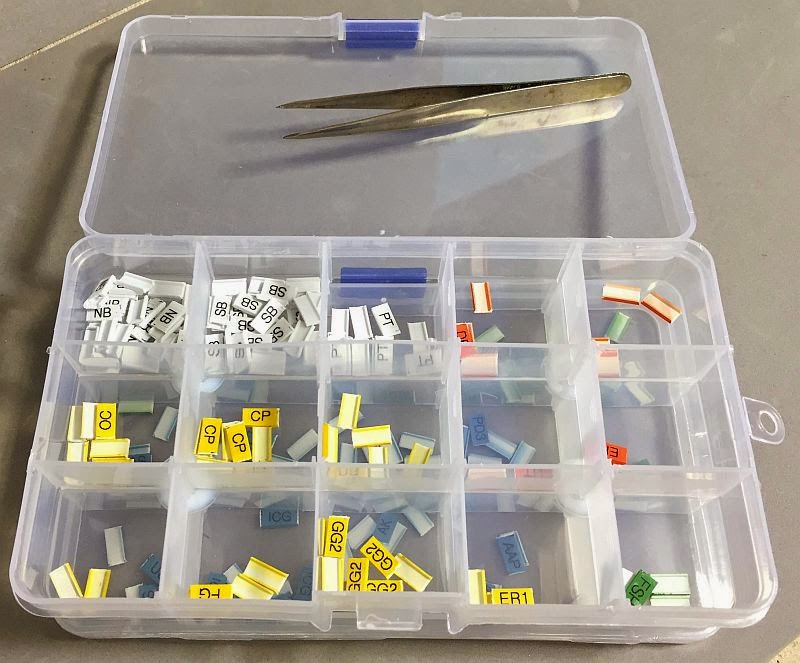 I still plan on using the Wheel Report to generate the needed traffic as it works well, but as I was deciding on the colors and markings, it occurred to me that there would be a few bonuses from using this method that the Wheel Report does not offer.  One, there will be less paper to print off and carry around and two, with the Wheel Report I never had the option to call out the pick-ups, we just let the local crews decide which and how many cars needed to be picked up and brought back to El Dorado yard.  The El Dorado crew then randomly set out a batch of cars on the A/D tracks to be picked up by the four manifest trains that returned them to pool tracks in the main yard.

With the use of the White tabs, I can now dictate which train the individual cars will travel on and it will also force the El Dorado crew to sort the outbound cars onto North Bound and South Bound trains.

Each tab is marked for each industry and track number.
Example:
Calion Lumber has a house track and yard track.
CH - Calion House
CY -  Calion Yard

I've told several of the guys that I plan to do this and they all sound excited to give it a whirl.  So I guess we'll see how it turns out on the next ops session.  I'll post the outcome.