The rumors were true.

During the last couple of trips to Malvern, I had heard rumors that the W&OV was looking to replace their two large ALCo Centuries [a C628 & C630] with three smaller ALCo B-B units.

Yesterday I heard some chatter coming over the scanner that there were some new visitors in Malvern.  I grabbed my camera and made a mad dash to the engine shop.

There..... sitting on display were three smaller B-B ALCo's.  One RS11 bracketed by two C420's!  They are of course all second hand units, but what a sight for ALCo fans!  These were so new they haven't even received their new markings yet.  The first one is a Lehigh Valley yellow jacket, the RS11 is a Maine Central and the second C420 looks to be an ex Lehigh & Hudson River with CR paint-outs still in place.

The two big ALCo's are still sitting on the far track and I wonder how long they will be around or before they get shipped off to their new owner?  Better try to get some shots while I still can.

I got talking to the engine house foreman who let it slip that the old D&H RSC-2 might also be replaced.  He said they were looking at a smaller ALCo switcher, he mentioned something about it being an S-2?

An added surprise was the yellow caboose tacked on behind the L&HR unit.  It looked like it might be an ex-MoPac caboose that got painted in the Borg colors?  I didn't see any markings on it other than the road number.  This should make a nice replacement for the old North Eastern style crummy that they had been using.  I bet the crews will be happier.

I've always been a fan of ALCo's and thought this would be a good chance to show my love for them.  I had the two Centuries for some time now and they worked fine but they just seemed to be just a bit too big for the little short line.

I picked up the L&HR from a buddy who was thinning his herd and thought if I could find a couple more that these might be the ticket.  What I really wanted was an RS11 in the Lehigh Valley Cornell red or maroon scheme, but I stumbled across the Maine Central and since yellow weathers real nice, I thought I would give it a try.

I plan on weathering them up pretty heavily but leave the original road names & numbers in place and add a small stenciled W&OV  under each cab.

The caboose is a Bluford Shops ex MoPac that got repainted after the merger.  I thought a yellow caboose would look good instead of the typical "Red Caboose" plus these are super nice models!

I suppose in the real world time frame that I'm modeling [1983], the Lehigh Valley Yellow Jacket would have not been the proper scheme for a second hand loco as this was not the last scheme that these wore, I believe it was the Cornell Red.  But then again the Rock wasn't around in 1983 either! Maybe I'll have to keep my eye open for another LV C420.  I think Atlas has announced a C420 or RS11 in Cornell Red or Maroon.

If anyone has one of these that they'd like to part with, I bet the W&OV would be interested.

Sounds of Construction in Malvern, part 6

After a month of working on the Crushmoore building I think I've reached a point where I can call it good and move onto the other buildings in Malvern.  There's still a lot of smaller details left to be added such as piping, weathering and misc items which I can do at a later time, but at least now I can get it located and start in with ground cover.  I still need to add a small parking lot on the right side by the office, this I want to try using some roofing felt for an asphalt lot.

The last thing I added was the roof top details.  These were all made with LEGOs except for the Air Conditioning unit on the office, I think this was a Burt Industries detail. After gathering all the pieces I wanted, I glued them together and painted them an SP Lark gray and added silver to some of them for a bit of variety.

Using LEGOs for details is a great alternative to buying pre-made details and the possibilities can be unlimited.  What a great idea! 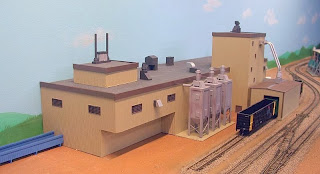 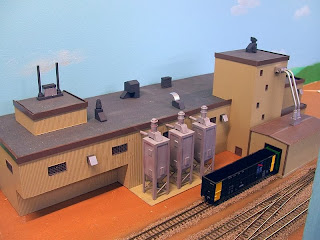 While this may not be a masterpiece of a model, it has taught me that scratch building is not as hard as I once thought.  It can yield a unique structure that you can't otherwise find on the open market and one which you can fit the area that you have.

This was a fun build and I'm looking forward to doing more of the same throughout the layout.

Thanks for following along.