After getting the backdrop painted, I started to work on the track plan and building footprints for El Dorado.  As I said in an earlier post I want to keep things to a minimum if possible.  No yard, just the main line, a siding and a few industries.

The siding was shortened on the south end (right) but it will still hold a train with three locos, 21 car and caboose, which will probably be more than I'll ever need.

This is what I came up after a few hours of doodling. 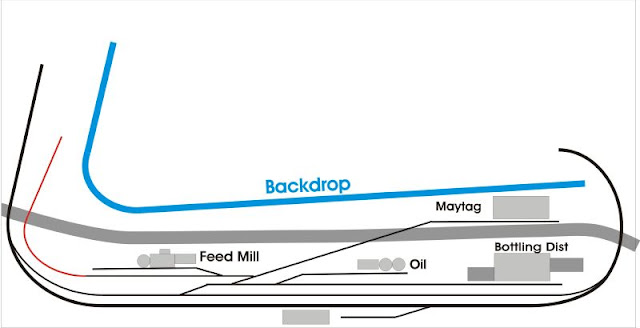 I drew it straight but I kept the swing in the tracks as I plan to keep the depot as part of the scene. I also flipped the house track, mainly to balance out the switching moves between the NB and SB local.  This plan gives the SB local two moves: The house track and the Mill.  The NB local can service the Oil Co, Dr Pepper Dist and the Maytag Dist.

The feed mill might be a little awkward to switch and may not be prototypical?  The track that is below the mill is an old track that went to another defunct industry.  Originally it was the drill track for the old yard, but I plan to keep it in place, model it weeded over and I may keep some MOW equipment parked there to add to the look of the town.

I still need to get the mill track and the old lead in place and secured temporarily.  Here is where I'm at as of this posting. 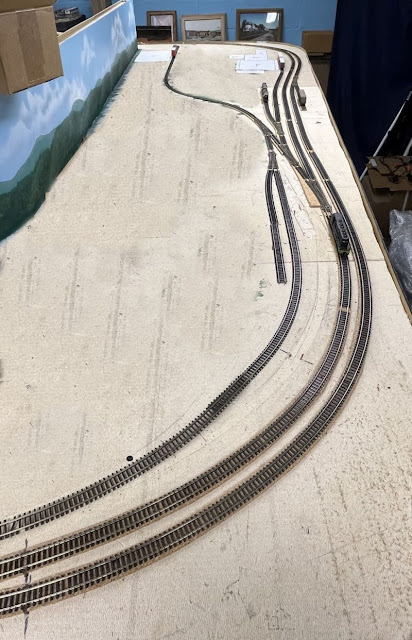 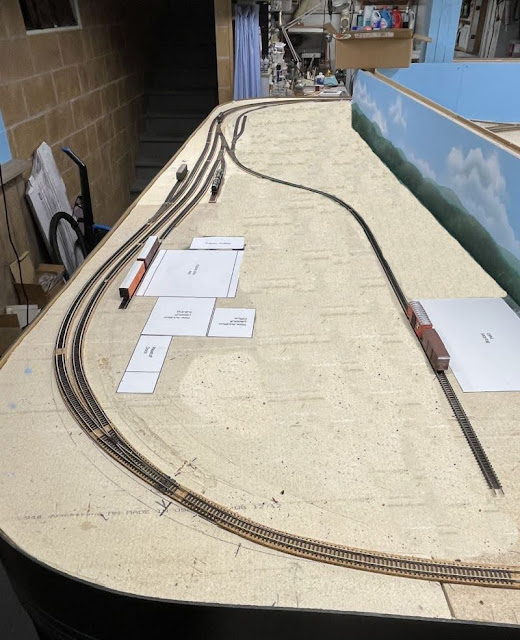 I watched the clouds roll in over El Dorado this morning.  I did these the same way I did the others a few years back:

Foliage on the closer hills

Found some time tonight get the closer hills painted with foliage.

It took me a bit to find the pattern I used several years ago, but I think I got it pretty close to what I did before?

I left the foliage off the area right behind the bridge scene as I want to carve the river banks and then sling some plaster cloth and plaster to get the banks formed, then I can come back add the foliage. 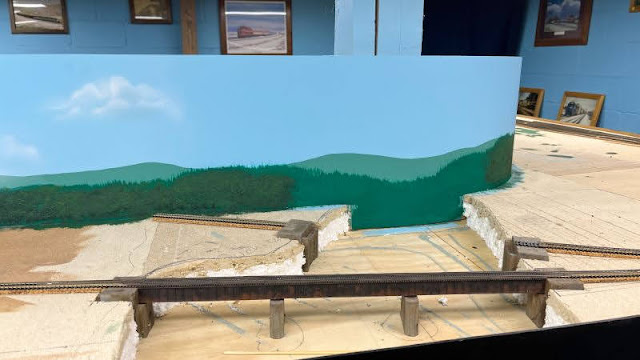 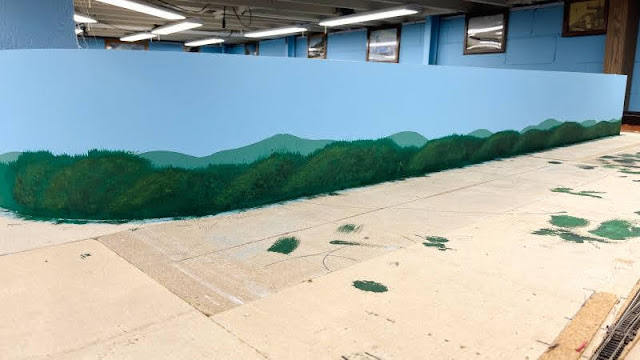 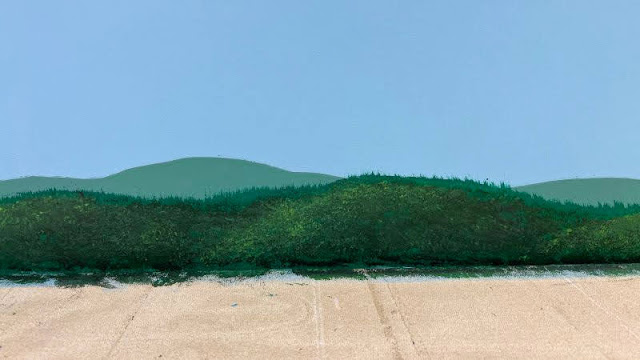 Next comes the clouds...

The Paint I used for the backdrop

Answering DandHColonieMain's question on the paint that I used for my backdrops.
To be honest, it's a little too rich, it could be a tad lighter. 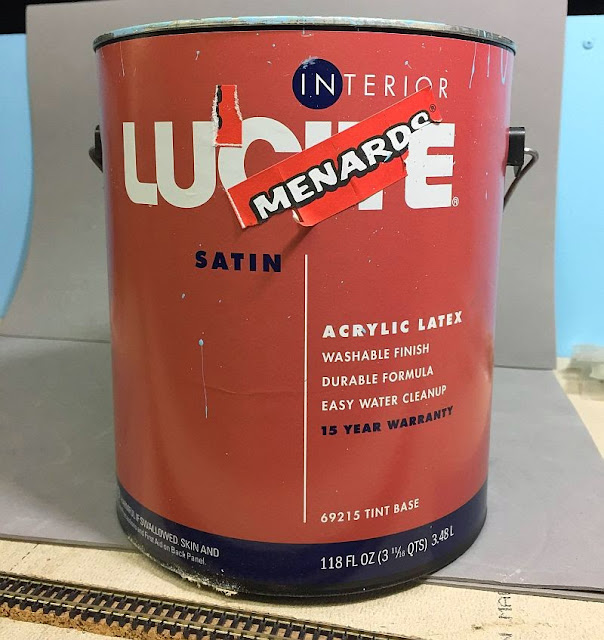 The hills of El Dorado

After getting the pan head screws removed, filling in the seam, countersinking the new screws and spackling over them, I was able to recoat the backdrop with a fresh coat of sky blue.  Then I got the distant hills painted on tonight. 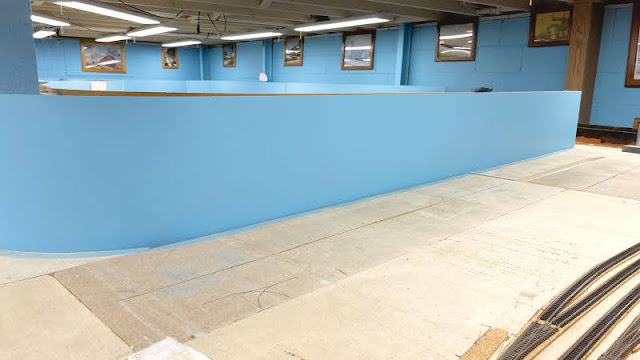 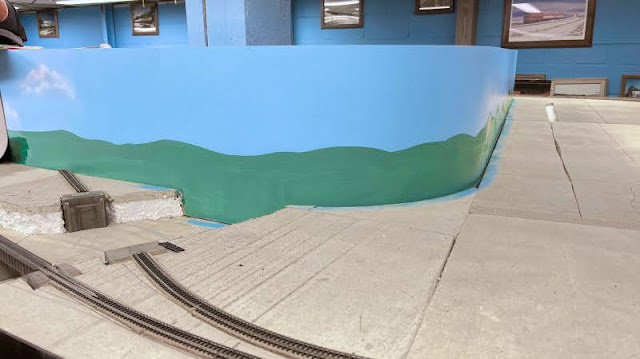 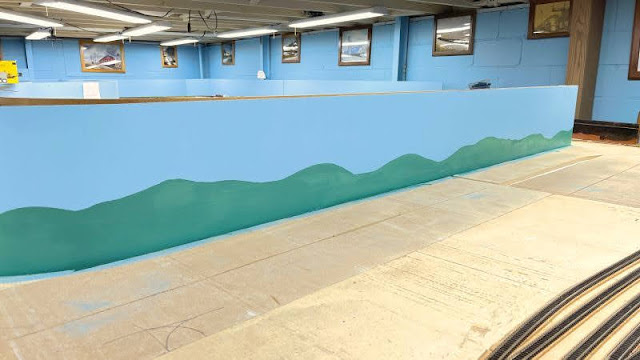 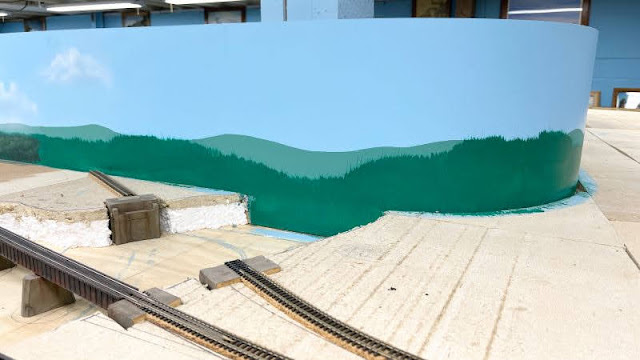 Once this dries and I get a little time, I'll start painting on the foliage of the closer hills using these craft paints like I did before. 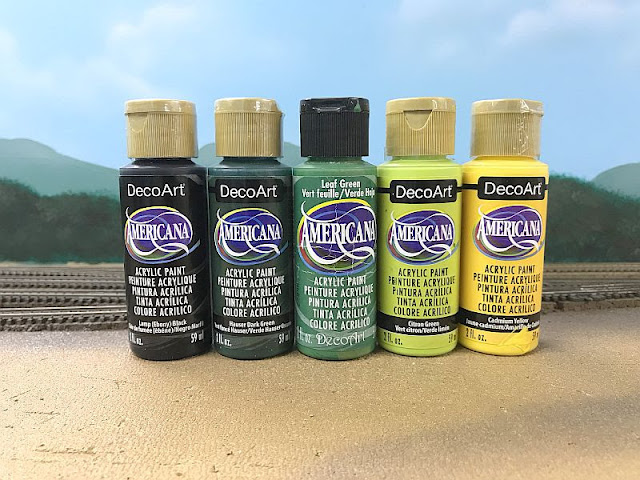 A clean slate in El Dorado

With my whirlwind of locomotives behind, I think I have had enough of the bench time for awhile?

It's time to get back to the layout.  My first target is El Dorado.

When I first started working on El Dorado I had planned it to be a busy location that had a small four track yard, two A/D tracks and the longest siding on the layout.  The plans were to have two locals work out of for the entire layout.  This worked well and we had a lot of fun with it and kept the sessions fun full of operations.

As I have mentioned before, time moves on things started to change.  The sessions slowed and the crews dwindled and I decided to reduce my operations.  With this a lot of changes have and are changing.  El Dorado  is on the list and I have decided to start here.  I am going to try to conform to and hold to the old motto "Less is More".

A few years ago, when El Dorado was in its prime it was hopping place.  Here's an image of what it use to be. 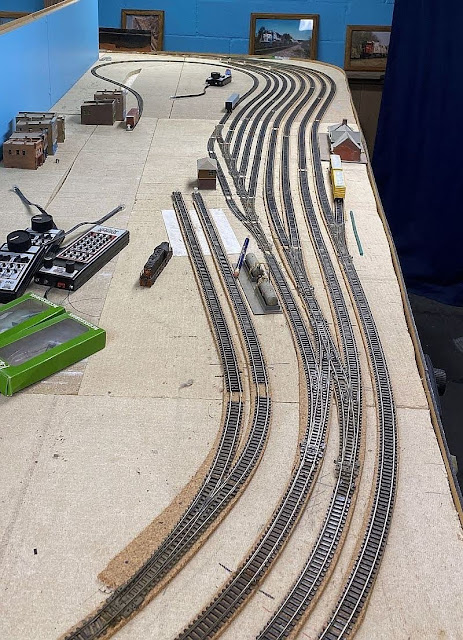 I decided that I want to go back to my original plans for the layout with it being nothing more than a backwoods branchline of sort.  This means a lot less traffic and nothing more than a string of small towns with only a few industries being served by a local.  So the yard had to go.

After doing a little doodling I came up with this new look for El Dorado.  Also as I have said in the past, I am not modeling the line exactly so I can make full use of my modelers license. It's not to scale, but it's close enough to get started with. 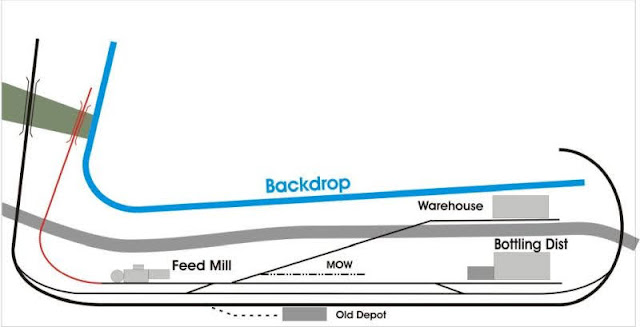 I'm hoping to get the feeling of a small town with a two lane blacktop running down the middle of town, with a few industries to work, and the tracks passing through the edge of town.

Over the last few days I've ripped up the majority of the tracks and have reduced it to the mainline, passing siding and the two A/D tracks, both of which will be removed in time.

I've got the industries pretty much decided on and their locations, but I need to get a feeling of their size before I can really get down to laying the tracks.  One of them; The Dr. Pepper Dist will be fairly large and will be made up of several building kits that have been added on to the original building over time.  The Depot will remain, but will be an actual kit this time.  For the Maytag warehouse, I'm thinking about using the DPM Wood Furniture kit and for the mill, well it's built and ready to install once I find a location for it.

Tonight I figured I'd better make sure the depot would fit the same location where the stand in has been sitting.  So I dug out the Walthers Clarkesville depot and set the foundation in place, and it fits.  So the tracks won't have to move now. 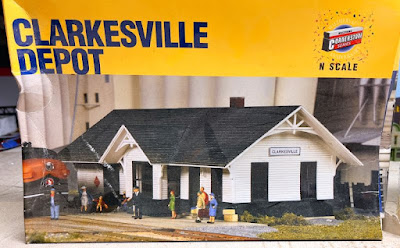 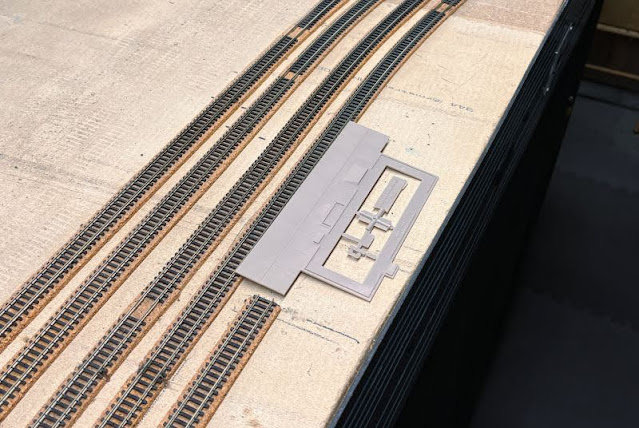 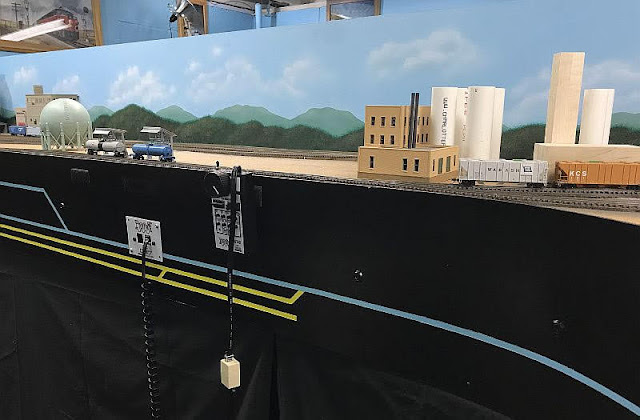 So tonight I cleared things off and got a clean slate to work with. 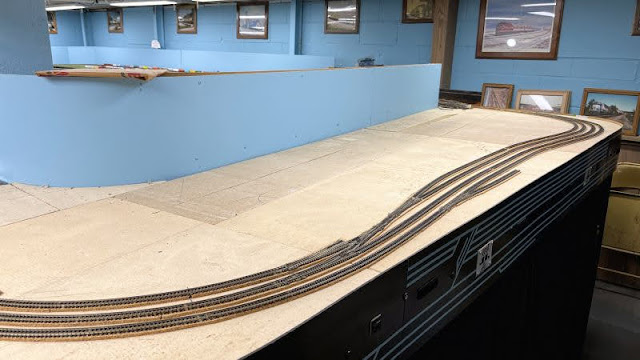 The first task will be to remove the panhead screws I used to hold the backdrop in place and replace them with some #6 x 5/8" countersink screws, then patch them with spackling and repaint.  I'm also gonna have to do something with this seam? 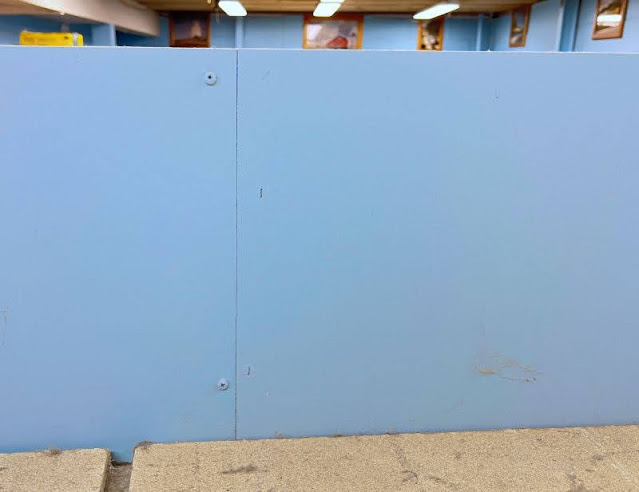 I'm making this post for a friend and follower who said he really like the way my number boards turned out on locomotives.  So here ya go Dave.

Myself I do not like the way the number boards light up when the lights are turned on, most of the time they are way too bright and kind of diminish the headlight, so I completely blank them out.  Generally the molded number boards do not come out even with the face of the cab or rear, they are recessed into the openings a bit and if you try to decal them with numbers, a lot of the times they exaggerate the convexed look.  To be honest, there area few different ways modelers have overcome this issue, but this is my way of doing it.

After the the locomotive is completely weathered, I insert the window/headlight/number board glazing into the cab and in the rear of the loco.  Then I mix up a small batch of  2 part 5 minute epoxy and very carefully use a toothpick and fill in the number boards.  I keep applying it until it's flush with the outer surface.  It's self leveling but I keep an eye on it until it starts to firm up. 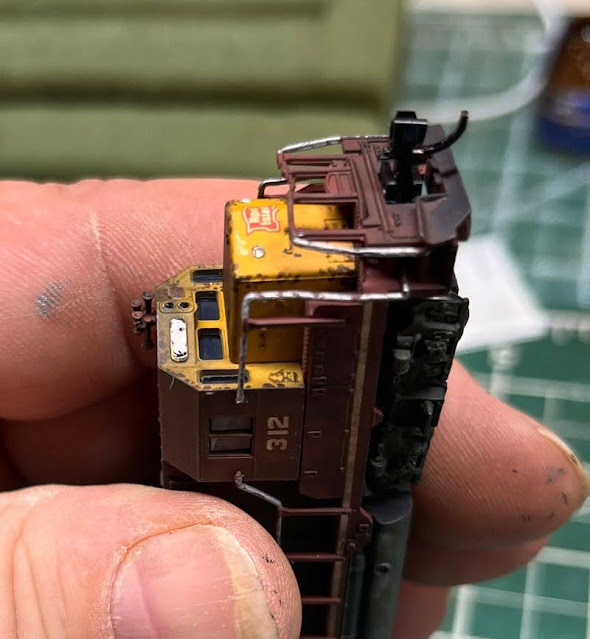 Once the epoxy is completely dry, I paint it with a flat black paint, this will help to block any excess light. 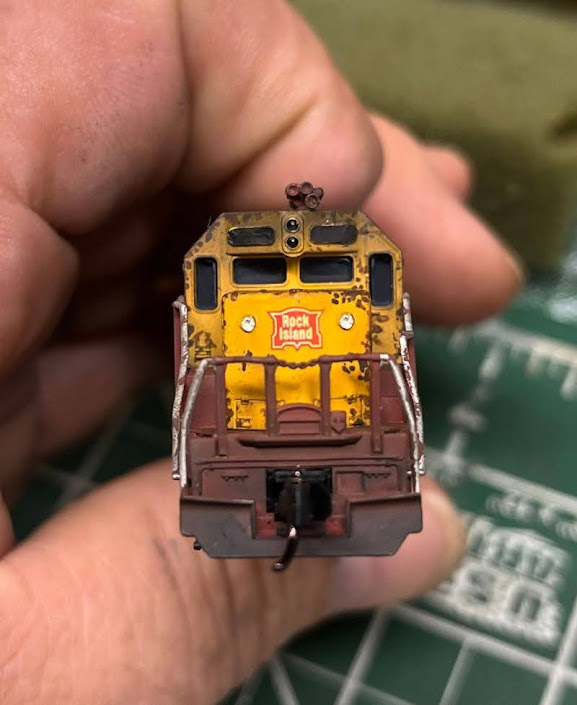 Once the paint is dry I apply the proper number board decals that are supplied in the decal sheet.  I also come back a bit later and apply a decal solution set the number boards in place.  My choice is Walthers Solvaset. 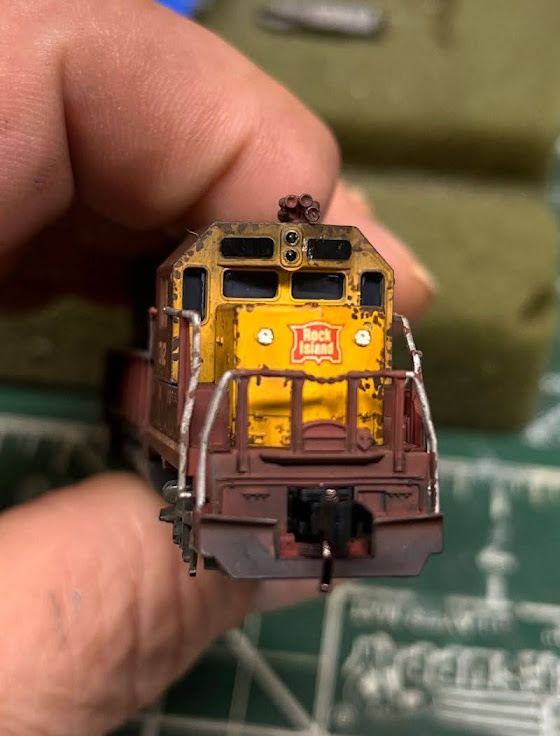 The decals I use are ShellScale Decals, they can be had in several different styles, designs and scales.  For this loco I used "N-117" which came with black number boards and 8" white numbers. 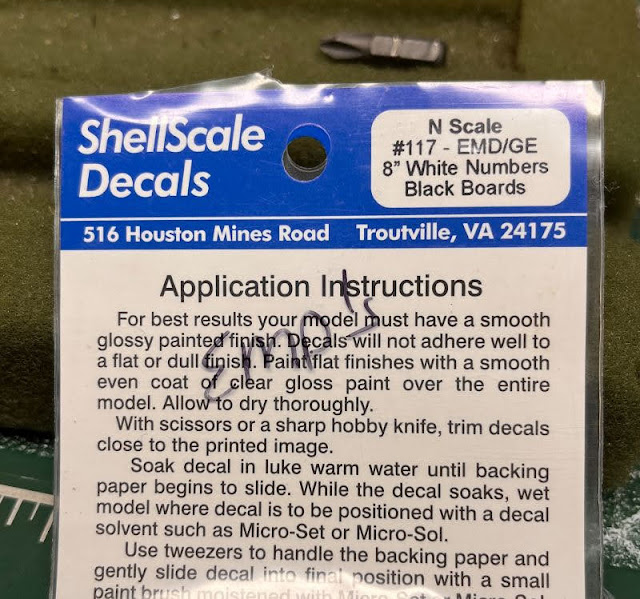 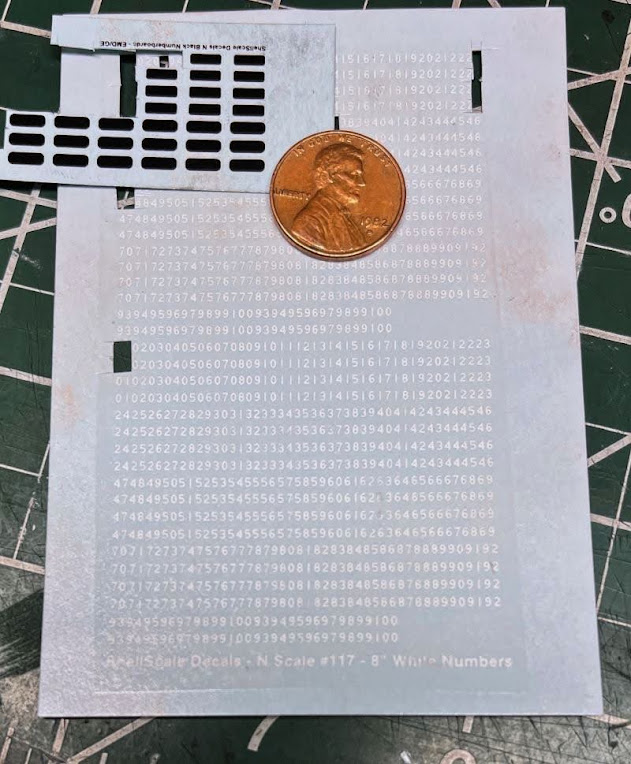 I cut out the correct numbers and apply them on top of the number boards and when dry I apply the Solvaset and later a layer of Dullcote using a small brush. 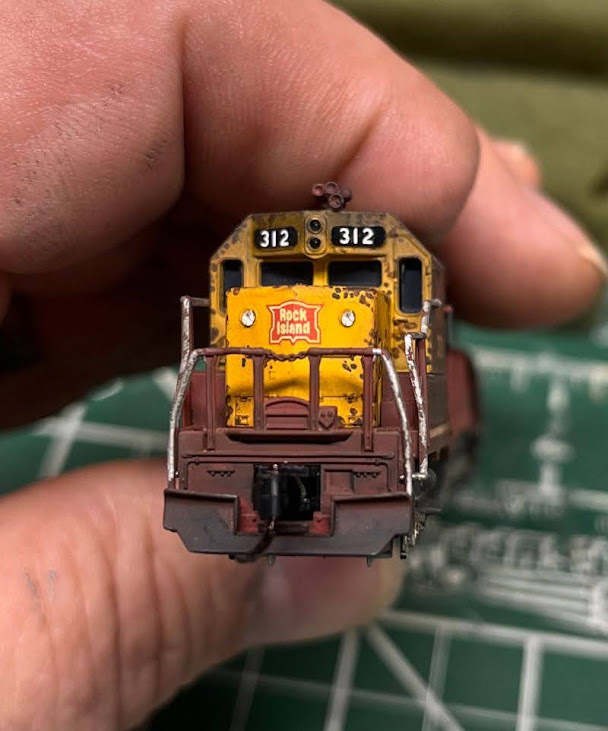 Like I said, this may not be for everybody, but it works for me.

Here is the address for ShellScale decals

Fading can be done with several different methods, all with good outcomes.

You can use the White Wash method where you spread thinned white Artist Oil paint on the model, then remove most of it with a "Q" tip.  Spray on an extremely thinned paint wash and build it up to a desired level or the Oil Dot fade where you apply several different colors of oil paint and then brush them altogether with a brush damp with mineral spirits.

I decided to try a version of the Oil Dot fade but with Pan Pastels.

I kept forgetting to get pics when I was working on the recent U33B and GP35 shells, but I did manage to get some shots on the last fuel tank I did.

I started out by painting the fuel tank with TCP Rock Island Maroon and then gave it a good coat of the Dullcote to give the surface tooth for the powders to grab on to.

In this case I'm using three colors of Pan Pastels: Yellow Ochre Tint for the fade, a rust colored Pan that is lighter than the Rock Island Maroon to keep the color close to the base color  and finally black.

I start by dabbing my brush into the Yellow Ochre Tint and lightly padding it on the surface of the tank. 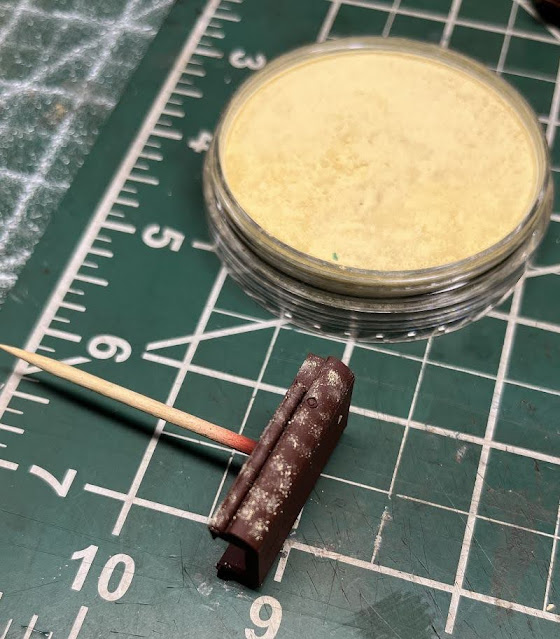 Next I do the same thing with the light rust color. 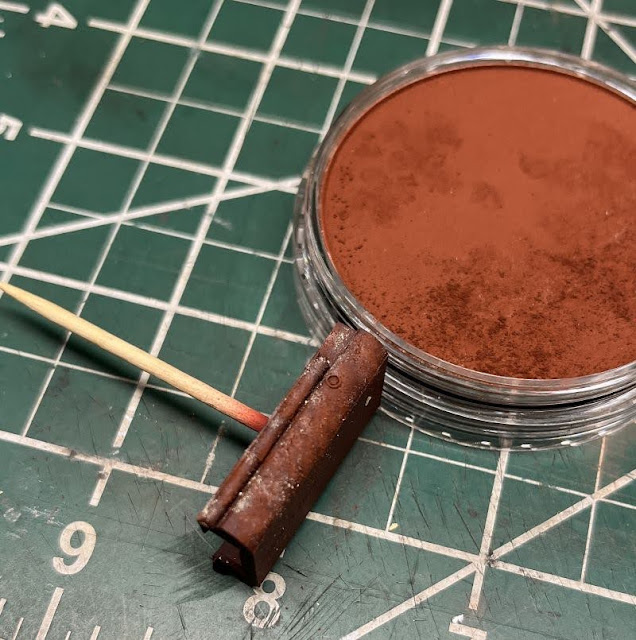 Then using a scrubbing motion, I work the two colors together on the tank. 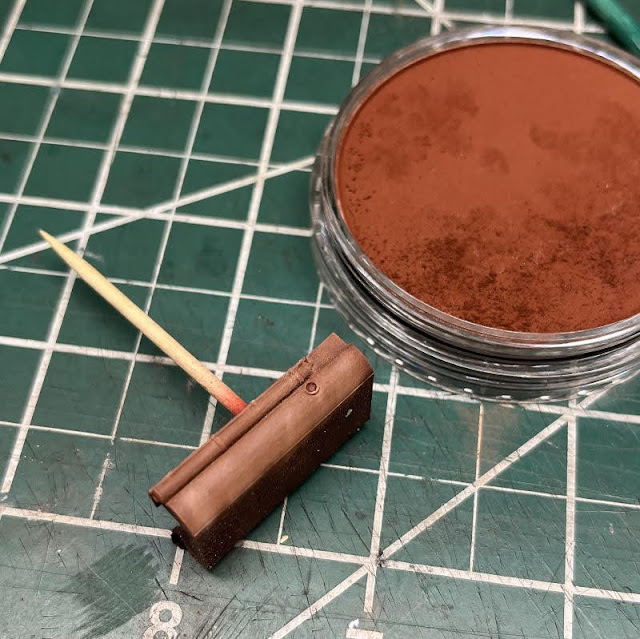 Now the lighter colors tend to fade and disappear when you shoot Dullcote over them to seal it, so I apply the pans heavier than I need and start by misting multiple light coats of Dullcote.  By doing this, the Dullcote is almost dry by the time it hits the surface and doesn't affect the Pans Pastels as bad as it would if you shot a full wet coat.  If you watch closely you can see some the colors disappear, if this happens, simply re-apply another coat of the Pans as you originally did and then keep misting the Dullcote and let it dry between coats.

Eventually the Dullcote will build up enough to seal off the Pans, once this happens, allow the Dullcote to dry thoroughly and then comeback and shoot a full wet coat of Dullcote to fully seal things.

After that I hit the tank with black to give it a sooty or oily look and seal it with another coat of Dullcote.  Eventually I applied some Tamiya Black Panel liner to give the tank an oily, greasy appearance. 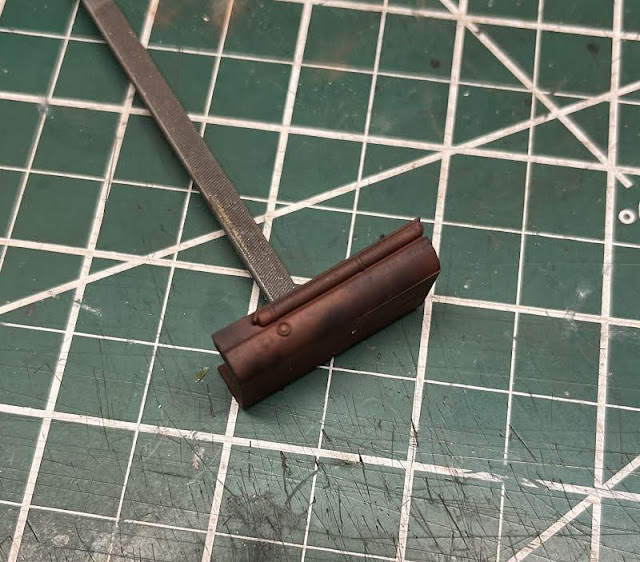 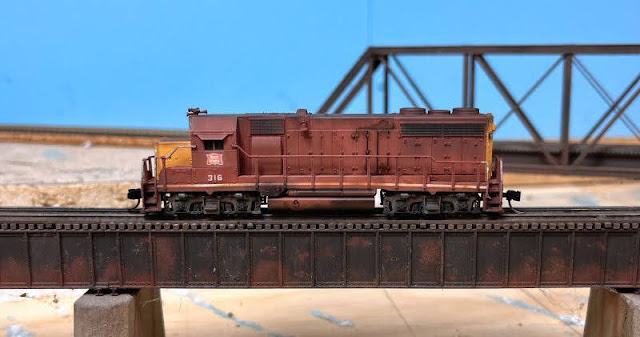