Last day of the 2018, first section of Gavilon's main building has begun. 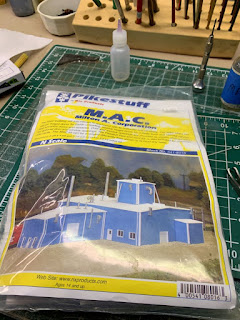 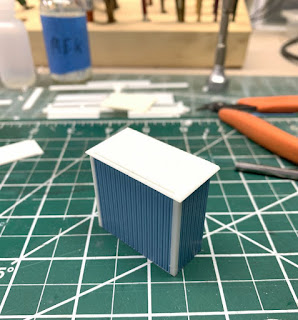 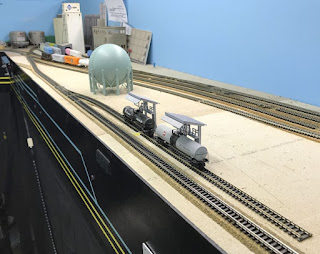 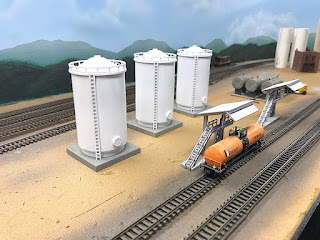 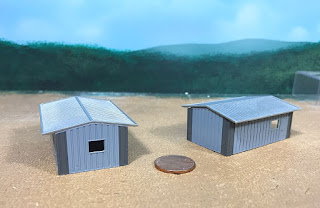 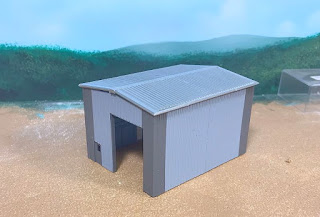 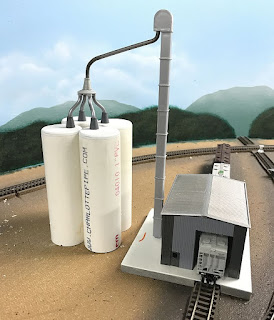 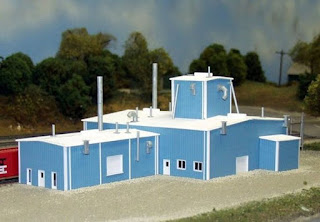 A thorn in my side....now removed

One of the car types that is a staple on my layout is the Atlas 42' Pulpwood car.

I love these cars but they have always been a thorn in my side and a constant source of  aggravation due to it's light weight when it's ran empty.  Also I've never been a fan of the Atlas Accumate trucks and couplers.  They never seemed to roll as nice as MTL's and the coupler pins would work their way out and catch on the track and then the couplers would explode rendering them useless.

In the past I tried swapping the trucks with MTL trucks but their coupler boxes sat too high and rubbed on the underframe, then the trucks would sit tilted forward.  So I've gritted my teeth every time we had an Op Session hoping they would make it through without causing any issue.

In the past month I started on another project (ugh) that's been on the back burner for sometime as well, going through and thinning the herd.  While getting that under way, I also started swapping trucks and couplers over to some of my newer cars.  Once I got that done and got them put away in the proper drawers, my attention turned back to these pulpwood cars. The time had come to see what I could come up with.  I had an idea?

Recently on another quick project I tried using one of the TrainWorx #620 body mount couplers that they designed to use on the older Precision Master's and Red Caboose covered hoppers so they had body mount couplers.  I tried one of these to convert another Atlas tank car, one that Pat Sanders hadn't tried yet. Using this conversion kit gave me an idea for the pulpwood flats.  I decided to try the #620's on the flats, but alas the lids were too thick and the couplers sat too low.  I tried using a MTL 1015 and body mounting one to the pulpwood cars and after a little experimenting I found that this would work better.  Since the frames were metal, I didn't want to go to the trouble to tap and drill them.  On the #620's Pat Sanders used super glue to mount the couplers to the tank cars but I've never been a fan of super glue, to me it always seemed to get brittle and let loose after time, so I opted for a 2 part, 5 minute epoxy.

I tried one out and it seemed to work just fine.  The coupler did pop off the next night while giving it a pressure test.  The epoxy had dried, but the issue I believe was due to the slick Derlin that the 1015's were made from.  I took my #11 blade and scratched the top of the coupler box and also the area on the frame where the coupler would be glued to.  This gave the glue a little more tooth to grab to and I wasn't able to get it to come loose. 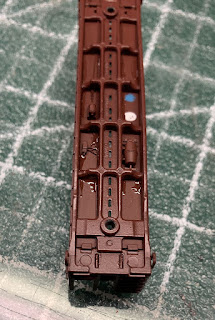 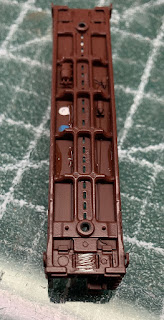 After several nights of assembling enough 1015's to convert all of my cars (and allowing my eyes to uncross and my fingers to uncramp) I started gluing them to the cars.

In the last post, I weighed my IMRC 60' flats cars with small buckshot and after posting them, Rod Warren mentioned that I should try using a neat little product called Liquid Gravity.  It's basically very small, non lead based pellets that flows into and fills up the cavities much better than the buckshot I had used.

After doing a little research on the stuff I found a video from the manufacturer that showed the stuff and how to use it.

I found some on line and also picked up some super thin Super Glue. 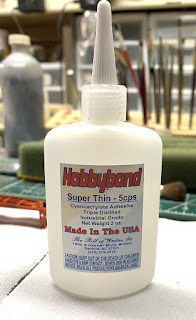 Once the stuff showed up I jumped at the chance to play with it!  It was a little hard to keep from having the pellets bounce all over, but I later filled the cars over a paper towel so that I could collect it and reuse them again.  Once I got the cars filled I then dribbled the thin super glue over the top of the pellets and it wicked right in and flowed out evenly.  Within 5-10 seconds the pellets were glued solid and I tipped the cars over to remove any of the loose pellets.

This added .2 ozs per car.  Not a lot, but enough to make a difference. 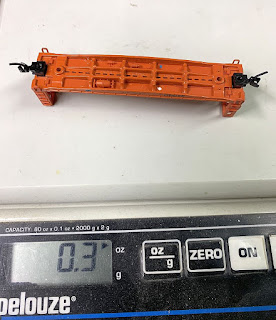 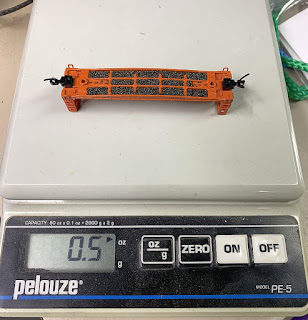 After adding the new trucks (without couplers) it gained another .2 ozs 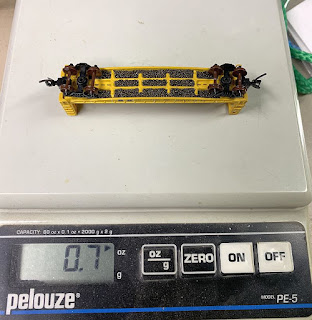 One issue I had with the couplers is they sat too low when the trucks were installed, so I added one of the little shims that is supplied with the trucks.  This did the trick, yeah...they may sit a little too high for looks but now they work!  Yes, they'll be a heavy little car once I place the original pulpwood load on them, but that's OK with me.

Thanks for the tip Rod!