Finally getting back to working on my GP18 fleet.  This will be my fourth and final GP18 as I decided not do one in the Blue and White.  There were only two GP18's that went through the CRP (Capital Rebuild Program) and when they emerged, they were classified as GP18M's.  About the only thing that they retained were the unique intake grilles of the GP18, other than that they were basically GP9's.
I chose the #1337 due to the paint scheme, it'll be in the late 60's maroon with yellow ends and this case it'll be wearing the bill board speed letting that usually adorns the Rock Island Red and Yellow units from the 70's.  I was not able to find and image of any GP18 in the maroon and yellow that carried the 60' Block lettering?  If they did I have not seen any pictures of them. 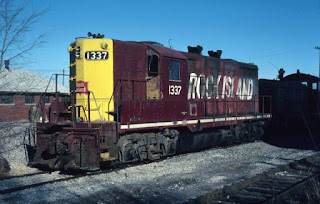 The previous three were factory painted, this one started out as an undec.  Last night I got the spark arrestors and the horn glued on.  This afternoon I got it painted using TCP paints.
It feels like an eternity since I've actually ran paint through my airbrush. 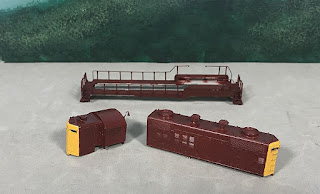