And now for something completely different!

Last weekend I had the pleasure to see and operate a beautiful HOn3 layout.

A buddy that I met back in 1994 or so, Judon Jones, invited our group to bring our Bend Track modules to Manhattan, KS and setup at their yearly Mall show with them.

Jud had several HO modules that he had built as a self contained HOn3 layout over the mainlines of the HO modules.  As time pasted he split away from the group and modified these modules as self contained layout which he and a another good friend of mine, Jim Hoover, would haul around to different shows and to several of the national Narrow Gauge Conventions.  Jim and Jud became fast friends as they both enjoyed Narrow Gauge railroading.  Jud was HOn3 and Jim was starting to get his feet with Nn3.

Several years ago while hauling them to one of our local meets, his modules were almost completely destroyed when his trailer suffered a catastrophic accident.   After a few years, he decided it was time to build the layout that he'd been dreaming about for years, and built he did!  He salvage what he could from the modules and came up with the rest.

He'd been wanting me to come down and see it for the last couple of years and I finally found the time to do so, and I'm glad I did.

I wish I had taken my tripod and camera along, but at least I took my iPhone with me, the next time I will.  I did get a bunch of videos and pics that I'd like to share with you today.  Please for give the quality of the videos and pics.

The details
The main layout is supported by base cabinets that Jud built in place.  These serve as both storage and support for the layout.  The frame work is built with box construction or open girder construction and can be dismantled with ease should the need arise, complete with instructions for the dismantling.  The sub roadbed is supported with risers.

The track is mainly laid with flex track complemented with sections of hand laid track in a few location.  The turnout are all hand built.

Jud chose to go with Digitrax for the DCC system which is radio equipped.
The locomotives consist of mainly Blackstone models and few brass locos, all of which are equipped with Tsunami Sound chips.  Most of the rolling stock are either kits or scratch built and are also equipped with Blackstone trucks and wheel sets.

All 27 turnouts are powered with stall motors and are controlled with DCC as well.

The Story of the layout
The entire layout is fictitious.  It's modeled in the modern day, but before SP and Uncle Borg took over the Rio Grande, and was built using antique equipment, and is patterned and operated much like the Cumbres and Toltec RR.That is say it not only does it earn it's keep, it's also a living museum.

The idea was to build a road from scratch starting in LeVeta, CO and running up to the town of Cuchara, CO 12 miles away to serve several gold and ore mines, oil wells and livestock as well as provide passenger service for both the locals and tourists.

Here is an over view of the entire layout.  It takes up an area of about 16' x 20', give or take a bit.
LeVeta is in the foreground and Cuchara is on the higher peninsula on the right.

A shot of the proud owner 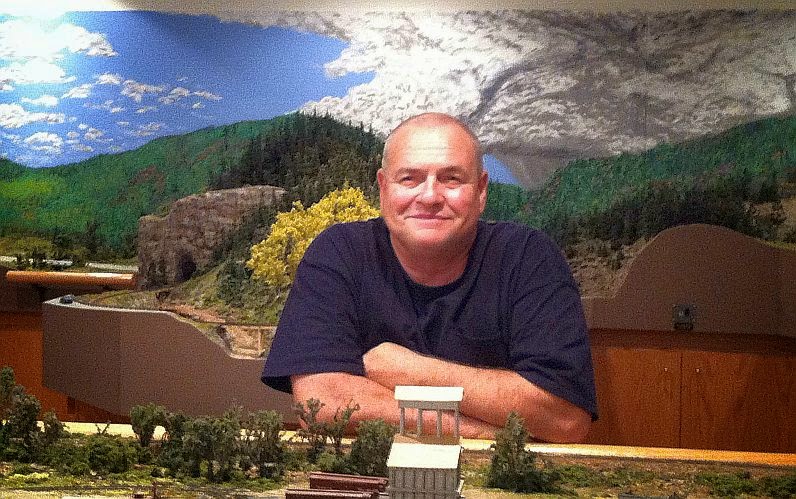 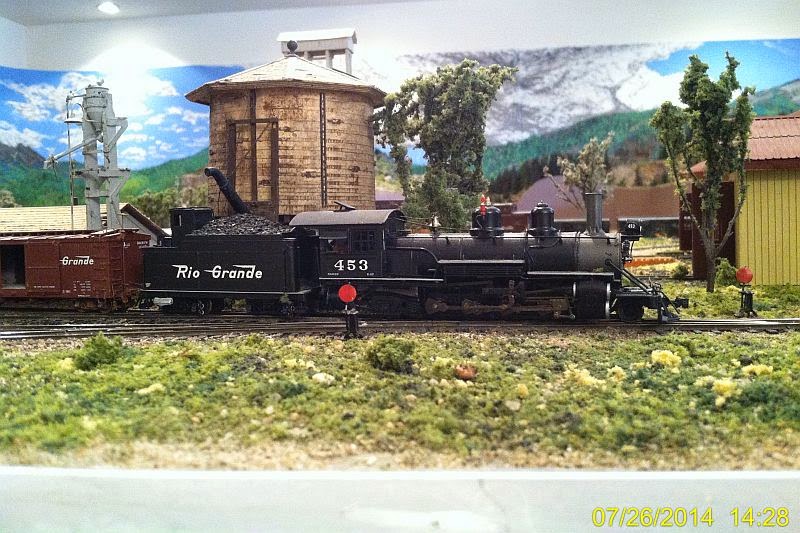 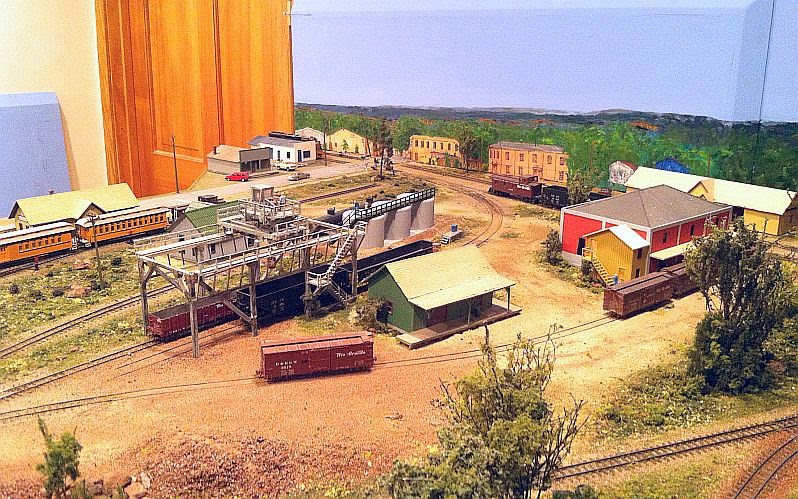 Shots along the grade in sequence 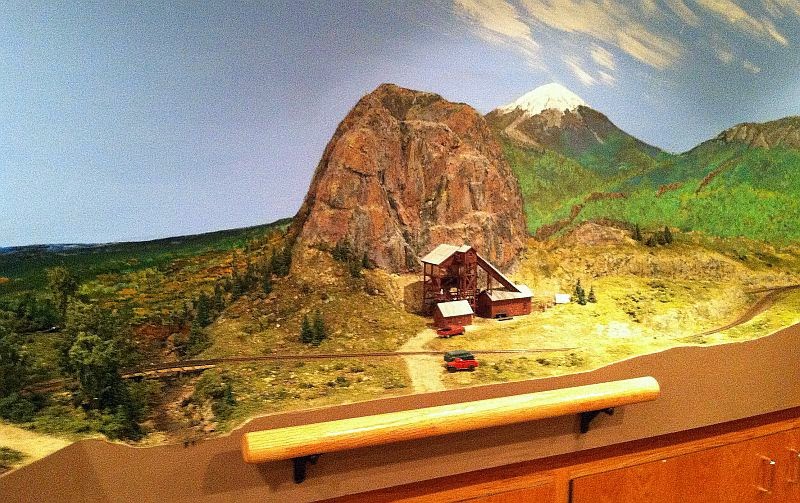 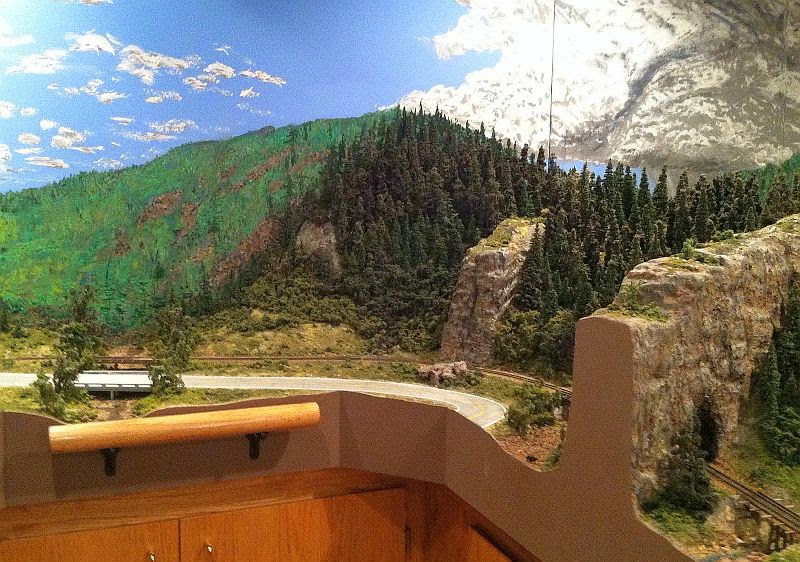 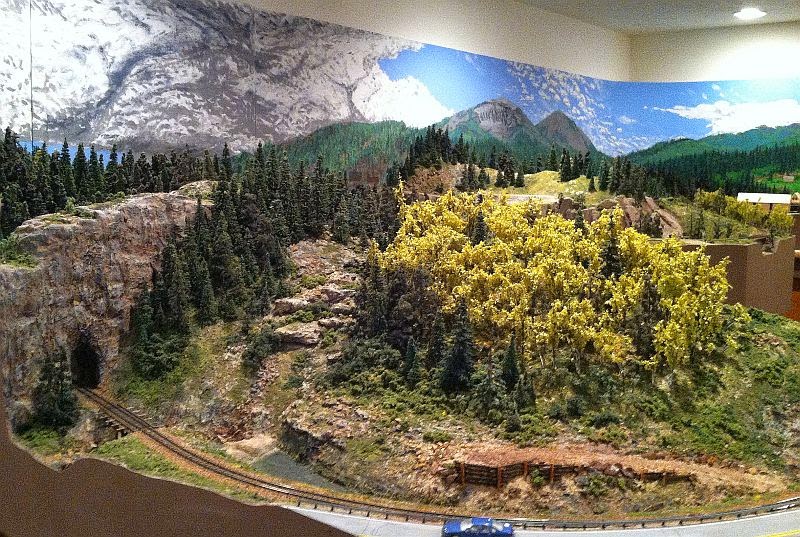 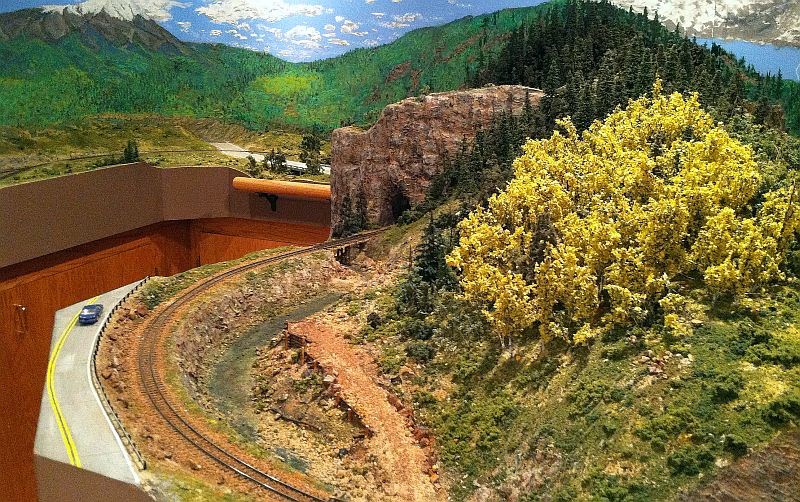 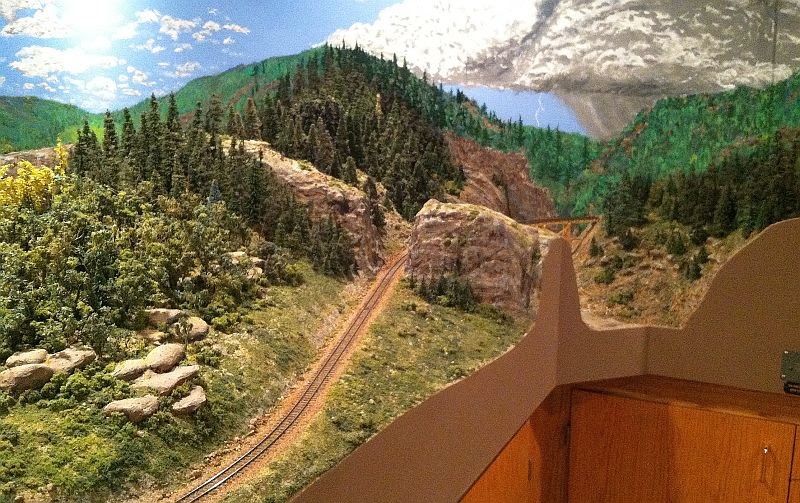 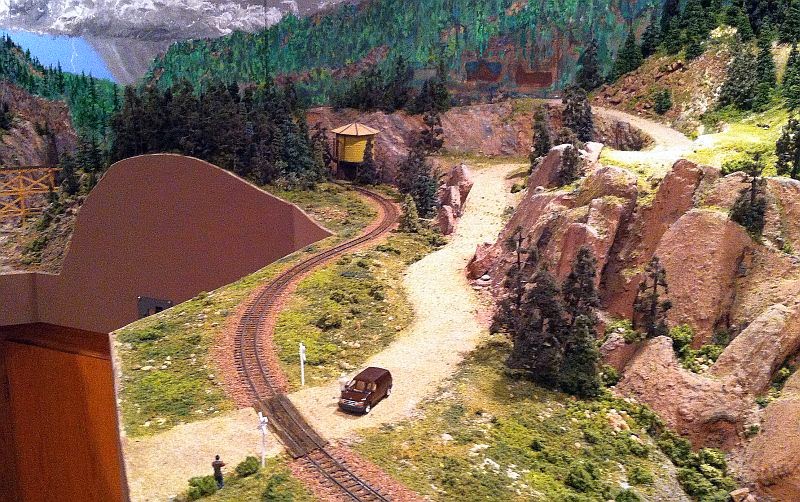 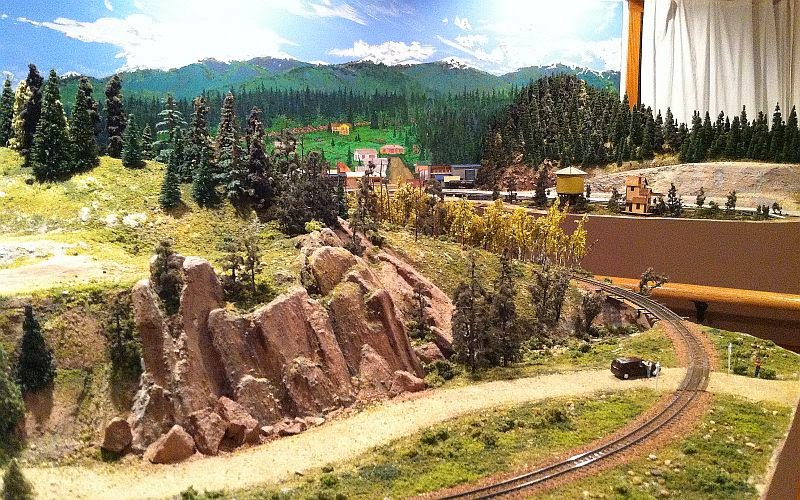 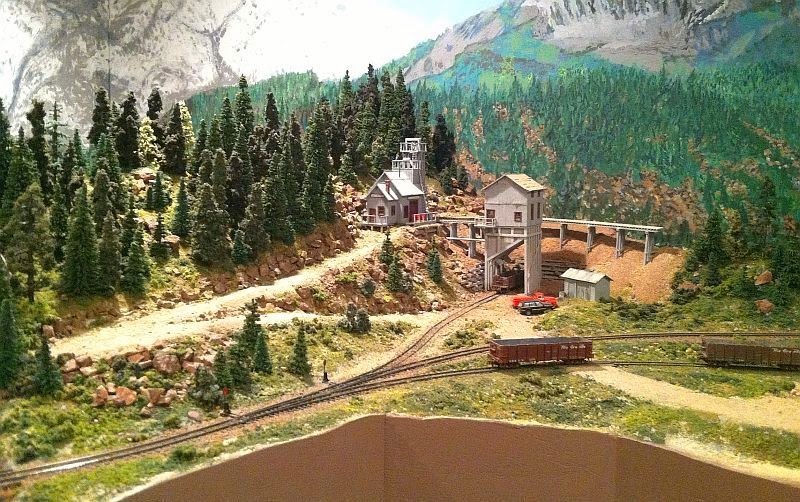 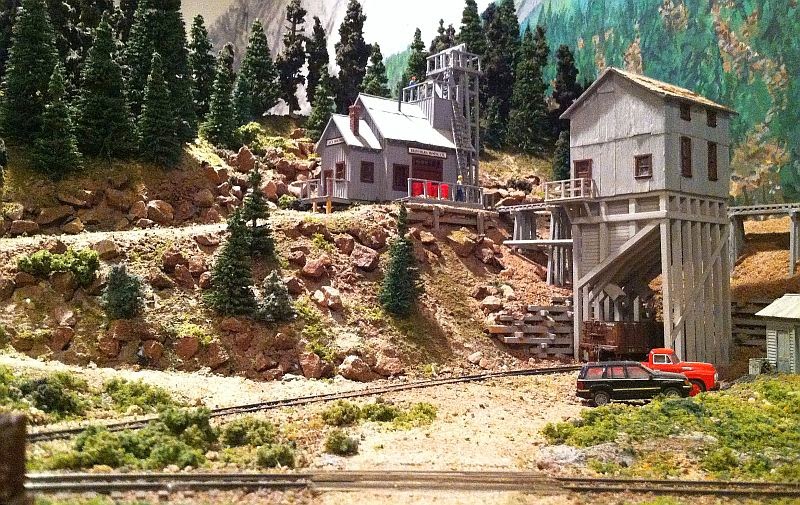 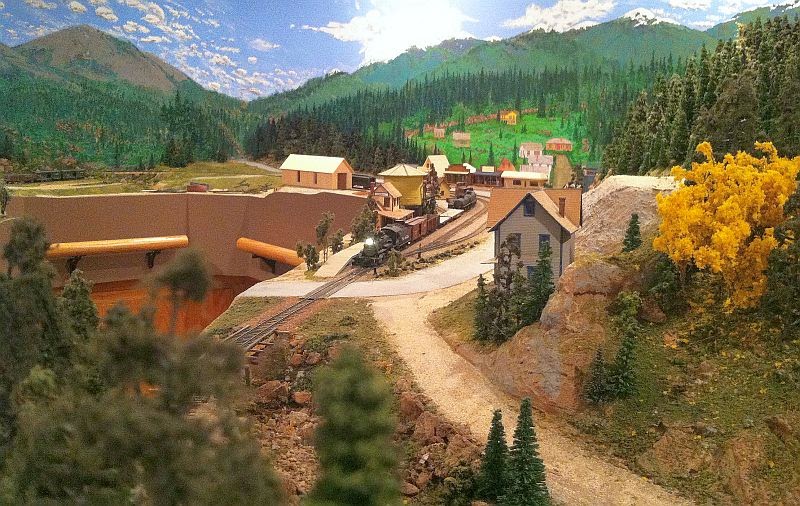 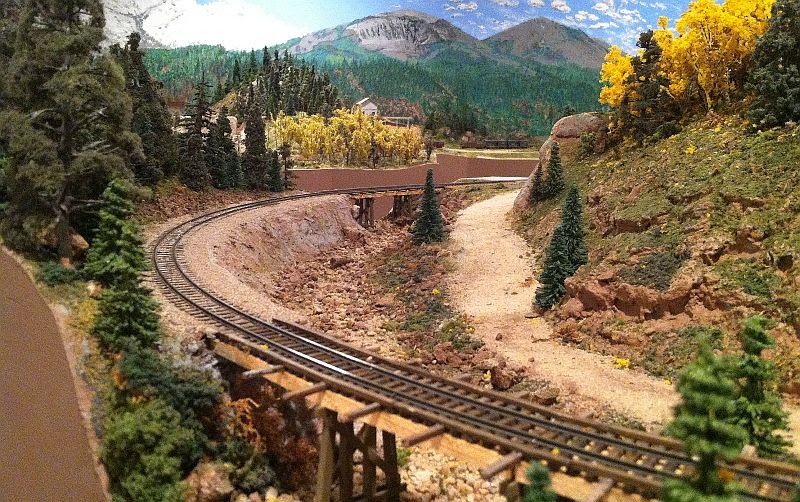 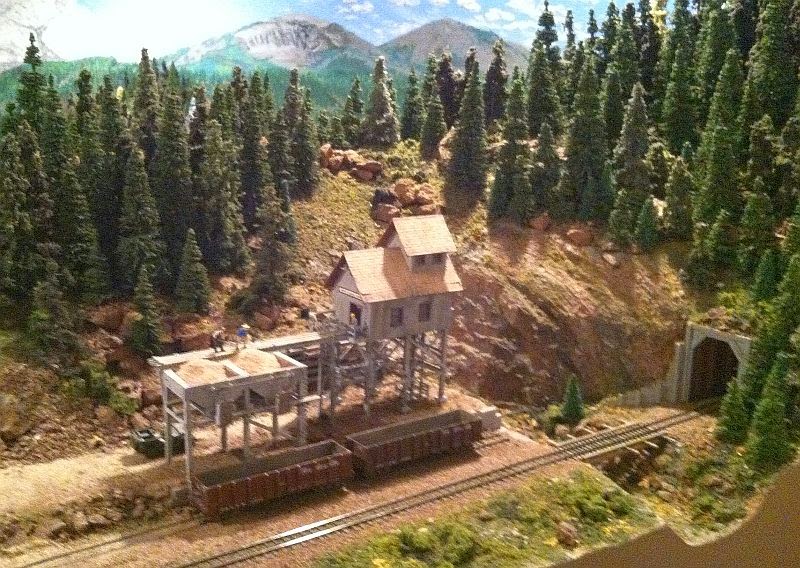 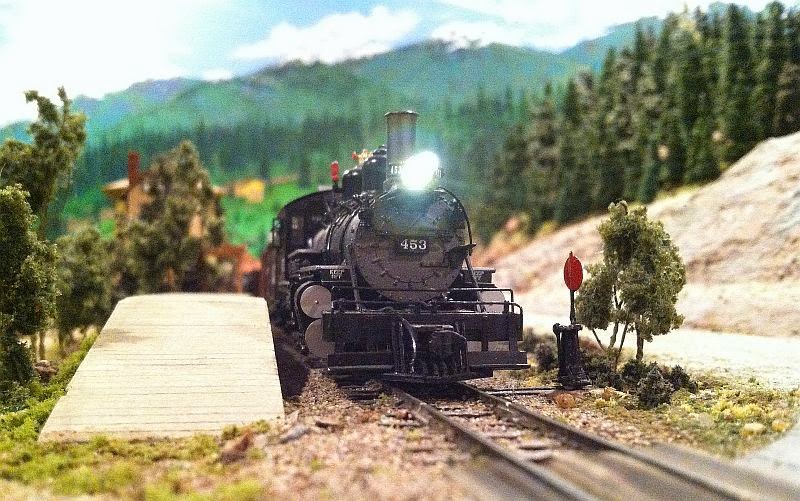 I also took several videos that I put together to make these two videos as well.  In the first one we'll follow along as #453 assaults the 2% grade from LeVeta to Cuchara.  The second we'll chase it back downgrade from Cuchara to LeVeta.  Keep an eye open and watch for the foamers.

A special thanks to Judson


For those of you who didn't know Jim, he and Jud became very good friends as they shared their love for Narrow Gauge railroading. As a result Jud felt compelled to keep Jim involved with the hobby and his life.  He couldn't wait to show me this special part of the layout. 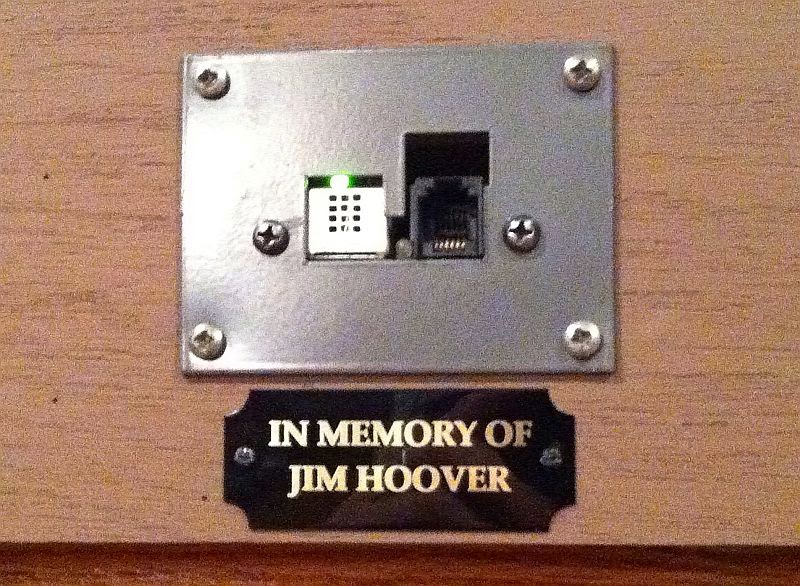 Jim played and integral part of Jud's layout even though Jim never got to see this layout as he passed away before Jud started the construction.  Jim not only helped Jud with his old modular setup, repairing locos and helping out with the different shows that they attended, Jim also introduce Jud to DCC and sound!!! 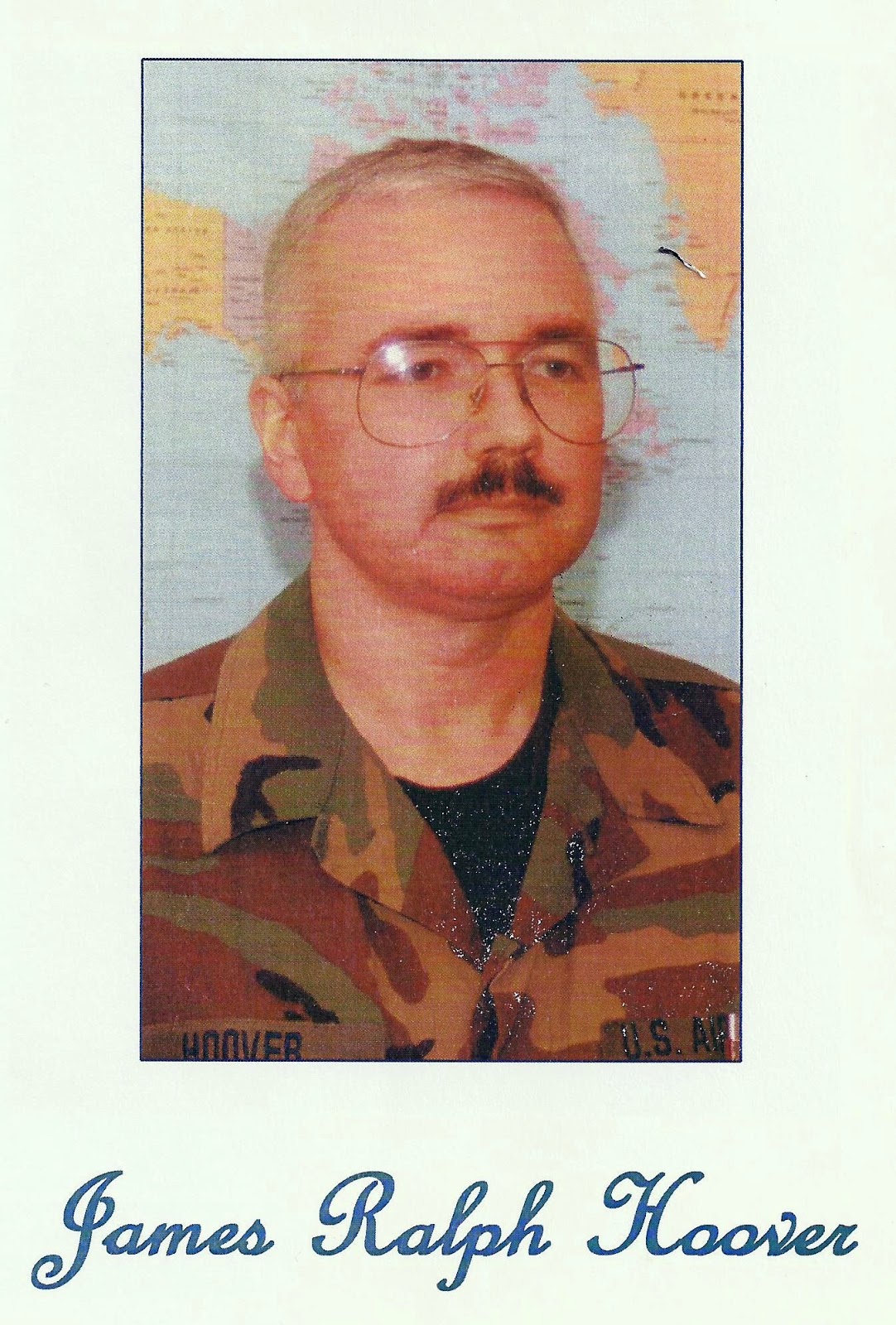