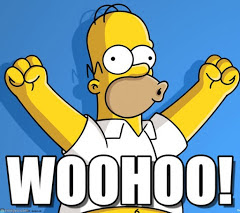 Can it be, no shorts?

Tonight I got the last of the turnouts shimmed on the south side of the layout from Winnfield to the three south turnouts in El Dorado yard.  As I added the shims to each one I kept a car handy to test the shims.  The car told me that the shims are working and are keeping the car from picking the frog points, but then came the true test......I ran the same train that I ran the other night that found three shorts. It has two KATO E8's on the point and several Trainworx 85' TOFC's with metal wheels in the consist.

Now this was just a test, so we'll see how it goes during an actual session?

Before starting on the rest of the turnouts I'm waiting for an order to arrive from MB Kleins in the next few days. The sly Mr. D. Foxx who follows the blog left me a comment asking if he could talk me into using Black styrene to shim the turnouts instead of the white? This way when I clean the tracks I won't be left with two white stripes.

On the ones that I have done now I went back with a black Sharpie.  Hopefully this will help as the guard rails are slightly below the railhead?  So now I have some sheets of 0.010" thick sheets of black styrene coming along with new blades.

The obvious things are always overlooked..... 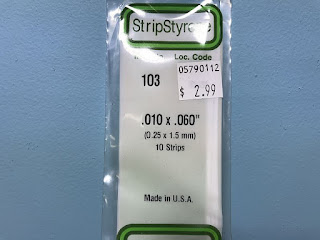 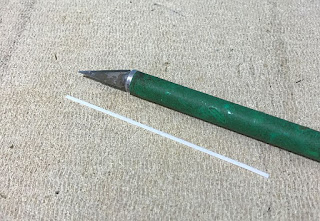 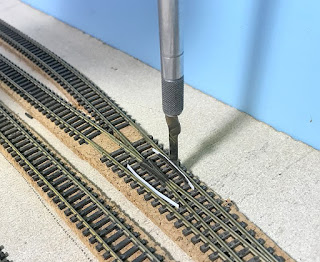 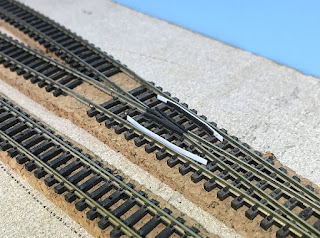 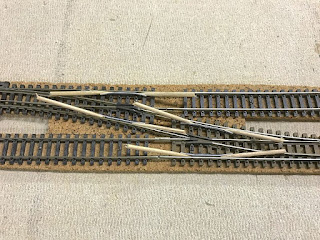 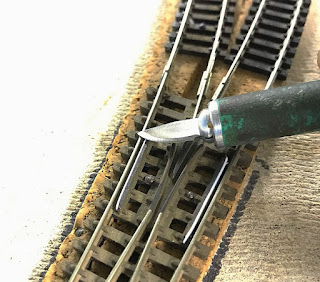 With the trackwork complete, I circled back to a recent problem I encountered after the ops we had held in February.  Just before that session I had replaced my Digitrax PM42's with DCC Specialties PSX circuit breakers.  I had always heard good things about these and gave them a try.

Well the first thing I found out with these were just how fast they were.  On only a few occasions with the PM42's did I see any shorting on the Peco turnouts.  During the February session I had shorts showing up all over the place!

Most of these occurred when a 6 axle locomotive rolled over them.  After a bit of research I found out what the problem was.  Where the frog rails converge just in front of the frog, the rails are too close together and the wheels made contact with the very tops of the railheads.  Not for very long either, but just enough that the PSX units could see it and they would shut down!  That told me just how fast the PSX circuit breakers worked cause I never seen the PM42's ever do this.

I found three fixes for this after surfing the web. 1) One fix called for filing a "V" down between the middle of the rails to create a "V"and fill it with a drop of epoxy. This basically spreads the railheads far enough apart the wheels won't touch both rails.
railwaybobsmodulebuildingtips.blogspot.com/2011/06/fixing-short-in-peco-insulfrog

2) This one calls for gluing a strip of 0.010" thick styrene to the outer edge of the plastic guard rails, thus forcing the wheels to stay closer to the rail they are riding on.  3) was to paint fingernail polish over the railheads, but this was said to be only a temporary fix as the nail polish would wear off after running trains and/or when cleaning the railheads.

Now this second fix is used more for the fact that the gauge is normally loser on the PECOs than on other brands of turnouts because they are of European design. But I read where this might also help to keep the wheels from touching both railheads?  So I figured I give them both a try.

Here's a shot of the first turnout to get the 0.010" styrene treatment on the right guard rail.  And as a bonus, it DID fix the issue that I had where one of units I was using to test the new tracks in Fordyce, the rear truck was picking the point as it went through the diverging route. 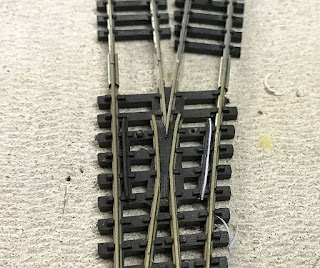 First I tried filing a "V" and filling it with epoxy.  This worked on the first turnout like a champ. However it's damn hard to get a file in place to get the groove made. Next I tried using a dremel with a small stone bit to make a dimple in both railheads and fill that with epoxy.  This also worked.

So I now have a new mission, find and fix the shorts.  But how do I do this?  Do I fix the one's I find as I find them?  Or do I just go down the line, fixing one turnout after another until I have them all done?

No matter what I do, I have to keep reminding myself of something a good friend and I always joke about when we come across issues like this.

If it hadn't of been for the fact that I had pretty much everything I needed track wise to build this layout, I might have decided to go with PECO C55 or Micro Engineering track.  Hell I might have even taken the time to learn how to hand lay my own turnouts.