Things have been moving along nicely, I got the living room finished and cleaned up several smaller nagging jobs that have been laying on the workbench, so Saturday, August 1oth will be the next session.

A couple of weeks ago Doug and I got all the tracks cleaned,  last weekend I managed to get all the locos MU'ed and readied for their respective trains.  This weekend I got another session printed from the newly automated Wheel Report.
That was soooooo cool!  [thanks Steven] 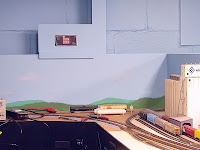 The last two things to do is stage a few more cars and then I'll work on getting the new laptop setup with JMRI installed.  This will help with monitoring the layout along with the RRampMeter.


Here's a few shots of the two yards with everything ready to roll.

The Main yard
A Clean GP38-2 heads the SB LRMPW while the LRMPH is
going to get a little help from an Eastern visitor.

Some veteran power will be assisting on the
NB MPLRW & MPLRH manifests on this run.

Big power sits on SB through staging.
Second hand E-9's are on the point of The Shrimper.
A pair of 6 axles will lugging the grain drag.
In the rear, a rainbow mix of KATY power will be pulling
their SB FPPX loads.

A nice line-up in the NB staging.
L to R; Amtak's Rebel, RI FP7's on a through freight,
a MoPac freight and a SBD Auto rack detour.

El Dorado
Ready for the day's work, everything is fueled and ready.
The drone of the idling motors fills the air as the crews
get their last cup of coffee.
A pair of leased Frisco MP15DC's will have yard duty today.

A yard full of out-bounds await their departure.

Back to the trains...

OK, enough about my boring life, let's get back to the trains.
Last Saturday night Doug came over and together we worked on some minor projects for him: Installed a TCS CN decoder in one of his locos, swapped out a couple of SD45 chassis so he could try selling them, repaired an Atlas U23B that he got of the Bay that was in sad shape, but he got it for a good price.  We were able to revive it with little to no cost so he came out OK with the deal and then reprogrammed a few of his locos.

While he was working on his projects, he also helped me get the tracks cleaned in preparation for ops session #6, one that I wanted to have back in May!  But as it goes with all things, something more important always seems to pop up.  You know what I mean, the little pesky things like wedding and remodeling, ugh!
The only thing that is left to do is re-MU all the locos [as I cleared them out back in April when a buddy was showing me how to use some of the nice features in JMRI to do maintenance during an ops session].  Then clean the wheels and we should be ready to roll!

As far as progress on the actual layout goes, nothing much has been accomplished since the last posts on the work I did at Malvern, where I started with scenery, specifically the ballast and backdrops.

There are several things that I'm really looking forward to with this upcoming session.
1) Malvern will have a little bit of scenery other than bare ceiling tile.
2) I get a chance to play with my updated and improved Wheel Report thanks to Steven Johnson [Owner of the The Rock Island: Ottawa Sands in N Scale]  Steven was gracious enough to take the time out of his busy schedule after Christmas to work with me and automate my Wheel Report.  Now with a simple push of F9 on the keyboard, the entire spreadsheet fills out all the industry needs with one push!  It is sooooo sweet!
Thanks Steven.
3) Since the last session [last October] I have added to my Rock Island diesel roster.  This means that I can retire or return some of leased power.  This a personal goal that I want to achieve.  After seeing layouts and Modular setups with locos of every road and every era, I'm looking forward to seeing an 85-95% solid roster of RI units, but that will be a ways off yet, but I'm gaining on it.

Some of the new units are:  Two ex-UP E8 A/B, two RI U30C's, one ex-DRGW GP7 and two Rock Island FP7's that were recently acquired from Steven Johnson when he recently decided to thin his herd a bit after the decision to rebuild his layout was made.  Once again Steven, Thanks!

Another thing that I want to do during this session is to take some photos so I can post them to the blog
as per request.  With the smart phone that I now have glued to my side, this should be a little easier to do.

So hopefully in a few weeks before starting on the Kitchen remodel, the trains will be rolling.