While we were working the first operating session, several of the guys were complaining that they were loosing control of their loco consists and that the throttles were showing weird displays.    Since most of the guys were not familiar with the my Digitrax system, I kind of brushed it off as a lack of knowledge until I had it happen to me. Now I am no expert when it comes to the Digitrax system as a whole, but I do know enough to make it usable.

Recently the command station had also started giving me 9 beeps at various times when I would first turn the system on.  I looked it up in the manual and it said this:
Not knowing what that meant exactly I contacted my Digitrax Guru and told him what was happening.  He proceeded to ask me the following:

He told me to unplug all the throttles, turn the system on.  When I did, the command station did not beep.  My DT400 now showed I had 10.3v.

Then he explained that the reason the command station was beeping 9 times is that there was too much of a power draw from having all the throttles plugged in at one time.  Since none of the throttles had no batteries installed, they were drawing all their power from the Loconet cable, therefore there was not enough power to run the system properly.

He explained that since I had that many UP 3&5 panels, it would be a good idea to power them with a 12v power supply.  I could have up to 9 panels powered off of one power supply.  He also told me that if I could split them into two groups of 5 and have both groups powered with their power supply, that would be even better.

He told me how to do this very easily, which was to Daisy Chain each group of 5 panels with a single wire,  which then connects back to a 12v power supply.  This provides a separate 12v circuit from which the throttles can draw from if they have no batteries installed instead of trying to draw power through the Loconet.

I did this for both groups of 5 and when I plugged the first throttle in, it showed 11.6v and as I plugged more throttles in, the voltage only dropped to around 10.7v..

My Guru explained to me that there was a small hole on the rear of each UP panels where you could solder the 12v power wire into very easily, this picture shows the location of that hole. 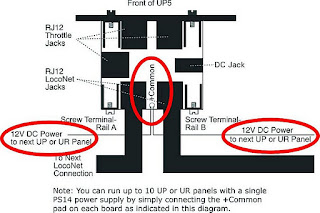 When I went to install the panel and crimp the +common lead to the power wire I had strung, it occurred to me that if I ever needed to remove the panel, that I was going to have to cut the wire, then re-crimp it upon re-installation.  So I bought some bullet connectors and made a second lead for each panel.

This picture shows the black wire that I soldered to the rear of the UP panel and the brown wire is what I crimped to the +common wire I had strung under the layout. Once everything was installed, I just pushed the bullet connectors together.  Now if I need to remove the panel I just need to pull the connectors apart.  My Guru gave me an A+ 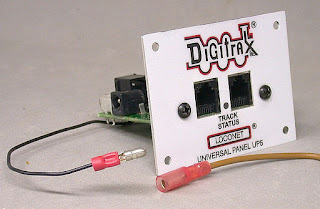 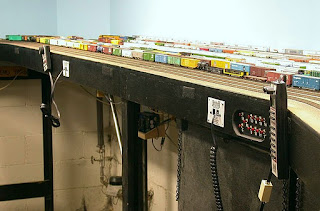