After way too many years I finally got around to pulling this project off the shelf to finish it.  N scale has always been lacking in low nosed or chopped nosed GP7's & 9's, luckily Rock Island only had two on their roster.  GP7 #1275 and GP9 #1321.  As far as I know only the 1275 made it through the Capital Rebuilding Program and came out designated as a GP9(r)  #4424 wearing the new Blue & White scheme in December of 1976.


I did some horse trading with a friend who needed some N scale locos and I need a little kitbashing done in the form of a chopped nosed GP7, the trade was agreed upon and set in motion.  I sent him his locos and all the parts he needed to complete my project:
An Atlas GP7 non dynamic shell
A Lifelike GP18 low nose shell
An Atlas GP7/9 analog chassis
A Digitrax DZ120 chip.
About a year later I received my chopped nose GP7, but was bummed to realize that with the modifications he was unable to give the unit any headlights which meant it would be regulated to a trailing unit only.  So there it sat.... for years.

A few weeks ago while I was rummaging around looking for something to work on, I grabbed the box that held these parts and opened it up to take another look at it and contemplate whether or not I should get started on it?

I took it to the bench to inspect the chassis again for a possible replacement of the old DZ120 with newer DZ126T.  As it happened, I had a newer DCC ready Atlas GP7/9 chassis sitting on the bench in the process of being cleaned and lubed when the light bulb went on!  The GP18 low nosed shell fit the newer chassis with only a tad bit grinding needed on the end to match the slope of the nose, and the "drop-in" DN163A4 with its surface mounted LED's fit with more than enough room.  So the unit would now have headlights!

With the hard work done for me, I got started adding a few detail parts and then painted it.  I used TruColor paints, Micro Scale Decals and Pan Pastels for weathering.  The grills and fans were darkened with P3 Armor Wash. 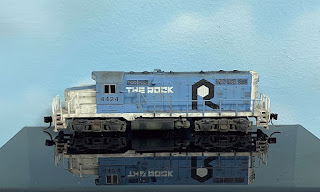 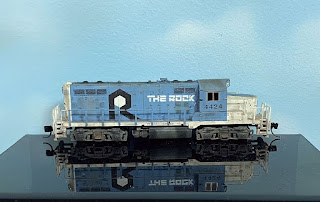 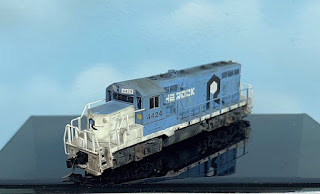 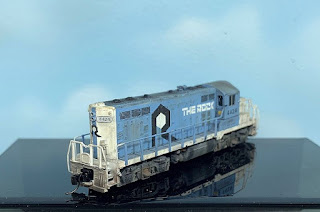