Well almost new.
After tearing down the shelves and moving them all under the layout, a friend told me of a good way to get the floor looking better.

When I first moved in here one of the first things I did was to gut the basement and tear up the tile on the floor that was curling and chipping from age and minor water damage.  Once I had it up I seen that it had been stuck down with that gooey black mastic!  The only way to get rid of it was to dissolve it.  Since I had a Gas furnace and water heater at the time, that wouldn't be an option so I elected to try and paint over it at the time.

It held up pretty well over the years but with some more minor water leaks [which I have since repaired] and the combination of the mastic the paint started to peel and lift off leaving the floor looking like some sort of disease viewed through a microscope!  I had thought about getting some stair tread runners from Menards and cutting to fit so that it would cover up the portion of the floor that was not hidden by the skirting but just never got around to it.

The idea that my friend gave me was to scrape then mop the floor to remove the worst of it and then once it was cleaned he would come in and lay down a skim coat of  Thin Set.  It's what's used to level and prep a floor where ceramic tile will be laid.  It's similar to concrete but has an adhesive property to it as well.

After he got the first coat down it took about 6 hours to dry before I could paint it.  Wow! What a difference it's made.

Here are some before and after pics. 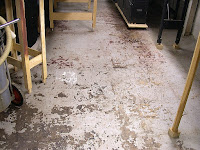 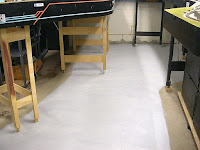 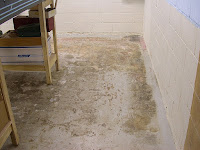 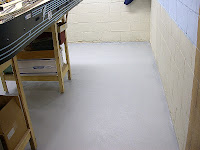 It has actually brightened up the area!

Now the trick will be to keep it clean.

While I have the brushes and rollers out, the next batch of painting will be the walls!  They are beginning to show their age as well.