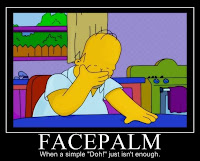 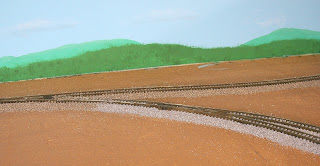 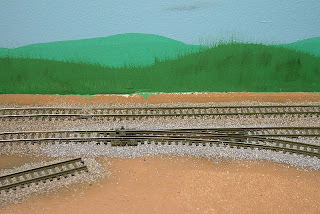 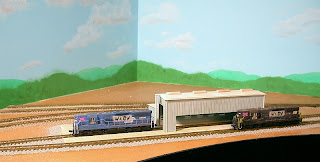 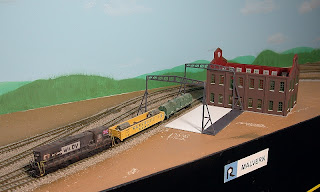 The ballast work is just about complete in Malvern.  But before I can finish it though, I need to get some foundations installed for some of the buildings.  The first one installed was for the tank car loading platform at the Olin Corp plant. 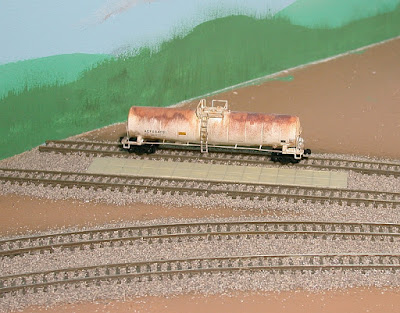 The second one is the pad for the W&OV's engine facility. 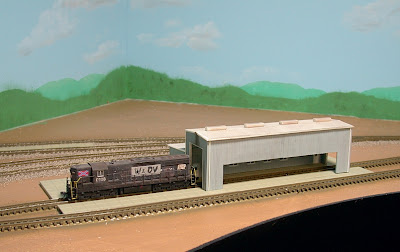 I contemplated pouring the foundations at both locations, but decided against this method because I remembered from years ago that when it came time to clean the rails, one slip and the off comes the paint or you dig into the plaster.

So this time I used styrene for the concrete.  I glued some strips of .080" styrene to the bottom side which will keep the pad surface about .020" below the railhead. So with a little care I should be able to clean the railhead without removing the painted surface.  Although accidents will happen.....

The last pad I have to install will be one for the unloading area at Heavy Metal, Inc. then I can finish with the ballasting work in Malvern.

At the same time I'm also trying to decide on a color of ballast for the W&OV engine house and the tracks that lead into Malvern from Haskell.

Since these tracks are relatively new [according to my re-written history] my hopes are to make the ballast look fresher at the W&OV facility as well as the tracks leading into Malvern since they were recently re-worked at the junction and newly laid at the engine facility.