Redesign of the main yard

Before I get into the explanation of the yard modifications, allow me to give brief history of it first. When the yard was built it was designed for the use with our Bend Track modules.  We wanted someplace where we could build and tear down the trains other than on the mainlines.  Nobody wanted a dedicated set of modules that took up half the setup. Since Bend Track does not have an operating pit like Ntrak can have, we decided to create an operating pit.

The yard was built in a shape of an "L".  It started out 4' wide at the head end, then the long leg was 8' long by 16" wide, enough to hold 9 tracks.  By the next show we added another 16" x 8' section that doubled the length. We found this to be long enough, but it was no fun trying to back a train in or out of the yard.
The next expansion was to widen the tail end of the yard to 36" and make the 8 tracks doubled ended with a loop that returned on the ninth track.  The third expansion was a short 6 track yard that attached to the back side where shorter trains could be stored and built.  On the fourth and final expansion, the little yard was replaced with two sections that was 12" wide x 8' long.  Now we had two sub yards with eight tracks each.  Included were two By-pass tracks that ran down between the two sub yards on the front two sections of the benchwork, one of which served as a reverse loop section.  This was needed as the head end of the yard all came together into one track that turned the whole yard into a big loop with 18 sidings.  The nice thing was a train could then enter onto the modules via a wye in either direction, then stay on the inner mainline or could cross over to the outer mainline.

This configuration also worked for the layout as well but after the first real operating session, one of the members who played the Yardmaster came up with a better idea that would take away the need for a reverse loop section all together.  The idea essentially separated the single yard into two inline yards that folded back on themselves.  Then the single yard throat was replaced with two throats.  The last addition that needed to be made to complete the plan was a crossover from the left rear yard ladder to Rear By-pass track.
All of the modifications can be seen in this picture in orange.

This now made for a run through yard and became an extension of the layout. With a run through yard the reverse loop [in red] was no longer needed but I decided to keep it intact electrically for times when and if we needed to turn a train.
Everything went well until I tried to power things up.  Long story short, I had to completely re-wire the entire yard.  The yard was wired for common rail since we built it before we made the jump to DCC and all the rails were wired alike.  The Red wire to the front rail and the Black wire to the rear rail on ALL of the tracks.

So, since I had this job ahead of me I decided to it right.  I used a Digitrax PM42 to break the yard into three blocks.  The front yard was on one circuit breaker, the rear yard and the engine facility on a second.  Then I set the PM42 so that I had an auto reverser for the reverse loop section which was also protected by a third circuit breaker.

In doing this, I did a lot a reading and research on this kind of a setup.  I was told by a friend that this could be done very easily with the use of a PM42.  But 2/3 of what I read on the net made it sound like it would not work or would not work very reliable.  Well, so far so good.  It works like I was told it would.  This is the first time that I have ever used an auto reverser.  Let me tell you, it is soooooo nice not to have to make sure that the switches are lined up just so.  The first loco that I ran through the crossovers just putted right along without any sign of hesitation.  The only sound I heard was the PM42 when the reverser clicked to reverse the polarity.

So, after three loooooooong weeks of modifications, this is how it turned out. 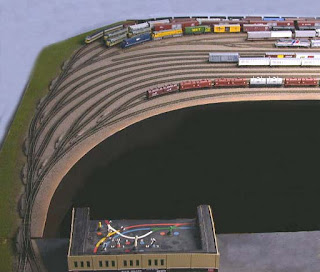 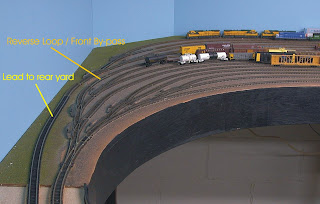 This is the new crossover that will allow trains that leave the front fiddle yard to by-pass the rear staging yard making use of the rear ladder track and to enter the layout at Haskell, AR as a southbound. 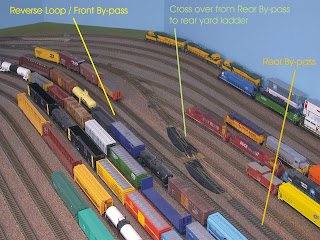 The engine facility hasn't changed much other than I re-laid the fuel and ready tracks in the foreground.
The Front by-pass becomes the Rear by-pass before it runs behind the engine house. Then it runs on the far side of the caboose track.
There are two sets of Left Hand crossovers that connect the rear by-pass with the front by-pass that creates the reverse loop ability.  The first set is just out of the picture to the left. 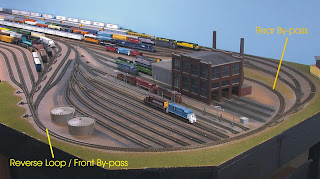 This gives a good idea of what the yard looks like.  The yard is 16' long and 28" wide in the middle.  There are a total of 18 yard tracks [Both the fiddle yard and the staging yard have 8 tracks each].  Then the Front and Rear by-pass tracks that run between the two yards.

While this in not a Prototypically designed yard, I think it will serve the purpose quite well.