This session was moved up one week due to scheduling issues, a couple of crews were not able to make it due to moving it, which I apologize for.

Several new things happened with this session.  The first thing was fully making use of the new simplified operating scheme, running with a small crew, reduced top speed of the consists and a few guest operators.

This one train starts in the staging yard and the train by itself.  The power attaches the caboose to its own train before entering the layout.  This also allows time for the W&OV switcher in Malvern to get the outbound cars gathered up and set out on the interchange track in Haskell for #773.

Once #773 reaches Alexandria, the crew uses its power to shuffles the caboose to the cars waiting to go north and also attaches any cars that #773 picked up south of El Dorado that need to go back north.  These trains only work trailing point turnouts so no run around maneuvers are needed.

Not making any Run Around moves has created an interesting operation.  If the SB #773 picks up a white tabbed car that needs to go North, it will pick up that car and drag it south to El Dorado and leave it on one of the A/D tracks for the NB #774 to grab on it's way north.  Any NB White tabbed cars that are picked up south of El Dorado will get drug clear to Alexandria and then be placed on the string of cars waiting to go north on #774.

Train #774 will do the same thing, but in reverse.  Any SB cars that it leaves in El Dorado will be left there for #773 for the next session.

In time I may schedule two freight trains to run opposite of #773 & #774 (if we have time and extra crews).  If this pans out, then these two trains can and will probably pick up any cars that trains #773 & #774 leaves in El Dorado, thus keeping the length of the locals at a smaller, more manageable length.

As mentioned we only had three crew who were able to make it this time.  Two of us worked the Winnfield local while the third worked Malvern, El Dorado and the ICG interchange.  Even with just three, everything got done and there was even time for the third crew to get his jobs done and kick back and take a nap.

Although we ran out of time as one crew needed to leave, we could have ran the session within the 2-1/2 to 3 hour time frame. Later it was discussed that I should reduce the amount of cars and industries worked during the session.

Snipped from the email from Joe the next day:
I think the suggestion of turning down the number of cars/industries switched would definitely address the only issues we saw. As it was, it was fun getting to switch so many customers and experience so much of the layout for my first time, and the trains didn't look too long for your layout, but I did feel like we needed to kind of rush to get everything done. If you knocked the number of industries touched per session to maybe 50-60% of what we did yesterday, I think that would give just the right pace, keep the train length reasonable, and let the crew get down and back in just about the right amount of time. It'd probably also offer more operating variety, since some of the smaller industries wouldn't be switched in every session.

The other thing I did was that I reduced the top speed of the locos by lowering the speed curve via the speed table.

I went from this: 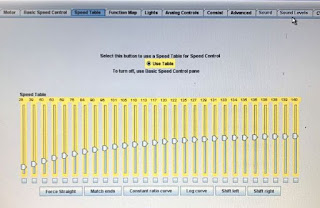 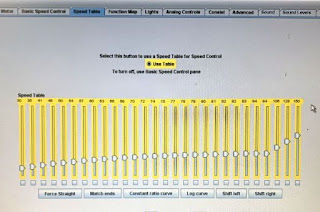 This kept the top speed down, and made the throttle feel a little more sluggish.  It also prevented any lurching if the knob was spun to far too fast.  This effectively reduced the top speed from 68 down to 35, but as you can see I increased the values of the last four steps much higher, did this so when I clean the wheels they can spin faster. I can warm the locos up quicker or if I get lazy, I can get the locos somewhere faster. So far I'm liking this.

Another thing I may do is to keep two to three locos consisted in the same set.  For a change of pace, I can then swap out the entire consists for a variety instead of individual locos?  This would make matching the speeds a little easier?  I might even try using the advanced consisting method as well?  Although this will require some sort of a ledger sheet so I can keep track of what locos are in each consist and the details of each loco.  Something to ponder...

As mentioned above, we had three crews this time, Quin, myself and Joe Atkinson.
Joe is the CEO of his HO scale Iowa Interstate layout.  It portrays the West End of the IAIS from Atlantic, IA to Council Bluffs, IA. set in May of 2005.
For those of you who have not seen his layout,
This is his site:
http://www.iaisrailfans.org/gallery/Sub4WestEnd
Here's a link to a fellow blogger who captured a lot of nice photos during one of his visits to Joe's layout:
http://michiganinterstatemodelrr.blogspot.com/2015/03/joe-atkinson-iais-4th-sub-tour.html

Joe takes pride in modeling this section of the line as prototypically as possible.  It's a beautiful layout.

Now for a few pictures. 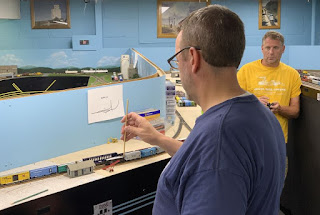 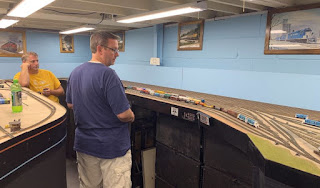 After entering the yard at Alexandria, they start adding the
NB cars from #773 to #774's train. 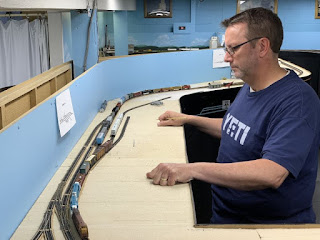 Working the NB #774 at DuBach, Joe waits patiently
while Quin eases the cut onto the Muddy Creek Mill spur.

We had my mother over for a Sunday visit and since we didn't have time to complete the session on Saturday, I had her give me a hand wrapping things up.
Joe and Quin  tied the NB #774 down in El Dorado, so Mother and I finished the run north working the towns of Fordyce and Haskell, then tied down in Little Rock.  After that we moved over to Malvern and pulled the cars left on the interchange track by #774 and spotted them at the industries in Malvern using the W&OV switcher.   Mom did a great job! 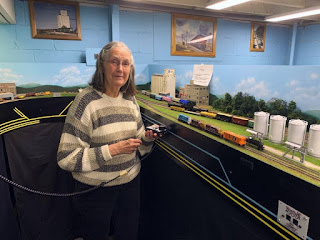 Finishing up the work at Gavilon with the #774. 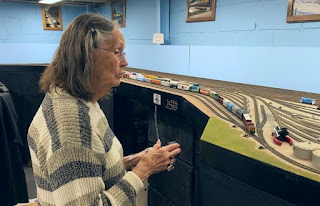 Preparing to tie down the NB #774 at Little Rock. 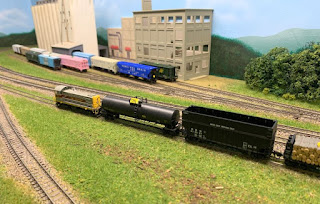 Pulling the cars off the interchange track at Haskell. 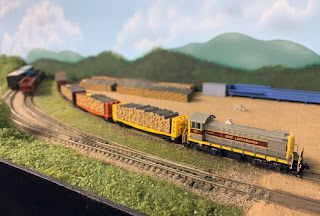 Was lucky enough to catch the Big Boy today!
We found a spot just East of North Bend, NE  at milepost 48.25

What treat it was to see such an iconic locomotive, something that I never thought I'd ever see running under its own power in my lifetime.

This afternoon I caught the SB Winnfield local picking up a few bad orders that train #35 left on a siding in Haskell, AR. the previous night. 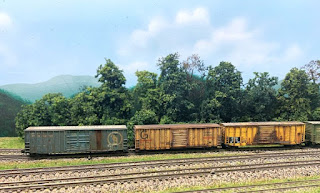 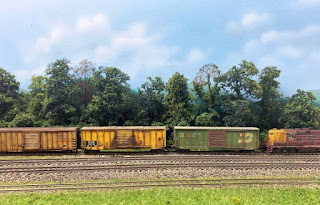 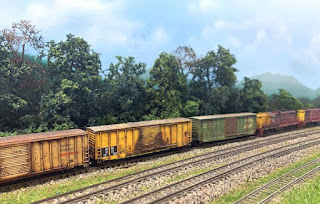 I finally got a chance to play around with some SuperTrees. 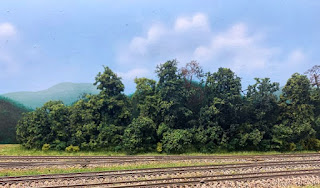 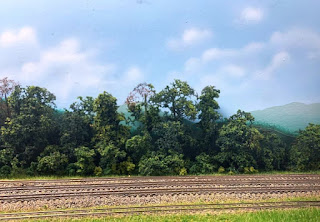 After getting the grout for the parking lot and ground foam base down at  Gavilon I applied a layer of static grass.  Things are really greening up there now, which shouldn't surprise me as it's a fertilizer distributor? 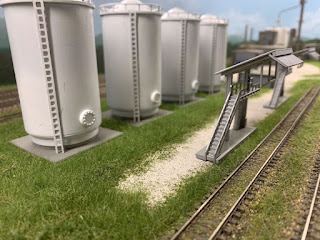 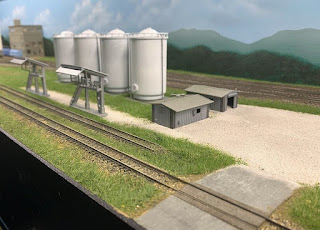 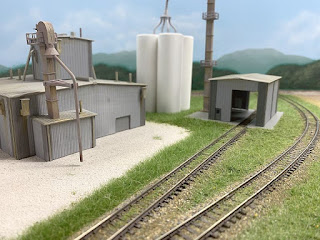 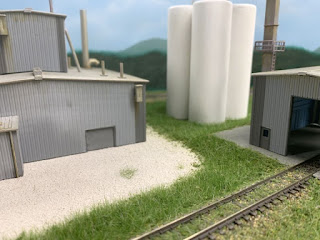