Well it's been awhile since I've updated the blog, not to mention work on the layout.  Mainly because I've suffered through some personal setbacks throughout 2020 and the first part of 2021.  The BS Pandemic, the way politics have disrupted our lives as well as the way society has suffered and declined for the last year and a half.  It's kind of taken the wind out of my sails.  But I hope forcing myself to work on the layout will keep my mind occupied.

The last major work done to the layout was the rebuilding of the yard.  As of now the trackwork is all done with the exception of what I'll call the industrial section, that is the area down the middle of the yard, which at this point is still just brown paint.  I did get all of the front yard tracks ballasted and added dirt (earth colored ground foam mixed with unsanded grout) and sprinkled through the yard in random patches.

Once that was done I added a variety of basic ground foams around the yard to make a base for static grass that I'll add later.  I also started adding another batch of foam, but a much thinner application between the tracks within the yard to enhance the look of low maintenance.

Since rebuilding the yard, I've pondered the idea of laying down static grass throughout the yard as well as in between the rails, but that comes with complications.  You can't just spray or spread the glue everywhere or else when you start applying the static grass it'll be stuck to EVERYTHING: ground foam, ballast, ties and rails and I feel that would be a mess to clean up not to mention I doubt it would look very good?  So all this has been on my mind over the summer.

In the meantime I also wanted to see about making my own static grass and weeds tufts.  I've watched a bunch of videos and I even gave it a half assed try a while back.  Now I've laid down static grass on the layout before, so I've got the basic concepts of how things work, but I stumbled across a couple of videos that shows how to make them yourself pretty easily (and yes I've had the unfortunate pleasure to waste 20 minutes of my life that I'll never get back after watching an episode of "What's Neat" to learn how NOT to make tufts).

Seeing how a Static Flock Box seems to work rather slick in the production of tufts, I looked into buying one until a friend told me that I already had one.  Really?  He explained that by clipping a wire to the inside of my Static King for one side and the other side to a metal plate, I had, in all essence a Flock Box.  While there's a bit more to it than that, it did seem to work OK, but not as well as I seen on some of the videos.

One issue I had was the wax paper or parchment paper.  No matter what I tried, when the glue dried it stuck to the paper, I even tried it on heavy duty tinfoil.  It stuck so bad it tore the paper and foil.  I even tried using some peel and stick label backing that I got from work and applied the glue to the shiny side of the backing......still it would not release easily!  Yes, I used Elmer's White glue as well flat Modge Podge, both full strength and slightly diluted.  So I got disgruntled and sat everything aside and went back upstairs away from the layout for a while.

Jump ahead a few months, the other night I was watching a few videos again, but this time one guy mentioned having the same issues that I had with glue sticking to the paper.  He showed how he used some nonstick baking pans, applied the glue directly to that and then used his applicator to apply the grass to the glue on the sheets.  A few hours later, he just simply plucked them off with a tweezers!

Really?  That seems too easy, but it made sense....Non Stick.  But it can be that easy?  So I decided why the hell not, what else do I have to lose?  I jumped on Amazon and found some cheap small 9" x 7" pans for $14 for a set of 4.  I figured with four smaller pans I could make four batches of tufts in different colors so why the hell not? Sounded logical to me.

While all this was going on, I was chatting with some friends again about how to apply the grass between the rails without the mess.  One mentioned about dabbing glue between the ties with a small brush.  Oh hell no!  I couldn't even begin to see myself painting individual ties random colors, there was no way I was going to dab glue between ties.  But that did jog my memory to where I seen a guy make his own tufts and then he glued them between the ties?  Yeah I know, which is the less of the two evil here?

I did a little snooping on one of the forums and sure enough, I ran across it.  What this modeler did was to use sheets of premade static grass and slice them into short narrow strips, just big enough to fit between the ties and rails and then glued them in place.  Since he had the area already ballasted, he dug out a number of sections of ballast between the ties and then filled them back in with the short strips of static grass strips.

OK, this is not much fast than dabbing the glue between the ties, but at least you won't be cleaning up static grass off the ties and rails for the rest of eternity.

So with all this fresh knowledge soaking in, I decided get after it.  Besides, what a better way to forget what's happening in the world today.

I've used Woodland Scenics Grass flock, didn't like.  I then switched to Silflor static grass and it looked and worked much better.  Recently I started using Woodland Scenics newer static grass, this comes in the 42g bags.  It comes in 4 colors; Dark Green, Medium Green, Light Green and Straw.  It also comes in 4 lengths of each color: 2mm, 4mm, 7mm and 12mm.

You can find it on their site under their  Field System.

I picked up all four colors in all sizes except the 12mm.  For the tufts, I chose to use the 2mm & 4mm since I wanted short grass and also wanted the trains to be able roll over it.

I also have their Static King grass applicator.  Which so far, has worked very well for my needs with only one slight modification that I'll describe later in this post.

For the most part, this is the stage that my yard is in, ballast and dirt with a base of ground foam on the outer edges of the yard. 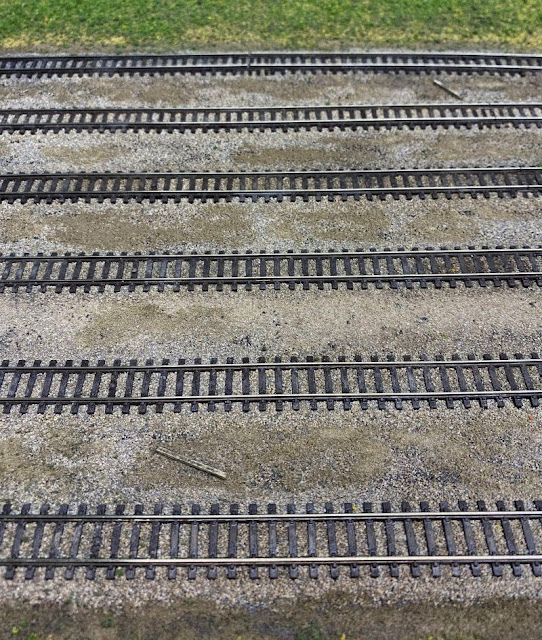 Using a cheap 1" foam brush and diluted Modge Podge (3 parts glue, 1 part water), I dabbed it carefully between the tracks on areas where there was the dirt made from foam and grout.  Then I lightly sprinkled several different colors of fine ground foam and a few small chunks of courser foam and padded it into the glue with my fingers and let it dry.  Actually, this by itself looks pretty good, but why not push the envelope? 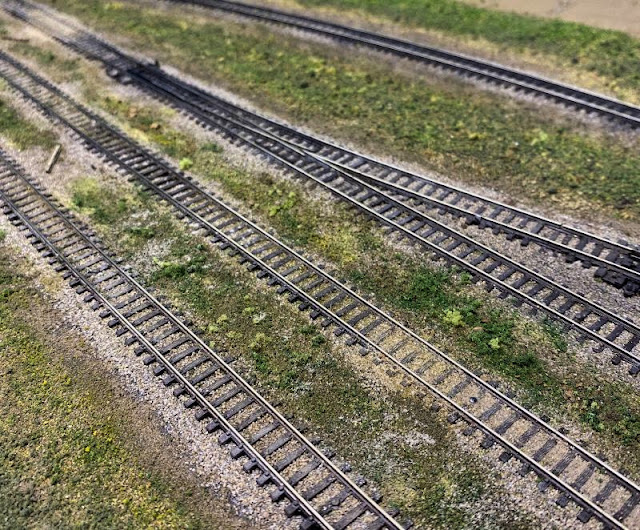 While the ground foam was drying, I got things set up to make the tufts. I mixed a pinch of Dark Green 2mm and a pinch of Light Green 2mm into the hopper to start with and shook it up to mix it together.

(This image shows a similar mix of 4mm) 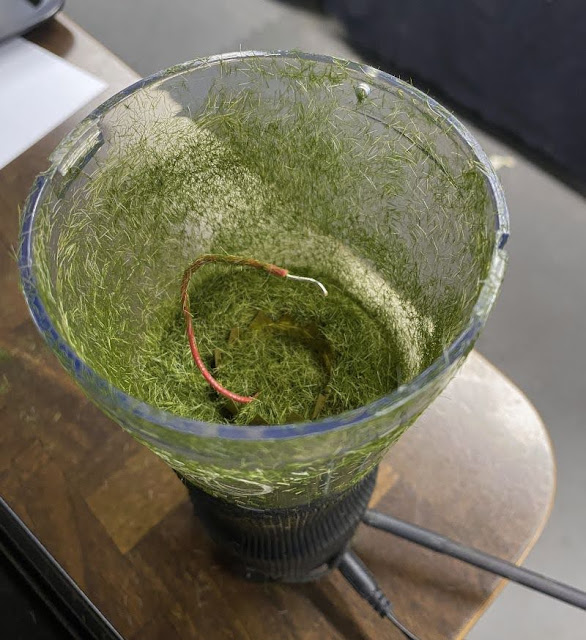 I next applied several lines and dots of full strength glue (I used flat Modge Podge) onto the small cookie pans. 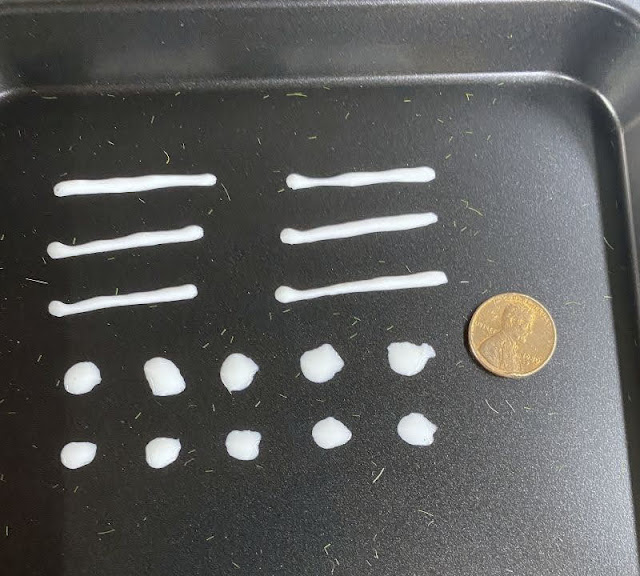 I clipped one of the wires of the applicator to the pan, turned it on and started shaking the grass on the pan making sure they were covered thoroughly.  Sure enough, they stood up tall and proud just like I was told they would.  You definitely don't want to use thin glue or else it would suck the fibers right down into the glue.  You want the fibers on top of the glue.

Once I was happy, I took the clip off and shook the excess into a collection pan so I could reuse it again.  As you can see, the pans do a good job of attracting the fibers (unlike someone did in his video using the water sprayed onto wax paper, LOL) 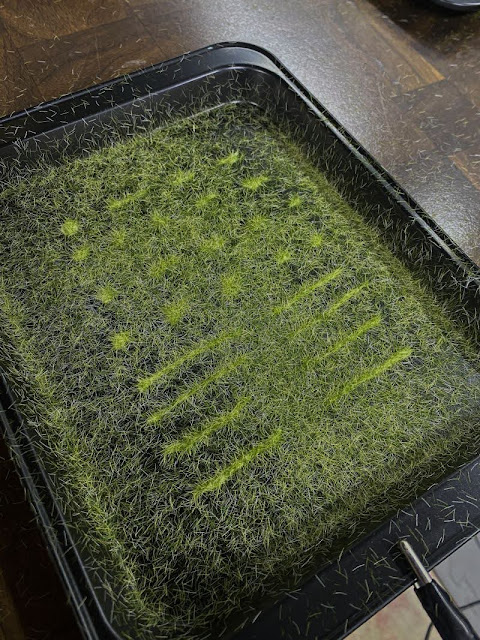 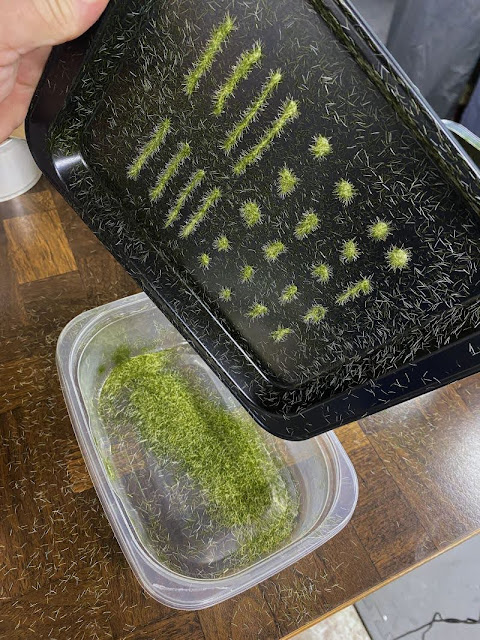 This just shows how much grass did not come out of the hopper. Since I had several trays ready with glue, I dumped what I had collected in the plastic container back into the hopper and moved to the next tray, then repeated the process.

Also, I'm assuming the plastic hopper retains some static as a lot of fibers remained in the hopper.  Once the applicator is turned off and discharged, you can use your finger or a paint brush to rake the remain fibers out so you can change color or size. 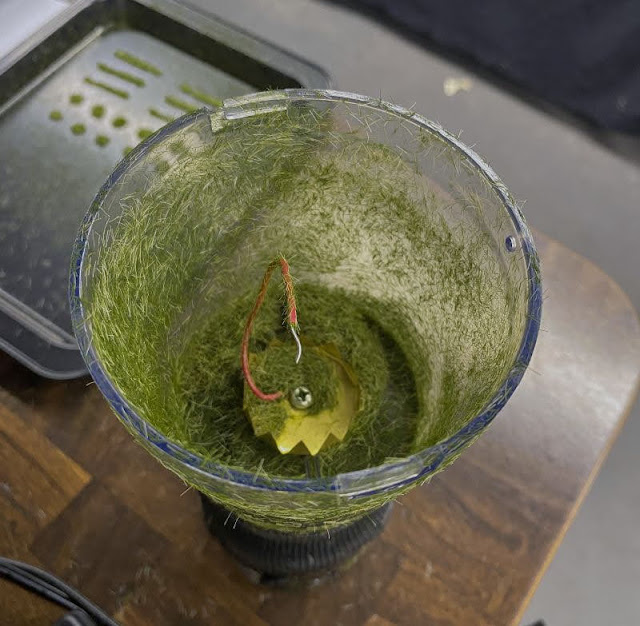 Here are the four trays ready to set aside to dry.  Once I get the tufts and strips plucked off, I'll gather the excess grass back into the plastic tray to use later.  It's probably hard to tell, but the top two are made up of 2mm grass: Dark Green and Light Green.  The bottom two are made of 2mm Dark Green and 4mm Straw. 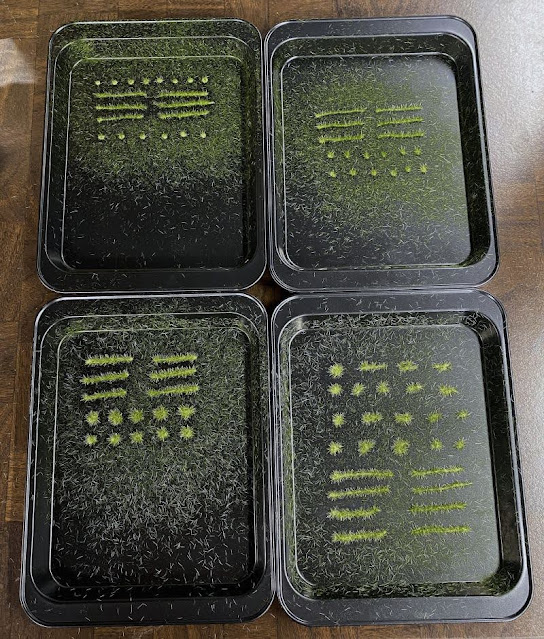 Using some strips I made earlier, I randomly cut them to length to fit between the ties and between the rails. The round tufts I used on the outside of the rails.  Now these are not glued in place yet as I just laid them down to get an idea of how they'll look.  Once I get a good amount a tufts in different colors and sizes, I'll dab them in glue and stick them in place. 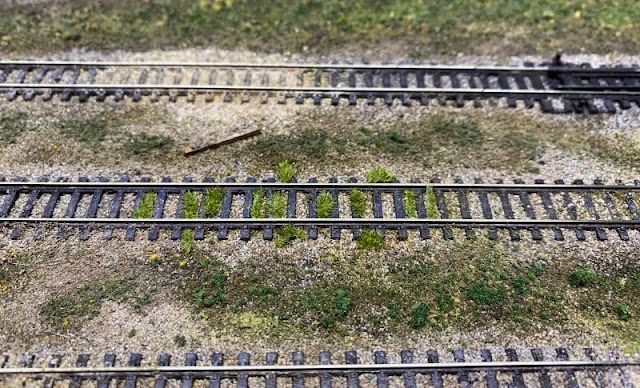 Since this is N scale and I want the grass between the rails, 7mm and bigger will just be too long. 2mm & 4mm should work just fine.  The one problem I ran into with the WS Grass King, is the screen holes are too large for the 2mm grass and it just pours through the screen.

So what I came up with, is I sacrificed an old sieve and made a disc that would fit into the plastic screen of the hopper.  The metal screen is about half the size of the plastic screen and it retains the 2mm grass much better.  It also works for the 4mm but you do have shake it a little harder to get the 4mm to filter through. 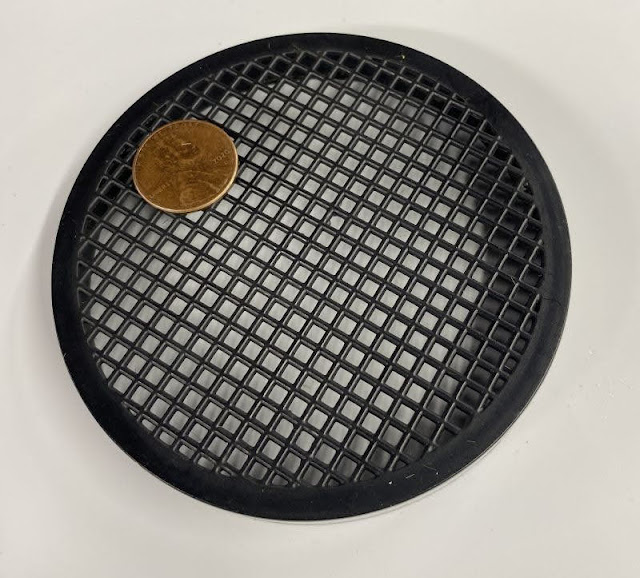 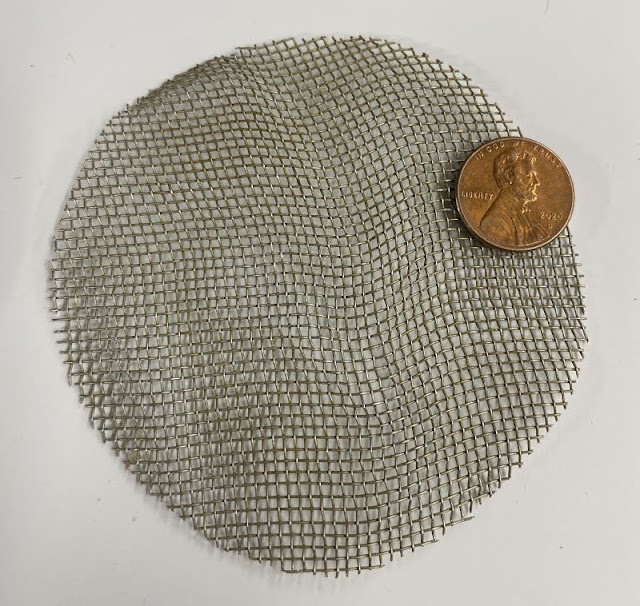 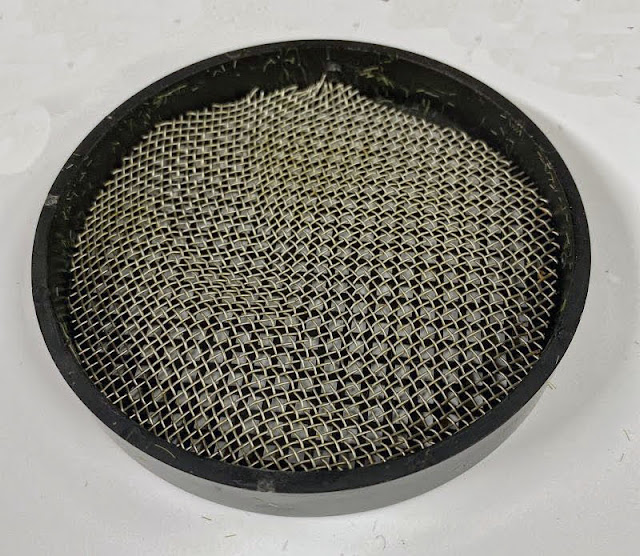 Damn that was a long post, but it's been awhile since I posted, hope you're still awake?