These two were the first of the GP18's to join the roster, but it wasn't till now that I got around to weathering them.

Again as I did with #1351 I replaced the factory LifeLike DCC ready chassis Atlas DCC ready chassis.  I only had to add a few detail parts to bring them close to the prototype.  It's tough finding good shots of Rock Island locos at times, but I did manage to find a couple that told the story. 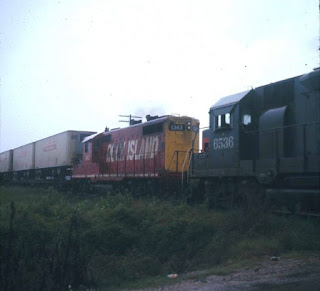 Both of these came factory painted in the 70's Red and Yellow speed lettering. The trucks and fuel tanks were also painted gray as per the prototype, but the gray waaaaay too light.

Once all the details were applied and painted to match, I sealed both units with a healthy coat of Dull Coat, I mention heavy as I was hoping that it would give more tooth when applying the Pan Pastels.  I ran into the issue of the Dull Coat dissipating the pastels on the #1351, which made me re-apply several coats of the pastels after spraying the Dull Coat.

I'm thinking it helped? I only misted a light coat of Dull Coat once, then another full strength to seal it all a short while later.  The Pastels didn't seem to dissipate much at all like it they did on the #1351.

Anyway here are the results.  I'm kind of diggin the Pan Pastels.  If you're going after a real rust bucket, I think Oils are the way to go, but for just a faded dusty look, the Pastels seem to do a good job. 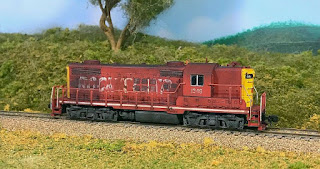 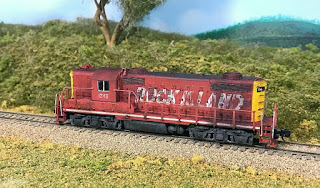 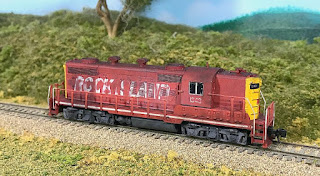 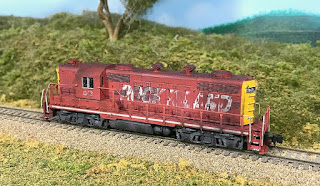 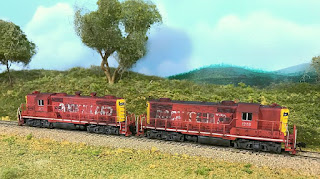 When I did the 1351, one feature I really liked was the wide, black streak under the rear grilles.  What I found out was it seemed to be a common trait on the GP18's.  So I added to the twins as well. 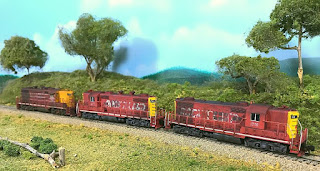 I've got two more GP18's planned so I'll see if I can get them done before the layout pulls me back to it.