Well it's been two weeks since my knee surgery and things are progressing well.

As mentioned in my last post, while I had the mill out I decided to get a few more Atlas GP chassis prepped for the rest of my GP18 fleet, 5 total.   The two Red and Yellow 18's are ready to have chips installed and programmed and I still need to get MTL couplers installed.  Then they'll at least be serviceable for the next session.

The next GP18 I worked on is one that always caught my eye. 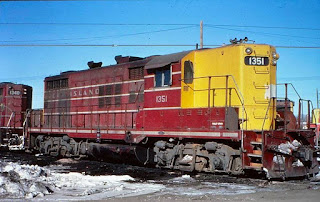 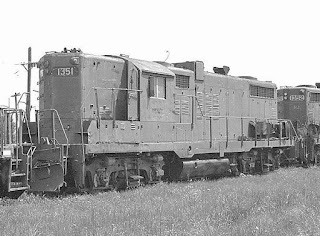 Not sure of the whole story behind this one?  It wasn't a wreck rebuild.  I read somewhere that the shops must have had some extra yellow paint laying around and needed to use it up?  Either way is it a sharp looking unit that I've been wanting to add to my fleet mainly because it adds to the Character of the Rock Island in my eyes.

I didn't need to do too much customization to this unit other than add the flared arrestors, a firecracker antenna, cab shades, new cab numbers, number boards and then I needed to fabricate the air filter on the top.

This was done with a few scraps of styrene. 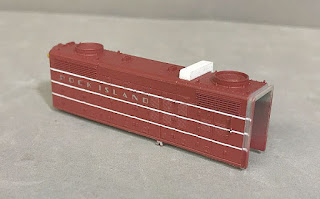 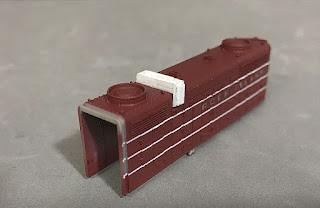 Not perfect, but it gets the idea across.

Then I added some small scraps of extruded screen to the flared arrestors. 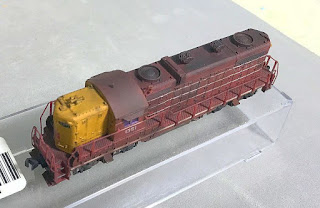 Before I painted the yellow or started on the weathering, because I was not able to remove the glazing, I used some liquid mask to cover the windows and headlights on both ends.  The last bottle I bought was dried up so I tried some Humbrol Maskol this time.  This stuff worked very well! 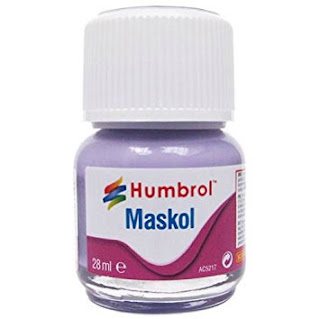 As I did on the ICG units, I used primarily Pan Pastels for the weathering medium.  I also used some P3 Armor Wash to darken the grilles and to make the dark stain under the rear intake grille.  I was able to get crisper lines with the P3.

As I was afraid of, the Pan Pastels did dissipate a little after I sprayed the first coat of Dull Coat on the unit to seal it.  I went back over the model with a bit heavier coat of Pastels then reshot the Dull Coat.  This seemed to help but I wondered if I had not gotten a thick enough or rough enough coat of the Dull Coat to help hold the Pastels in the first place?  Another thing I did was to mist several light coats on and let them dry before spraying a heavier sealer coat to protect the weathering.  It seemed to work? 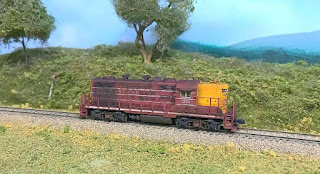 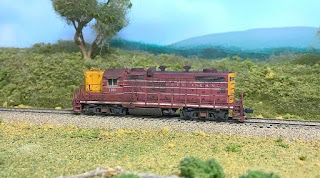 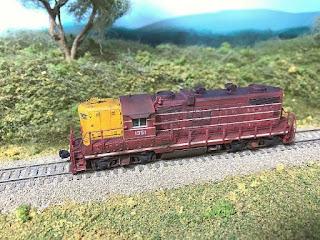 In this shot I grabbed an Intermountain F7A that was originally built by flight2000 (Brian K).  He built this F7 for a customer in Germany who later sold it on eBay and I was lucky enough to score it. 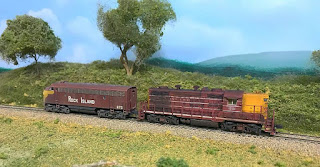 A knee, a mill and some new power

A KNEE
Back in late August I slipped on air hose at work and tore my meniscus and fractured my leg bone and I've been off work since then.  Well this gave me a lot of modeling time that I put to good use.  Most of which time I used to finish up the trackwork, held an op session and worked on the backdrop.

They finally decided to scope my knee and do the repairs on Nov 8th.  I was laid up for several days and had to stay off my leg, which about drove me stir crazy, cause I'm not one to sit down too long.  By the 12th I couldn't watch anymore TV and was jonesing to get downstairs and putter around, just to be doing something!

A MILL
Up until the surgery I knew I wouldn't be able to stand and work on the layout so I decided to switch directions and clear up some locomotive projects I've had sitting on the shelf for a long time.  At least I could do this sitting at the workbench and not be on the leg.  Hey, it was better than watching a bunch of mindless shows on Netflix.

The first project on my To-Do list was a pair of LifeLike GP18's.  Not being a fan of the LifeLike chassis's, even the Walthers Proto version with the split frame DCC versions, I had started to fit an Atlas GP7/9 frame under the LifeLike shell several years ago when I friend asked me to try a similar project with a couple of Bachmann GP7's in this post.

After getting the units out and refreshing my memory of the original plan, I drug the mill out and got it setup.  The plan had been to do some minor milling to thin the top edges of the Atlas frame since the inside of the LifeLike shell was a bit narrower at the top due the removable section where the exhaust stacks were at. 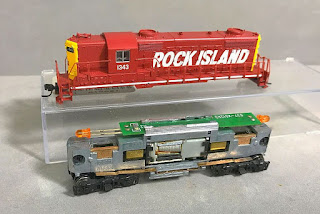 I milled a small notch down the length the outer top edge of the frames and then another pass across the side of the frame, about 3/32" down from the top.  I needed just a bit of clearance for the thickness of the shell. 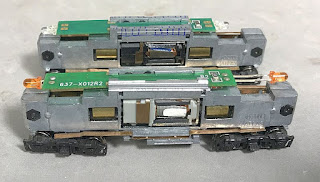 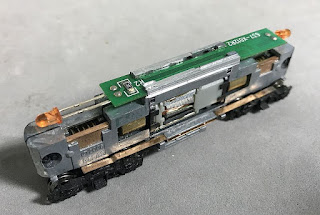 Next I used a large grinding disk in the dremel and eased the angle of the chassis so it would slip inside the front and rear of the shell. 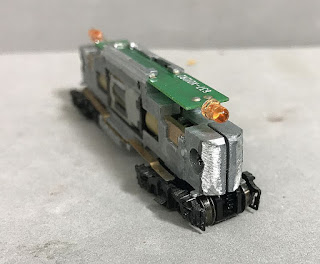 After a couple of test fittings, the chassis slipped right in and the bump-outs on the Atlas chassis, lined up with the dimple holes on the inside of the LifeLike shell.  But it was still a little snug so I flattened the bump-out with a file and Voila!  It fit like a glove and everything lined up!

Here are the first two less their fuel tanks. 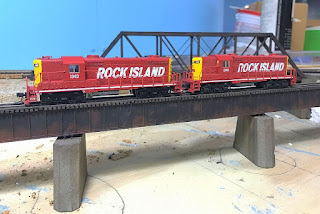 Since things were setup, I scrounged up two more Atlas chassis and repeated the process.  If I can find one more chassis I might get it milled too as I have another shell spotted.

NEW POWER
While digging out the GP18 projects I stumbled across another long ago shelved project.  A number of years ago I scored an Atlas GP35 and a GP38-2 that was painted in the ICG Orange & Gray scheme on eBay for a very good price.  These turned out to be a pretty decent paint job except that the painter had used some sort of paint that was extreeeeeeemely glossy, which might have been Scale Coat? 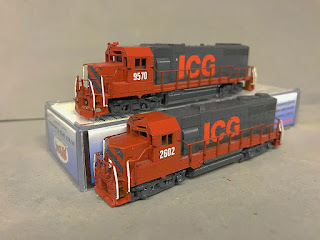 The GP38-2 already had a DCC frame and was pretty much ready to run, but the GP35 had the older DC frame that I wanted to swap out for a newer DCC ready frame.  Both units needed a few details, couplers and chips added, nothing major so I added them to the short bucket list.

The Orange and Gray scheme started showing up in the early 80's so I didn't want these units to be rustbuckets, but anyone who knows the ICG, knows that dirty locos were just part of the ICG, just as they were to the Rock Island.

A couple of quick squirts of Dull Coat cut the gloss and now I was ready to start getting them dirty.  This time I decided to use nothing but Pan Pastels and see how well they worked.  More or less I just wanted them faded and weather worn just enough to show road grime to show a little age. 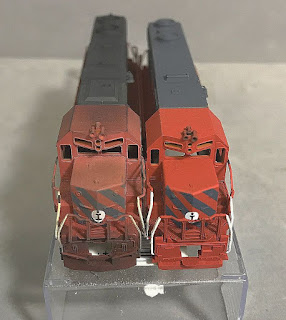 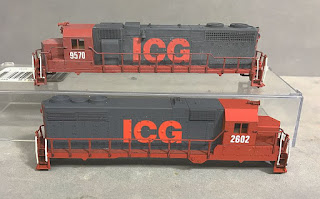 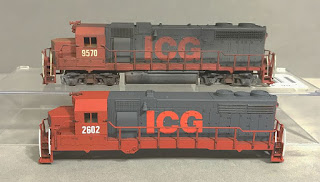 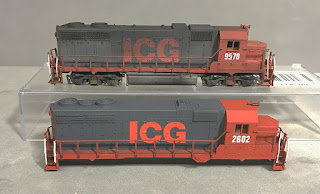 I'm waiting on some Shell Scale number board decals and need to add a few minor details, but for now they're ready for service.

Until my knee is back to normal, my plan is to get some more Bench Projects done like this.  I've been itching to get back to working on my loco fleet and I've got lots of locos to run through the paint shop.

I got a chance to paint the backdrop from where I left off at Fordyce, down to Calion, just North of the Ouachita River.

Fordyce is to the left, looking south. 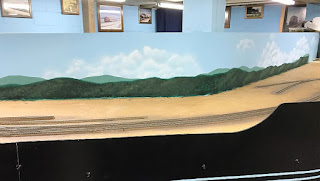 Looking north from the Ouachita River. 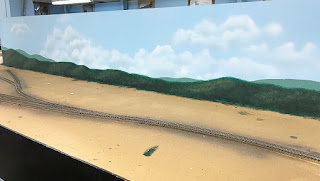 Hopefully next, I'll be working on the scene behind the Ouachita River or I'll try to get the town of El Dorado proper raised and work back to the river scene?