Several months ago Steven Johnson [owner of the Rock Island Ottawa Sands layout] started to ask about speed matching his fleet.  Knowing that I had done this with my fleet and after reading my post about it, one question he had was wondering if his Bachmann GP7's could be speed matched?

I told him I doubt it as they were kind of a basic DCC chip that Bachmann installs in their locos. After a few emails and phone calls it was decided that they should be shipped to me so I could test them on my system before he spent the money for the equipment to speed match his own fleet and find out that the Bachmann GP's couldn't be matched.

Once I got them, I took them down to the laboratory and placed them on the programming track.  I could read them fine, but was not able to adjust ANY of the CV's!  Not sure why?

So the next option was to replace the chip.  I found online with limited results of how some folks have replaced the chip using one of many hardwired chips such as the Digitrax DZ125/126 and TCS M1.  There was more than enough room to add these once the original board was removed.  I conversed with Steven about this and he didn't seem too agreeable with this option.  Another option I had that was untested, was to swap the Bachmann chassis with a either an Atlas GP7/9 DC or DCC ready chassis.

This would require only a small bit of filing, grinding or milling to get it to fit, but no major surgery. I have done this kind of swapping before between chassis and shells.  I was able to fit a LifeLike DCC ready chassis under an Atlas shell and have been contemplating trying to fit an Atlas GP7/9 DCC ready chassis under a Life Like GP18 shell, but haven't gotten it finished yet.

The first thing I tried was to shove a Life Like DC chassis under the Bachmann shell.  It fit, but was kind of loose.  Not having a Life Like DCC ready chassis handy, I assumed it would fit as well.  Then I took an old Atlas GP7/9 DC chassis and began playing with it.  The first thing I checked was to see if there was enough inside the shell for the taller Atlas chassis.  There was and I actually got it to fit, but it was very snug.  Then I pulled out a DCC ready chassis and it was extremely tight!

Three areas that need to be ground off was the four angled ends on the front and back of the chassis. These were a bit wider than the ones on the DC chassis. 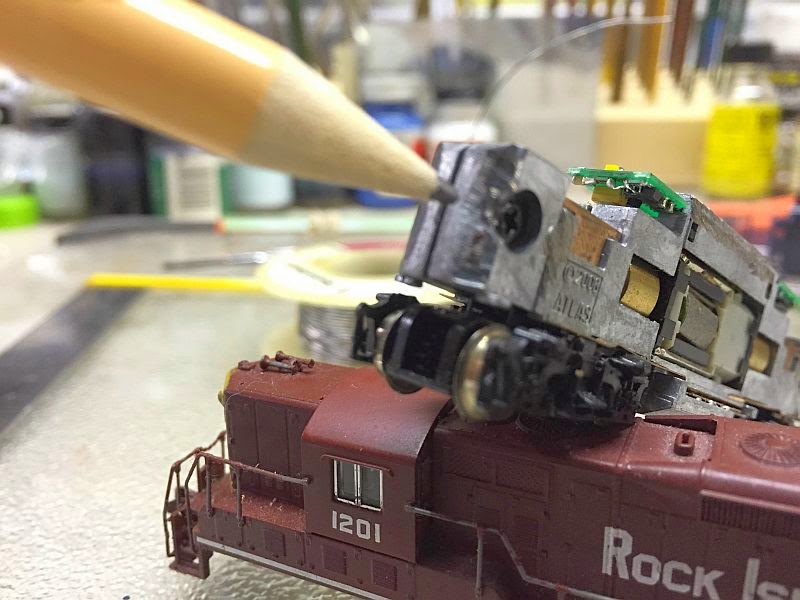 Be sure not to remove the four little bits that stick out near the bottom of the chassis, as they keep the shell from going any lower.

The second thing that needed to be ground off were the four little nubs that snap into the four little divots inside an Atlas shell.  This allowed the shell to slide on even further.

The last thing I did was to grind the top edges at an angle thinking these might be wider than the inside corner of the Bachmann shell. 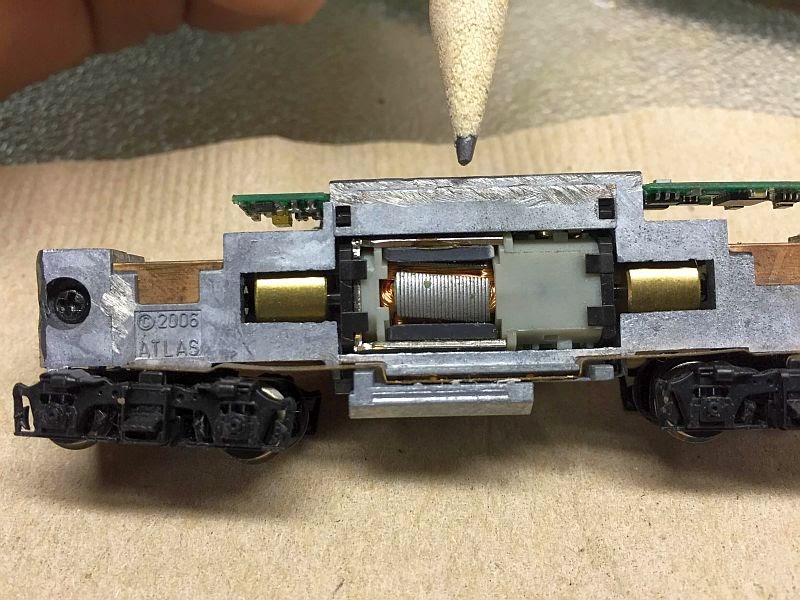 Long story short, I got them to fit, but again they were very snug.  I did file a little off each side along the top edge of the chassis, but at least they stay on and don't pop off when you pick them up.  The only thing I noticed was the if you look down the side sills, they do bulge out just a tiny bit.

After getting to fit, I next installed a Digitrax DN163A0.  Got the chip programmed with the basics and then let them run to break them in and warm them up before speed matching. At his request, I programmed them just the way I have programmed my fleet of GP7's.

I asked Steven "Why not just sell the Bachmann GP's and pick up some DCC ready Atlas GP's"?  He told me that he wanted to keep at least the shells for sentimental reasons as a friend painted them up for him.  So the chassis replacement became the best option.   After getting them Frankensteined and running, then speed matched, it was decided to give them a thorough shakedown.

So what's a good way to do this?  How about an operating session?  Since I planned a dry run with the TAB system anyway, why not assign them to a local turn?

Which is exactly what I did.  They worked flawlessly!
Here's a few pics of them in action.

Sitting on the house tracks at El Dorado awaiting assignment. 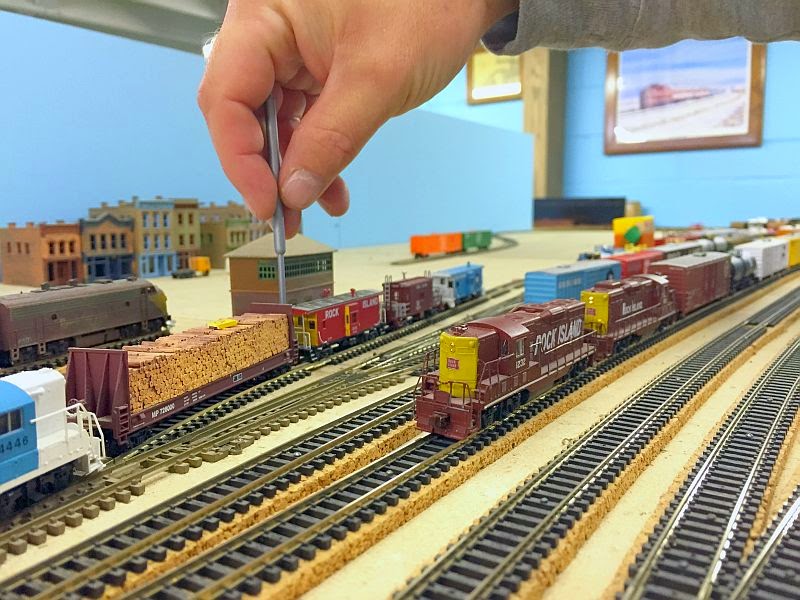 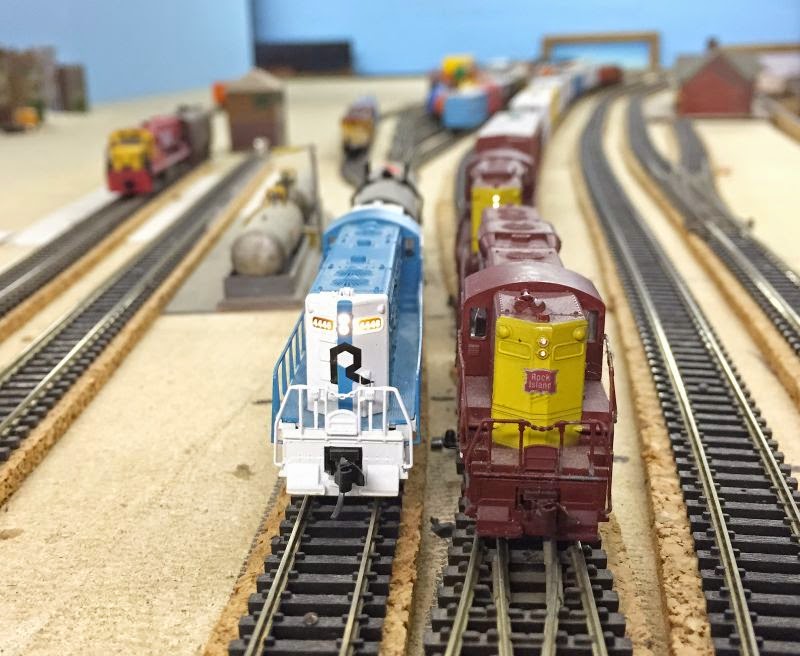 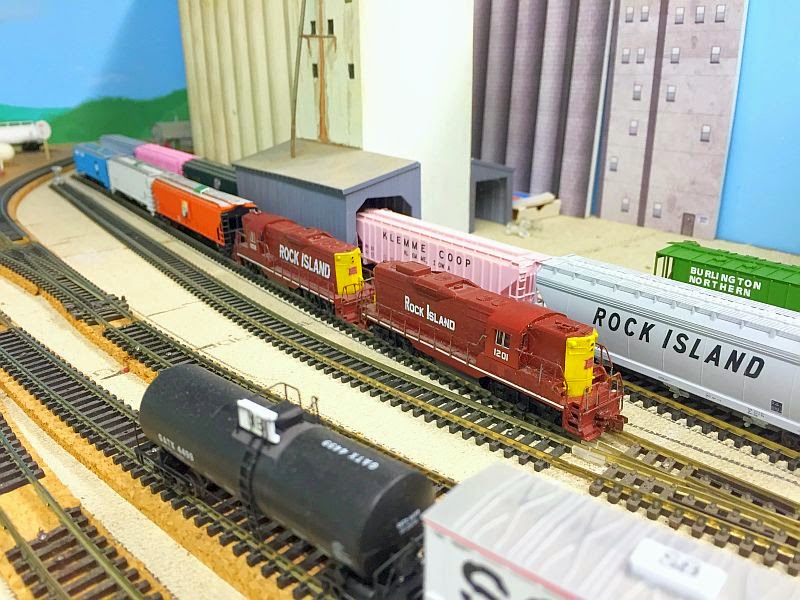 Finished with Calion lumber and tied back onto the train.