With the track work 90% completed, it was time to start laying out the sidings to see how the buildings would fit the spaces.  Instead of making mock-ups I chose to print out the footprints of the building kits on paper and lay them into place to get a feeling of area that I would need.  The tracks were just tacked into place so moving them was an easy job.

Once the buildings that had a questionable area to fit was determined,  I tacked the sidings back into place and I started dropping the feeder wires so I could get power to the rails.
I chose Digitrax for my DCC system.  This was the first time that I actually wired a layout for DCC and was looking forward to seeing just how easy it was.

I used 18ga trunk wires and 22ga feeder wires soldered to the rails.  Stringing the trunk wires was a breeze and I had them done in two nights.  The feeders took about a week or so.  I had heard of people using the SUITCASE connectors and then seen how a buddy used them on his layout.  It looked simple enough. 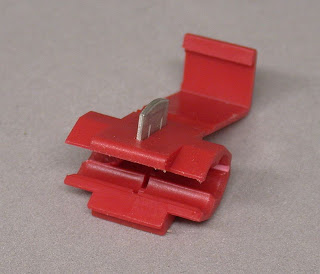 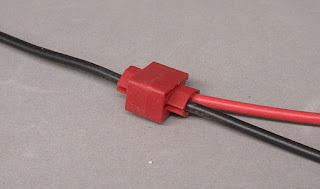 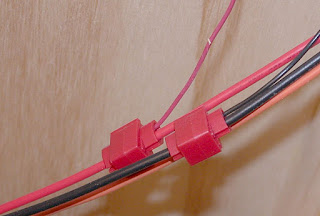 Once I had acquired enough of these connectors, I started in.  It took me three nights of about two hours each night to get them finished.  This proved to be very simple and I would recommend them to anyone.  I ordered mine from and online supply house like Mouser.com.  I found them locally at Radio Shack or the big box stores but they were about three times the price.  I think I ordered something like 400 of them for around $0.30 each.  What I didn't use I sold to some of the other members in my group.

They sell a special pair of pliers that press the metal tabs into place, but for the price of the tool, I grabbed my trusty pliers.  Yeah, I bent the tabs over on a few of them but once I got use the feeling, the rest went pretty well. 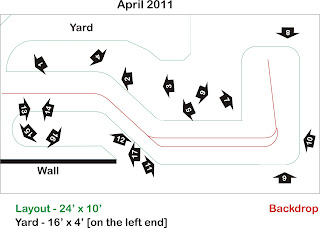 Winnfield is the southernmost terminus on the layout for the SB local.  In the foreground we see the siding for Union Scrap.  The track that the two boxcars are setting on creates the continuous loop.  On operation nights, "Stored" boxcars will be set here so as to create a block for the loop.  This will also be another job for the Winnfield local.  Every trip to town, the crew will need to swap the position of the "stored" cars and exercise the axles so they don't rust tight while they are stored here on the end of track. 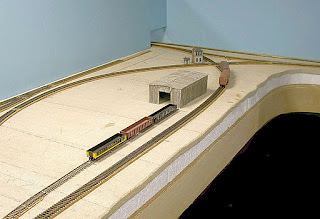 Backing up a bit we can see Tioga Jct.  This is where The Rock leaves their rails and begins to usage KCS trackage into Alexandria, LA.   To the left is the open staging for the ICG.  These two units have a short train ready to set out at Ruston, LA.  [the next town North]. 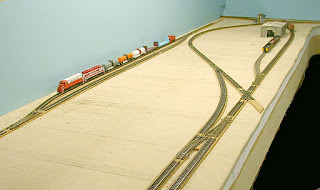 Here at Ruston, LA. we find several cars waiting to be picked up by the Winnfield local on its next run. 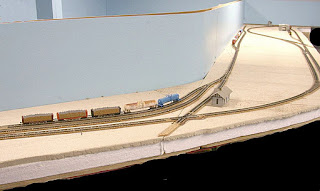 Just another view of Ruston, LA.
The silos in the distance are the plastic pellet transfer station for ARKLA Plastics  in Dubach, LA. 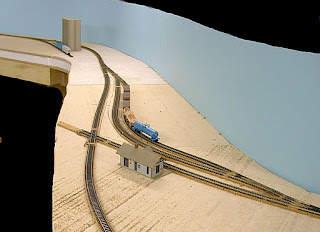 Setting on the outskirts & south end of Dubach, LA. are the silos of ARKLA Plastics. 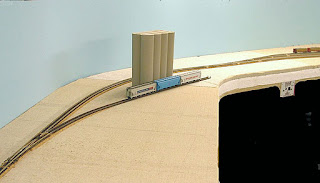 At Dubach, LA a small siding has been installed off of the main siding for the purpose of a run-around track and pocket track to store cars for pickup on the return run of the Winnfield local.
In the background we see A&A Cement Works. 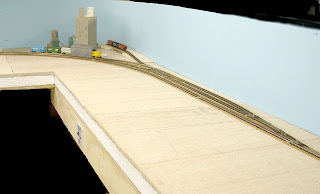 The aggregate track in the rear has been raised about 1" so they can dump the gravel into a pit for sorting.
The building that is setting in the foreground will be replaced with a Medusa Kit when it gets built.

On the north end of Dubach, LA the team tracks have been installed for the Piggly Wiggly Distribution center. 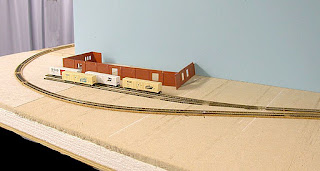 Crossing the Louisiana / Arkansas border after leaving Dubach, we swing into the town of El Dorado, AR.  Here we see the yard from the south end.  It is here that the NB and SB locals originate and terminate. 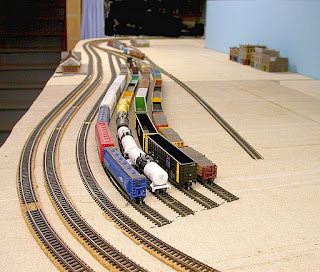 Looking south at El Dorado yard, the buildings against the backdrop is where the actual township of El Dorado will be located.  It will be raised about 2"- 3" above track level. 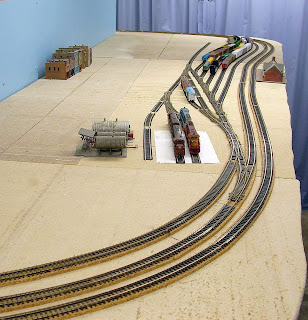 Today we find the house tracks and the caboose tracks full. 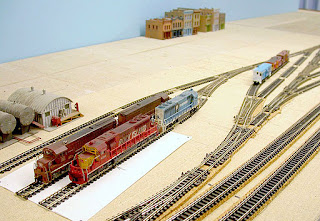 At Calion, AR.  The shed track and the house track have been laid in place.  The white paper cut outs are the footprints of the buildings.  I've used these to determine the rough location of the tracks. 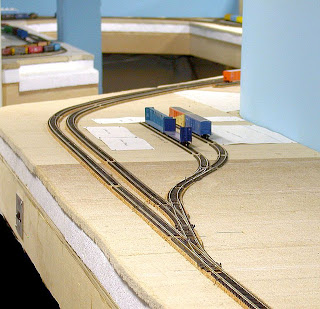 Here's another view of Calion Lumber Co.  The house track is in back.  Sheet goods and other construction products are unloaded into the building.  The yard track in front is for the unloading of dimensional lumber that will be placed in the racks of the open sheds. 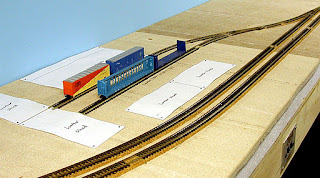 Fordyce, AR is the home of two industries: Flappers Chicken and Dixie Wood Mfg.  Flappers has three sidings, from left to right: The Hen House is the receiving track for livestock. The reefers are sitting is the packing house track and the tankers are sitting on the litter track for editable tallow.  In the foreground right, the boxcars are spotted at Dixie Woods Mfg. 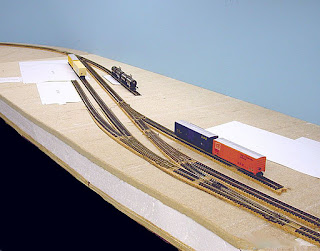 On the west edge of Haskell, AR a lone flatcar is spotted for unloading of a brand new Excavator at Mclehaney Equipment Co.  Flappers can be seen in the upper right. 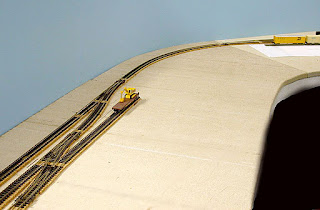 Giving the town of Haskell, AR. it's largest employer is Riceland Industries.  Here rice is brought to the elevator for shipment to the gulf for export.  Some of the rice will be processed at the mill in the foreground where the rice is de-hulled and refined.  Rice hulls are used as a pressing aid in fruit juice extraction and as bedding in poultry houses.
The tracks leading off to the left will wind up in Malvern, AR.  These tracks have been sold to the W&OV [Warren & Ouachita Valley] 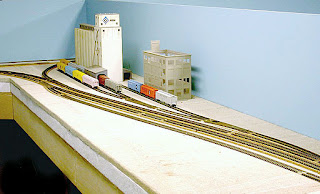 As we enter the town of Malvern, AR. we see the engine facility of the W&OV in the foreground and Olin-Chlor Alkali Products in the background. These tankers will be filled with hydrochloric acid and returned to the ICG at Ruston, LA. 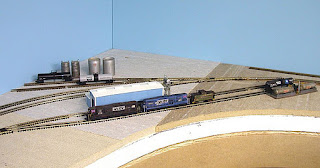 Just around the corner we see coil cars setting at Heavy Metal Mfg. ready for unloading.  Right behind Heavy Metal is the Pulpwood plant: Crushmoore Ind.  The Woodchip cars have been spotted and are ready for loading. 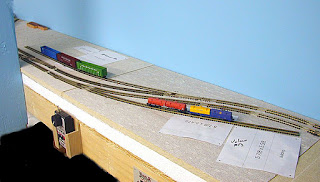 Looking from the west end of Malvern the track in the foreground leads to the next town West and to the Gritty Gravel Co.  The hoppers on the siding have been returned for a fresh load of aggregate to then be hauled to A&A Cement Works when ordered.  The next track is for the unloading of pulpwood for Crushmoore Ind.  When unloaded, they will make way back to Ruston, LA and the ICG interchange. 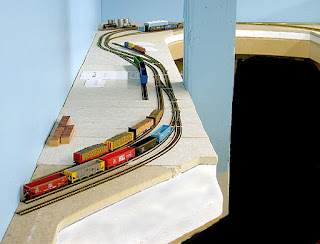 Now the next step: Make up the car routing system and get some buildings and scenery started!