Now that the deck bridge is assembled, I want to get it painted and weathered before getting the track assembled to it.  At first I wasn't sure of what color I wanted it to be: Silver, Red Oxide or black?

While scouting the net looking for examples I stumbled upon a blog where the owner was building a similar deck bridge and he also covered how he weathered it, Bingo!  It was just what I wanted.

He painted his black and then showed a decent step by step method of weathering it fairly heavy.  He used a product from AK Interactive called "Heavy Chipping Effects"  I've heard of the product, but never looked into it.  After a few hours of surfing I found out it was basically nothing more than using the Hairspray method to resemble chipped and worn paint.

I set about to recreate this using a couple of El Cheapo Atlas plate girder bridges I had on hand.  The first thing I did was to paint them with Floquil Oxide Red, then went back over the ribs with the same Oxide Red but added a bit of Floquil Roof Brown to make a shadow rust color for a little variance of color. 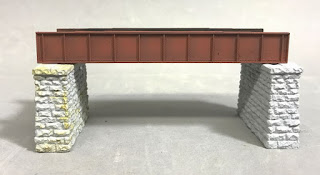 Then I added some Bragdon Rust powders to vary the rust color further, then sealed it with a lacquer Gloss coat. 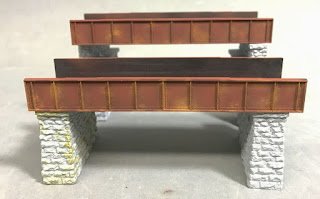 Next I sprayed on a good heavy coat of some El Cheapo hair spray for a the "Chipping Effect" later.
The next step was to add the salt for the "Salt Weathering technique. 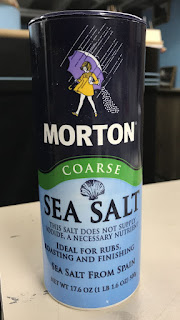 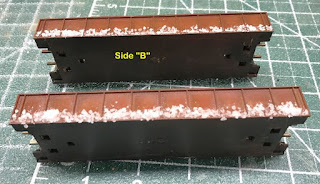 Now I've done both sides of these two bridges, but I was a lot happier with Side "B" so that is what I'm showing, both side "B"'s. I had too much salt on the "A" side.

Once the salt dried, I knocked off the excess that was loose and I brought out the Flat Black acrylic paint and shot a decent coat over the remaining salt and let it dry (I'm showing side "A" because I failed to a shot of side "B" with the paint). 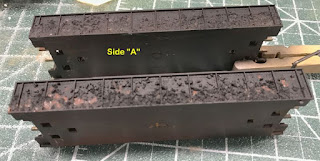 After the black paint dried I used a stiff brush to remove the remaining salt. 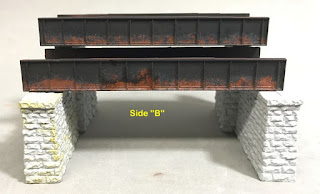 With the paint dry I grabbed a medium stiff brush and some water.  Now to see if the Hairspray technique was going to work?  I dipped the brush in the water and brushed it on the areas of the black paint and started lightly scrubbing.  Within a few seconds the black paint started to chip right off!
Look at the previous picture and you can see how much I "chipped off". 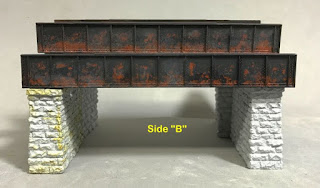 YES!  I was heading in the right directions with this!  But it was a little to stark of a contrast so I drug out my new Pan Pastel powders to work them over a bit to see if I could blend things together for a better contrast.

I used three colors, Black, Rust and Dark Brown.  This is what I ended up with. 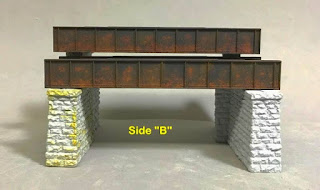 I think this is what I'm looking for!  I might try to go back and touch up the black on the test bridges with a bit more black powder, or I'll use less brown on the actual bridge.

I got the actual bridge painted and ready for the weathering steps I listed above. 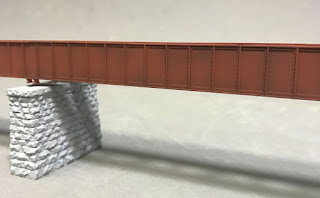