Well the track gang foreman got the pink slip today!

Quin came over for lunch today and took a look at the new trackwork.  After a few minutes of discussion it was decided to modify the tracks at Ruston in a way that was very close to what Greg B. told me to do the other night.  I should have listened to him, but I didn't have a large RH turnout in my stash.  After lunch we picked up a large RU turnout.

I removed all the mainline track from the South turnout at DuBach to just past the diamond at Ruston. Then I pulled up the junction track.  Quin had the idea that if I curved the ICG track further to the South of where the old 45° diamond was and installed a new 60° diamond that it would give the illusion that the ICG was heading off in a Southerly direction away from Dubach if you looked at the whole picture.

So I pulled out the rail nips and cut the mainline a few inches South of the old diamond and began to gently curve the mainline back towards the backdrop.  I did the same with the junction track.  This moved the junction turnout about  3" closer to the backdrop and gave me a much broader curve leading into DuBach.

The only thing that kind of bugs me is the track takes a sharper curve through the turnout as it takes the diverging leg.  But if you look at the overall area it does have a much better flow through Ruston than it did in the original plan or the more recent arrangement.

Thanks for the input guys! 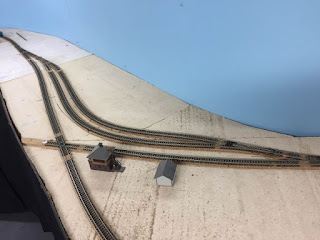 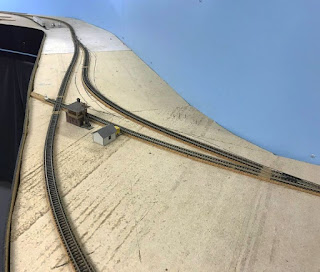 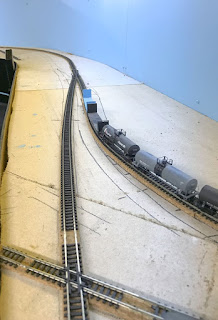 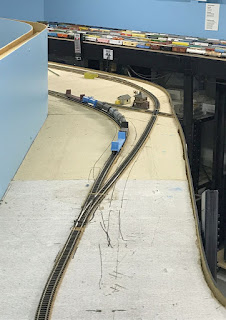 In this shot you can see how far I moved the new 60° diamond South, look at the two black marks just above the new diamond and after the track splice. 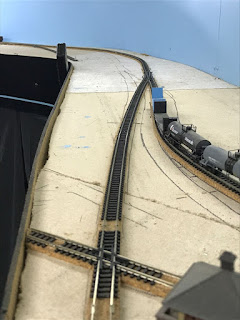 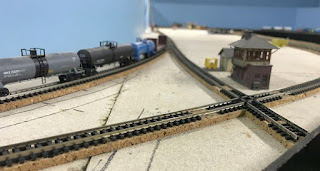 Another thing it did was to give me a much broader curve between Dubach and the junction turnout.
Looking at the black marks, you can see where the old main was located at. 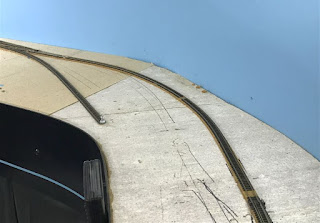 Now I just need to re-drop the feeders and file the track joints and I can move the next section.