This seems to have taken years for them to get here, it's been 8 years come to think of it?

When I first laid out the tracks between El Dorado and Calion, AR I wasn't really sure what I wanted other than a bridge scene.  So I laid the tracks straight hoping some idea would come along. 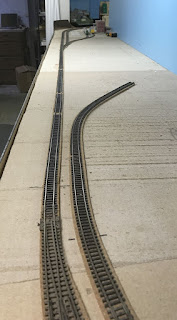 A couple of the crew remarked that I shouldn't have the tracks parallel the benchwork and suggested a slight curve in the main to break things up a bit, sounded good to me.  So what I'm planning is to have the main line curve towards the backdrop at a slight angle as it comes out of the yard in one continuous curve. It'll straighten up and cross the bridge and swing back towards the existing "MQ" siding at Calion.

The drill track will follow the curve of the main being just a bit sharper so it doesn't cross the river at the same angle.

I plan to install this Central Valley bridge on the drill track and add at least one or two of the Micro Engineering deck bridges to lengthen the span. 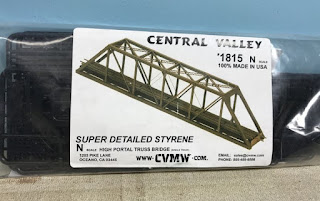 For the main, the plan is to use three of the Micro Engineering deck bridges for a 240' span across the Ouachita River. 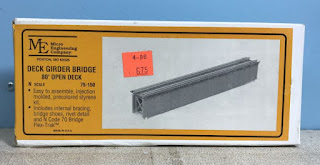 Tonight I got started on the first of the three deck bridges! 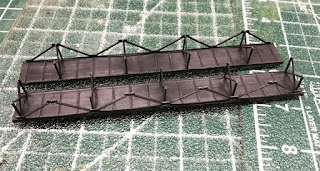 It's been years since I've built one of these, I hope I remember how to do it?