With the bridge built it was time to paint it.  I painted the Deck bridge black, but was unsure what color to paint the truss bridge.  First thought was to paint it silver, or should I paint it black as well?

After doing a lot of snooping on Google images I came across a lot of bridges that were an overall rusty color.  I'm assuming these were painted black and had oxidized over time to a rusty color.

I also did some searches on how to weather bridges and came across a couple of forums where a guy had painted his which looked really good.  He painted them to look like they had oxidized over time.  He didn't give exact formula's but I managed to get mine close to what he had.

The coat of paint was a rust color that was mixed using Floquil boxcar red, with oxide red and some orange.  Because I started with boxcar red this time, it was much darker than just the oxide red that I used on the deck bridge. 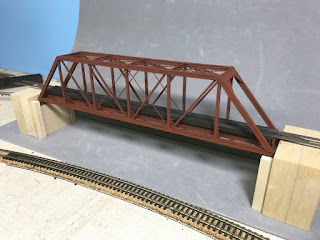 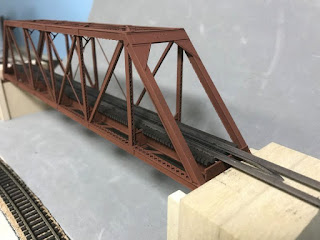 The second coat of paint was a mix of  Floquil black, primer gray and brown.  This gave the look of a faded black.  I sprayed this on sparingly so as not to cover the rust coat completely. 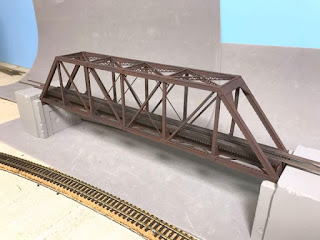 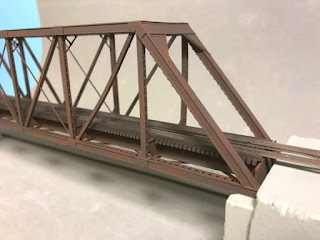 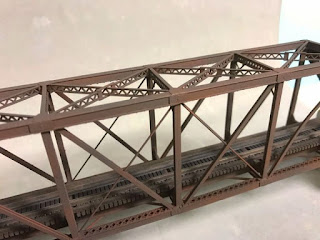 Unfortunately it came out a bit too brown because I used too much brown.  I needed to go back and remix the black so it was more "black" and respray it. Another option I thought about trying was to use a cosmetic sponge and "dab" the darker mix on.  But was afraid it would be too stark, besides that, trying to get the sponge worked into the inside of the bridge might be a little too difficult.

So I opted to use some black and brighter rust colored Pan Pastels.  This gave a nice mottled pattern. 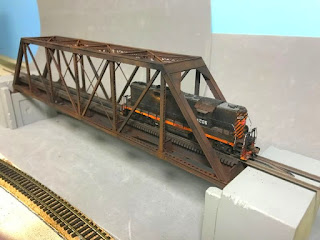 With this done, I sealed it with a thin coat of Dullcoat.  But as I was afraid of, the Dullcoat did make the Pan Pastels disappear slightly as it does when applied over chalks and weathering powders.  So I went back and touched up the bridge with a heavier dose of Pastels so that when I sprayed another thin coat of Dullcoat they would still show up.

I still need to go back and randomly apply some gray primer to a few of the gussets like they did on this bridge. 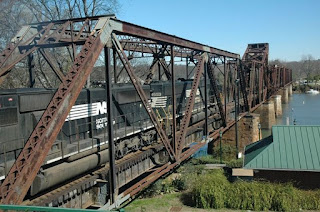 Next up, the abutments and piers...