Sounds of Construction in Malvern, part 1


With Ops session 6 behind me, I have decided to return to Malvern to continue with the scenery.

Not having completed the Heavy Metal building yet [which was my last project in Malvern], a new fire got started under my butt.  About a year or so ago I ran across a post on one of the forums that I belong to where the poster explained how he built a rather large industry on his layout using plywood then covered it with sheet styrene.  The best part of his build was the way he made use of Lego parts for the roof detail and other details on the buildings.

In my opinion he has done a wonderful job executing this build to a very believable, very large industry without a lot of expense.

Here is a link to Rich's post on The Railwire.

After seeing this it got me thinking that there was no reason I couldn't do the same thing with a decent result.  So I set forth.

Crushmoore Ind. is a Pulpwood plant that resides in Malvern, AR.  It's the largest industry in Malvern so I wanted it to be the dominating structure in town as well.  After seeing the size in Rich's post of his Asphalt and Paper plants, I knew that the "Milton A. Corp. MAC" [PikeStuff] kit that I was planning to use just wouldn't cut it any longer.

The first thing I did was to take some rough measurements in Malvern, then I used SketchUp to get a general idea of what I wanted.  After that it off to the shop to make the general build and see what I could come up.  No, I didn't do a mock up of the building first with cardboard like he did, but being a woodworker by trade, I had a good idea of what I wanted and how I wanted to build it.  This is what I came up with. 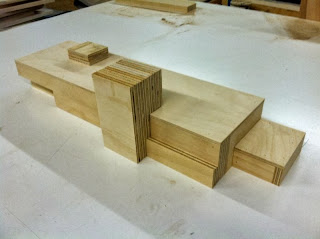 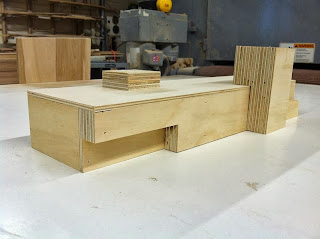 Once I got it home and set in place I seen that I needed to cut off 3/4" off the backside of the structure so I had enough room to fit an unloading shed in front of it. These were taken before I removed the 3/4" off the back. 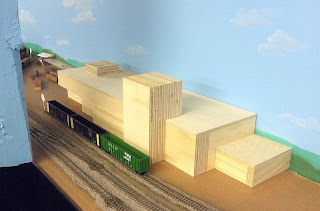 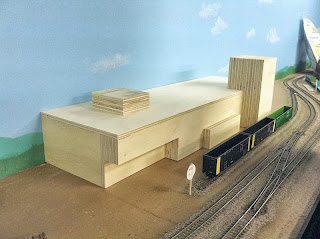 I originally planned to have the small, long setback be where the pulpwood logs would be loaded in to the factory, but after setting it into place I can see that it's too close to the tracks for my liking.  I might make this a place where I can back a tractor trailer under it so bark and scrap can be loaded into the trailer by means of a gravity or drop fill.

I might need to make some kind of a covered loading bay for the logs against the backdrop to the left of the building now, which should fit the footprint better.