Sounds of Construction in Malvern, part 2


After getting the building cut to size and seeing that it will fit the location, the next job was to add the styrene corrugated siding.  Never having done this before it took a little planing to skin the building.  I adopted my woodworking skills here again and started laying out the sizes so as to optimize the four sheets I had to work with.  As I was doing this I began to wonder what would be the best glue to use for the siding?

I did some research and posted some question on the forums as to what others have used.  Rich used CA glue to stick his siding to his buildings but I hesitated about the lack of time needed to position the pieces.  Others offered ideas of using CA glue, wood glue, liquid styrene glue and water based construction adhesive.

I liked the water based construction adhesive idea the best but had hard time locating any locally, It's made by Titebond,  Green Choice Construction Adhesive.  What I came up with was a water based adhesive glue made by Loctite called "Stick'N Seal"  Basically it's a heavy adhesive caulk, similar to their PowerGrab caulking. 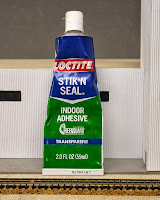 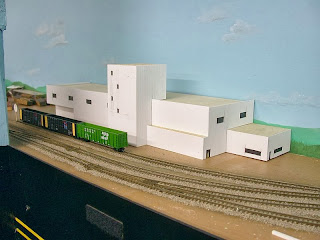 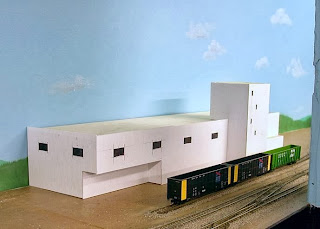 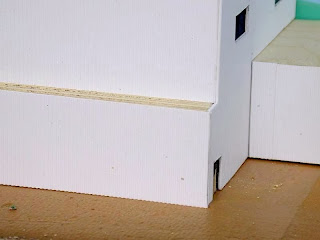 The corners came out pretty good for my first time but I might go back and either try to fill them or cover them with a corner bead once I get things painted.