The last time I was in Malvern to check up on things and seen that the Olin-Chlor expansion project had got started was last January!  It sure doesn't seem that long ago?
Spring came and went and before I knew it, summer was upon us.  In June I managed a trip up to Little Rock and got lucky enough to see the SP and Rio Grande power sitting on the house tracks, unfortunately I never did seen any of that power roll through on any south bounds.  Maybe they got put on a different train and headed back to the high country, which would be my luck.  But there is always hope, so I will definitely keep the camera and scanner close at hand.

This past summer has been exceptionally busy for me for some reason or another and my rail-fanning trips have been few and far between.  Now that summer is winding down and the weather is starting to cool off, I decided it was time to head north again and see what's been happening along the rails and see what's up in Malvern.  Maybe they got some more ALCo's or maybe they got around to painting some of them?

Unfortunately I didn't see Homer at the W&OV shops this time so I wasn't able to take him up on that offer for that up close and personal inspection of some of their newer ALCo's that he offered me back in May.  So I just snooped around the shops a bit but all of the W&OV power was gone.  I figured the Razorback must on the road somewhere and the local switcher being gone, made me suspect they needed some extra power or it was elsewhere getting some work done.

Getting skunked at Malvern with nothing to shoot I decided to head past the Olin-Chlor plant to see how they were coming along with the expansion project.

A link back to "Olin-Chlor expansion part 1"

The last update was back in January!  Where has the summer gone!
I had planned to spend most of the hot summer days in the basement working on this building and Malvern, but as I often do I got sidetracked.

In April I planned for an ops session so I got that ready and and out of the way, then shortly afterwards KATO announced their new F2's in the Red and Black scheme.  Not being able to pass them up I ordered a pair.  With them on their way I decided it would be cool to have them run with my Intermountain FT's so I got them chipped and readied.  That lead into a frenzy of chipping a bunch of my other Red and Black units along with some of the older Maroon units so I could run another session with older power for something different, which we did in August.  Time flies when your having fun.

Along with all that I had several smaller projects that were cluttering up my bench that I wanted to clear up before getting back to Malvern.  One thing I hate is having too many Irons in the fire, because then I go downstairs and and just stare at the workbench trying to decide which project I should do next?  Maybe it's just OCD?

So after getting all the smaller projects cleaned up and my supply of chips exhausted, and the skirting hung, I could feel the yearning of building coming on again.  Last night I cleared off the bench and gathered stuff up to work on the Olin-Chlor building once again.

The last time I worked on it I had gotten the "For Sale" sign cut up and attached to the main building.  The next step was to get the Ribs cut and glued in place.  I also decided to add a rim around the top edge to make a clean line, it's not the way that the prototype was made, but it would give me a nice break line and someway to cleanly finish off the tarred roof. 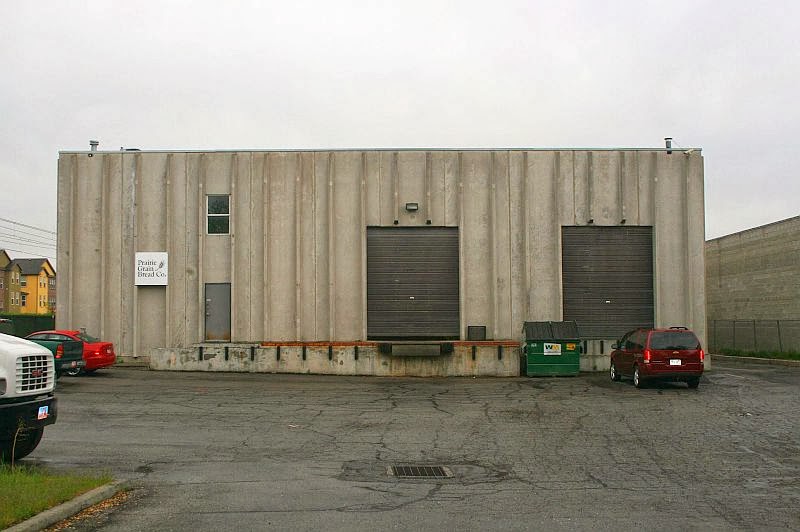 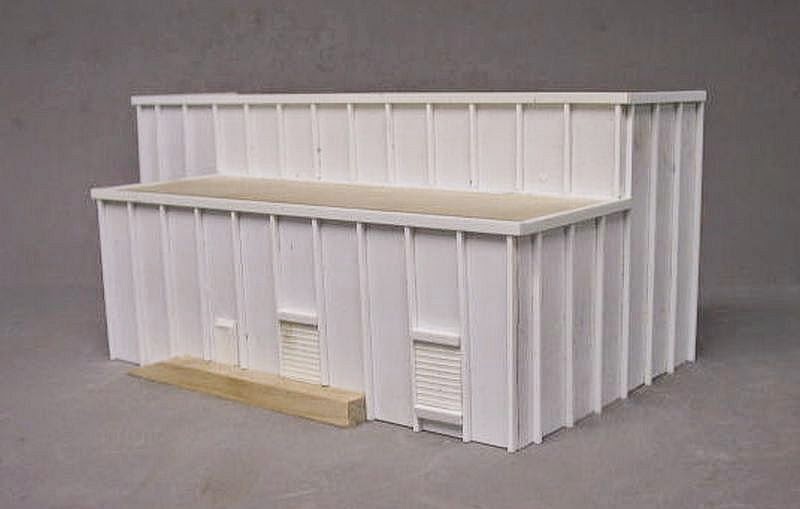 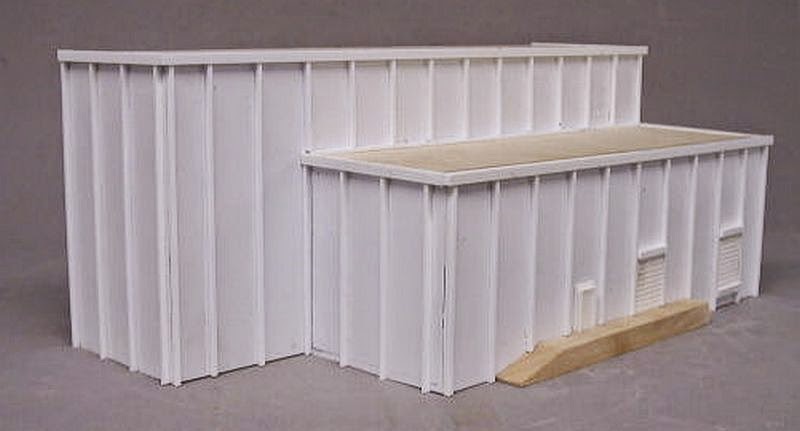 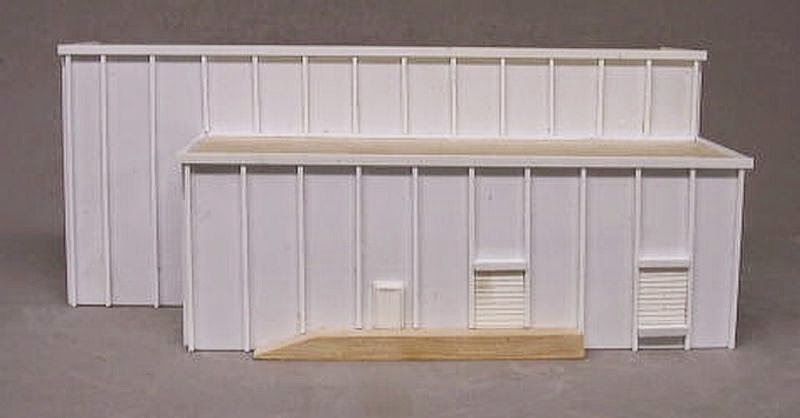 I pulled out my modelers license and spaced my ribs a bit farther apart than the prototype, I did this so that the overhead doors would fit between the ribs.  I also thought with more ribs, it might look like there were too many?   With this done, I positioned the loading dock and lightly tacked the doors in place so I could to prep everything for the painting.

I then removed the doors and loading dock and pulled out the airbrush and loaded it with Floquil Concrete.  I painted the doors and window with Floquil SP Dark Lark gray and the two truck bumpers with Accuflex Weathered Black.  After things was dry I glued them all into place.  Again, for the roof I used 320 grit Wet/Dry sand paper glued it down using the same spray adhesive I used to glue the sides to the wood building. 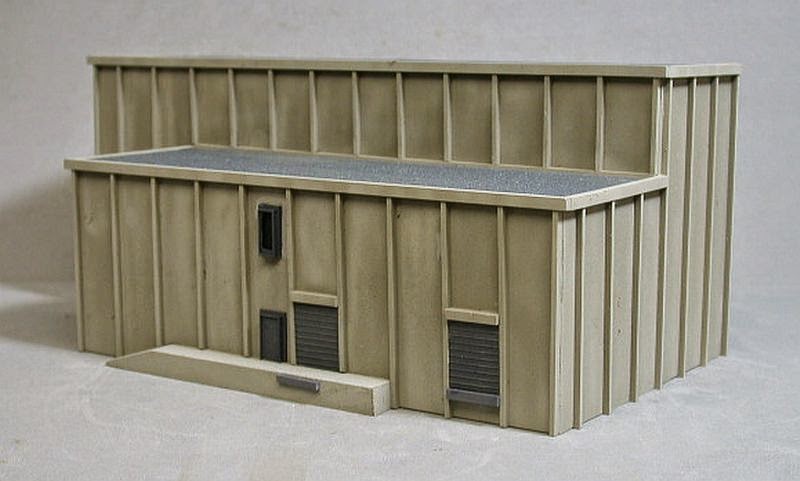 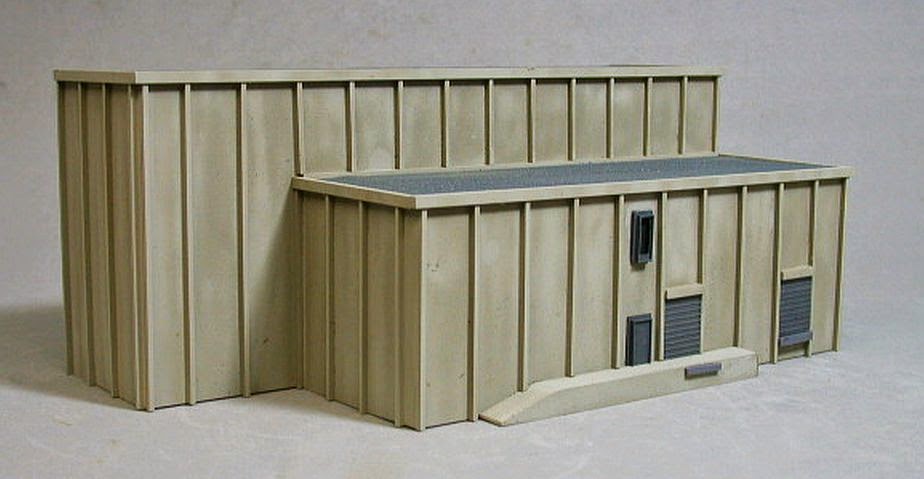 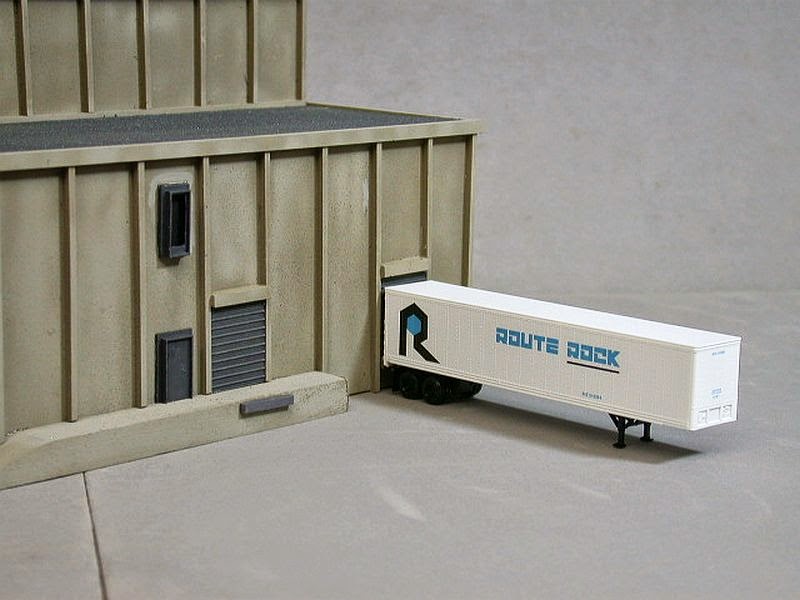 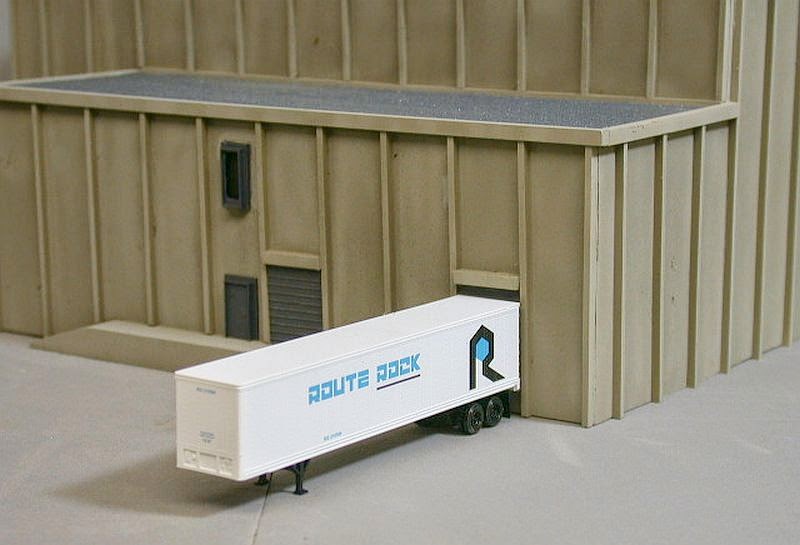 Next I need to seal the building with a flat finish and then dig through my stash of LEGOs to make a few rooftop details (gotta love LEGO's), add a sign and then weather it, but this will come a little bit later.  Right now I'm just trying to get the main building done so I have an idea of where I can position it before planting the grass and laying out the parking lot.  I still need to get the two cooling towers assembled as well.