OK, Bob Ross I am not, but I'm pretty happy with the way the backdrop turned out.

This was the stage had me worried, I have never done any sort of painting before but decided that if I wanted something that looked halfway decent I was going to have pick up a paintbrush and push myself.  I did a lot of Youtube watching and conferred with Quin about how to paint my backdrop.  He gave me some great suggestions along way that proved to be quite a bit of help.  Thanks Quin!

While I felt the distant mountains looked good, I couldn't help but wonder what an actual 3D tree planted in front of them would look like?  Would there be too much contrast?   I kept thinking that I needed to have some sort of texture to help blend the 2D background trees with the 3D trees on the layout?  At the saame time I didn't want to have paint a mural to get the results.

This turned out not to be the case.  Quin explained that the darker colored hills were nothing more than a shadow layer that I was suppose to paint the forest on, thus giving me more depth to the scene, so I began using a sponge and dabbing method with a darker rich green.  I got the hills about 90% covered up with the sponge.

While the sponge worked good for this, I couldn't get close enough to the ceiling tile, so I tried using a 3/4" Filbert brush to get paint on the bottom 1/2" of the backdrop.  Then I tried using this brush on the next lighter color of green but I couldn't get the stippled effect I was looking for.  I had used a cheap 1" painter brush to get a rough edge on the nearest hills, but for the trees the pattern was a bit too big. So I grabbed 3/4" flat brush.

After getting the greens mixed to a lighter color I loaded up the brush, wiped off the biggest share of it and started to stipple on the paint.  This seemed to work better.  I continued to stipple on that color of green until I had covered the previous color about 75%.

Then I mixed up the next color of green several shades lighter. Being lighter I only applied it to half of the hills and not the entire area. This would give the appearance of sunlight hitting one side of the trees and would help to reinforce the Depth of the scene.  I kept mixing the green with a lighter green and yellow until I felt I had sufficient Depth.  As I moved down the layout I could feel myself getting the hang of this and quite often I returned to a previous area to apply more highlighting to match what I had recently done.

I was worried the whole time that I would go overboard and ruin the scene, so when I could stand back and see the Depth, I stopped, took a few pics and sent them to Quin.  The next morning he replied that they looked awesome, and I breathed a sigh of relief.

See what you think? 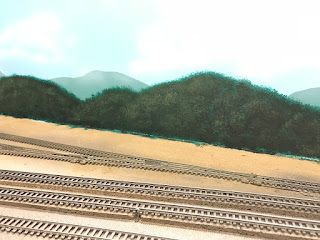 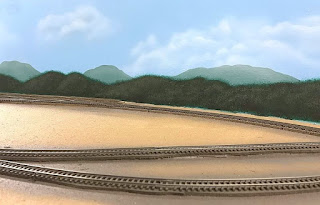 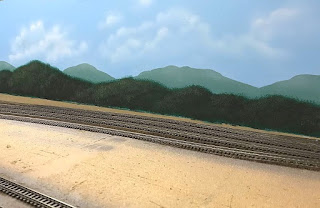 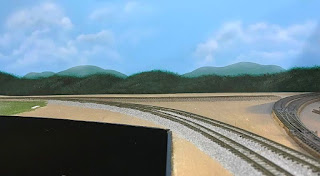 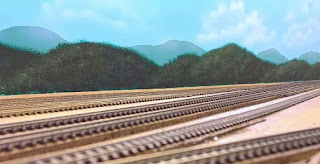 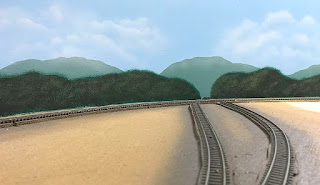 The next night I cleaned the rails again and started putting back the structures and rolling stock and grabbed a few more pics.  All in all I'm pretty pleased with how it turned out.  Now at least I have some faith that I can replicate this later with a few changes and complete the backdrop. 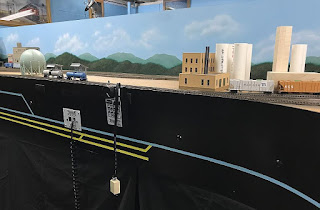 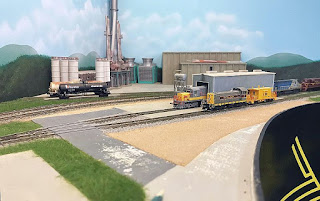 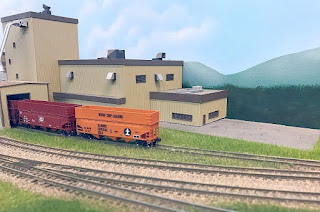 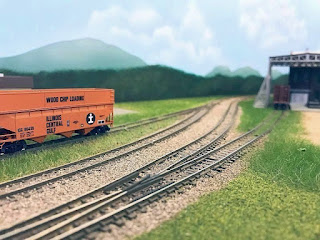 This it the paint and the colors that I used. 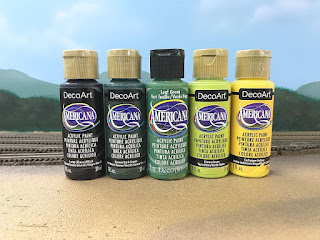 Quin just edited this picture for me! LOL
I wish I had that much hair... 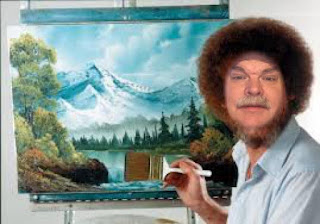