With the track all painted in Haskell it was time to step into some uncharted territory for me...backdrop painting.  I tried this years ago on some modules that I had built but was unsuccessful.

Fast forward to the present.  I began building the current layout in 2007 and several years into I got a backdrop installed.  Soon after I got it painted blue and was pretty happy with it.  It stayed blue until a few years ago when I got some scenery installed in Malvern using the same basic technique of two tone hills.

So the first thing I wanted to take care of was getting rid of the screws that I used to secure the backdrop.  I used panheads until I knew for sure what I wanted. 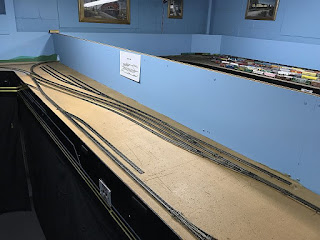 I started countersinking some new holes close to where the old screws were at, then I installed new #6 x 5/8" screws with a countersunk head.  Then I puttied the holes up and sanded them smooth and touched them up with the original blue. 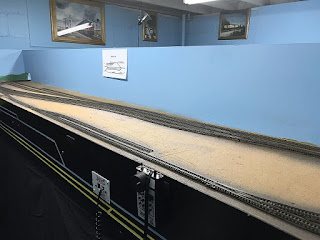 I had done a lot of studying of backdrops on the web.  I later stumbled across and started watching a blog by Eric, a.k.a. Pomperaugrr and his N scale layout based upon the modern version of the (HRRC) Housatonic Railroad.  He had posted a few updates of his backdrop that caught my eye.

I like real backdrops but could never find anything produced that was close to what I wanted nor did I have the ability to go photograph the area I was modeling.  So I kept surfing....I remember reading somewhere that a backdrop should never be so good that it should distract from your modeling.  However I've never seen any photo backdrop do this.

After rummaging through a lot of pictures and "How to's" on the web I kept coming back to Eric's backdrops.  There was something about this simple method he produced that always kept drawing me back to it.  I think what I liked about it was, it had enough to give the scene depth but yet it was simple and not overpowering.

My next step was to get some paint but I struggled for a while over which colors to get.  With help and guidance from Quin,  I found some paint sample online and decided to pick up a quart of each of the two colors I settled on.  I went a local Menards store and got the cheapest flat paint I could find.  I figured this should give me more than enough to finish the entire backdrop and then some. 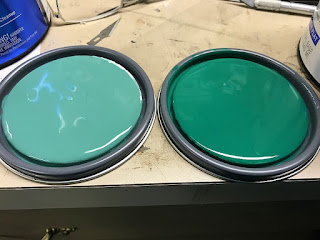 One issue I was having was trying to mix and match what I had previously done in Malvern.  Every time I mixed a batch it was always off a shade or two, so with the two quarts I should never have the troubles matching colors again.

I sketched out an idea of where I wanted the distant hills to go and grabbed the light colored paint and 1" foam brush.  I started with a Pittsburg color called Jaded Green.  This was green but has a blue tint to it. 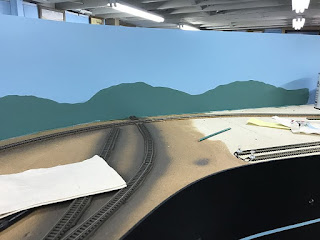 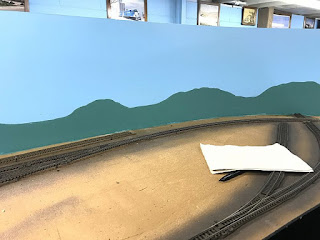 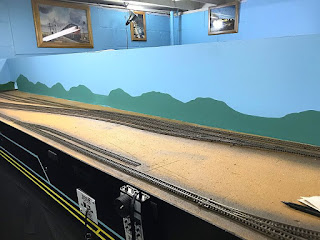 Then I used the darker color, another Pittsburg paint called Deep Veridian, this has no blue tint. I started painting the nearer hills, because they were a cheaper paint I had to give both colors a couple of coats. 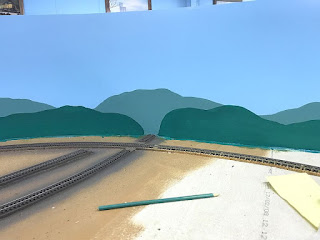 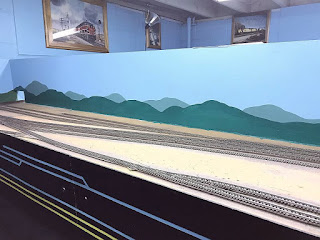 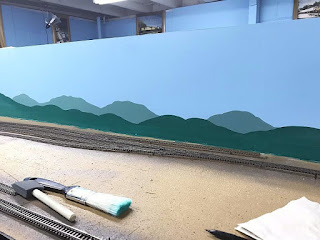 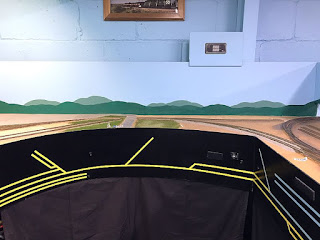 I was pretty happy with the results, even though the paint dried a few shades darker.

Next I wanted to try a tip that I picked up from watching a video that Dave Frary posted.  After he painted each set of hills, he went back using a can of white primer, added a mist of white over the hills he had just painted.  He said this helped to define and add a touch more of depth to the hills.