I got after the clouds today.
Clouds have always been perplexing to me.  Most say they are easy but there are as many different ways of making them as there are clouds.

While watching something on FaceBook the other day where a painter used nothing more than a rattle can and stencil he made some pretty realistic clouds very easily.

While I've know of stencils I never really looked into them before.  I found several videos on YouTube showing how some made them and how they used them.  It seemed pretty simple?

I made mine from a sheet of black poster board I got from Wally World for $0.97 and cut down into smaller sections that were easy to hold and maneuver.   On one I cut out the clouds with a knife, the rest I just tore out sections randomly.
Then I folded the top portion over 1" or so to give me something to hold them with and also to keep them a bit  more rigid.  It also acted like a shield from any overspray. 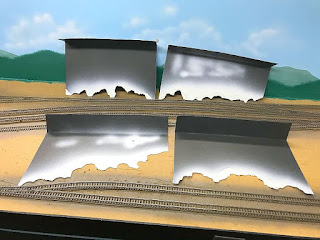 I gathered the needed supplies and started playing on some plain cardboard.  Didn't seem to tough, but I realized one thing.  I found I didn't want to use a rattle can due to the small height that my backdrop was.  So I got my airbrush out and wound up using some thinned down cheap acrylic paint that I had on hand.  The airbrush didn't have the power to spray the paint all over the area and create a fog.

As with anything, practice makes perfect, and I still need a bit.  Also found it kind of tough not to over do the clouds.  Referring back to Eric's Housatonic layout, where Eric painted clouds continuously around his backdrop, I wanted some space between my clouds.

Things I learned.
Do not hold the stencil too close to the back drop.
When overlaying the stencils keep them closer than you think you will need, this keeps the clouds more solid.  I had to go back and fill in on some of them.

Could they have been done better? Yes
Will I get better at this? Probably.
Can I fix the clouds I already sprayed? Yes.  (Paint over them with blue and respray them, lol)

Anyway, here is what I came up with.  Not perfect, but I think they'll work. 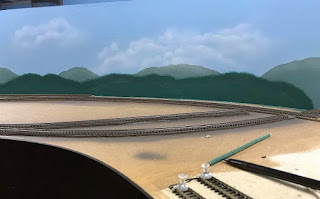 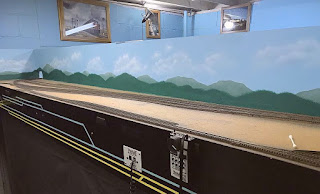 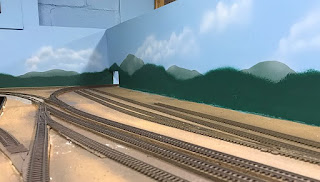 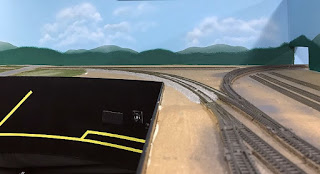 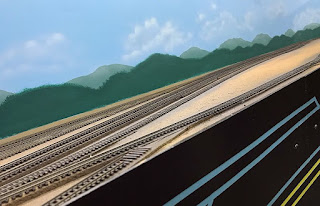 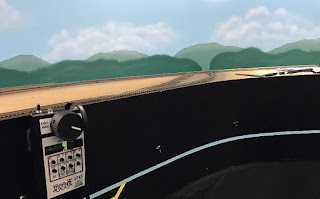 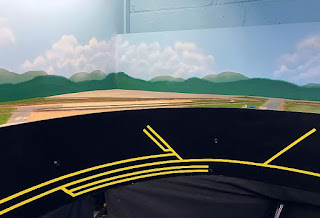 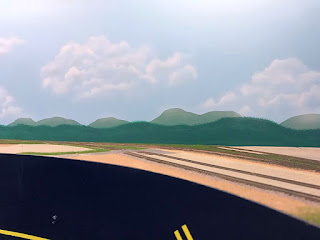 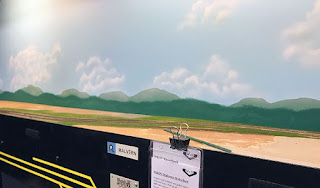 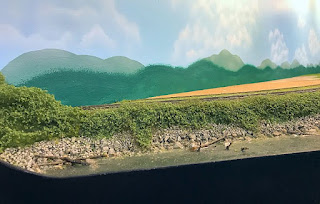 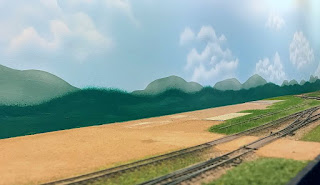 Next up I will be adding the blotch trees to the foreground with a pallet of acrylics.  This is the part that has me worried, I'm not a artist...