Overall it went very well, and didn't encounter many issues.
Then again we didn't have a full complement of crew, only about 4 at one time. So none of the through freights even left the staging yard.

Here are a few pics that I did manage to catch, but got too involved to get many more.

Train LRMP-W on the north end of Haskell. 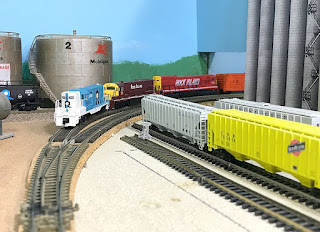 After setting out the cars at El Dorado, LRMP-W passes the new house track at Ruston. 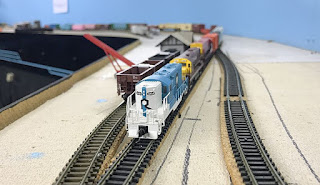 MPLR-W  just left the yard and heading north through Winnfield as it swings onto Tioga Jct. 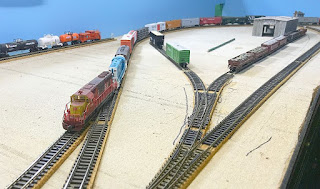 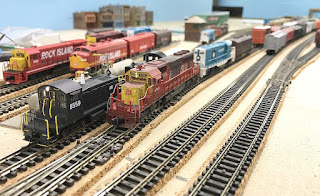 Once the work is done, MPLR-W crossed the Ouachita River Bridge and throttles up. 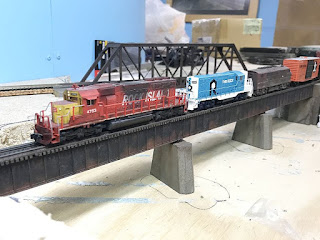 I don't recall having any shorts due to locos shorting out on the PECO turnouts, a few did occur which were crew errors, me included.  Quin had a difficult time with a few new BLMA flat cars that was were thrown into service for the new industry at Ozark Irrigation.  I do believe that can be chalked up to the fact of BLMA wheels and the turnouts they were picking were in the yard at El Dorado, turnouts I that I did not shim?  I guess I'll look into doing that.

As for the track work re-alignment that I worked on all summer and since last November, I am happy to report that reports came back from the crews that the track work was good and smooth and ALL is good on that front!  So I now feel confident to start on some scenery, just not sure where?

Quin started out working El Dorado with the two new SW-1's I picked up.  While I was testing them before the session with good results, he was having issues with them stalling quite a bit.  So he switched back to the ex Rio Grande GP7 and had much better results.  Well after the session was over with I went back down to clean things up and decided to try the pair of SW-1's again.  I had no issue with them what so ever?  So it must have been that the tracks were still a dirty and got cleaned off by the time the session was over?  I'll keep playing with them for awhile l before I decide what to do with them.

While we didn't have many shorts in the main staging yard, I will say that in the 11th hour I picked up some cheap clear nail polish and painted the rails on the Atlas turnouts as I did have a few shorts beforehand.  I know this only a temporary fix, but there has been some discussions in my head with the inner voices about ripping up some if not all of the staging yard and redoing it with a better design?

This yard started out as nothing more than a staging yard for our expanding Bend Track modules back in the day.  The last time I rebuilt it and re-laid the track was in 1997 just before we went to the NMRA national.  After that show it was never used again until I started building the layout.   I made some minor modifications so that the whole yard wasn't a giant reverse loop and it has worked very well since, even with the old Atlas turnouts I used.
Thoughts will continue on this....

The upgrade from the Simplex to the Duplex system worked just fine and no one complained about NOT having to plug and unplug the throttles to gain or release control of the consists.  It was actually a pretty nice feature.

Due to not having a full complement of crews on hand, the Job Board and Seniority System was not implemented, however I think this will work if needed.

This brings me to an issue that has been chewing on me for a while now.  I've been toying with the idea of tearing down the layout, well at least paring it back to a more manageable size?  I know I wouldn't want to make it any bigger, but smaller is looking kind of nice lately?

There are several reasons for these thoughts.
1) Maintenance.
2) Work to get things setup and running
3) Maintenance.
4) Lack of being able to get anyone over to run an operating session.
5) And a number of other minor things.

While getting things up and running for this last session I needed to go back and re-program some locos, clean a few and adjust several cars.  I know this goes hand in hand with any layout, but this is, at least to me, a fair sized layout that can and does take a bit of work to maintain.

Now with that said, I do think I have passed a point of the major building and after all the work that I've done over the last year I may just be a bit burned out?  But I do not see myself without a layout, I'm just too much of a busy body not to have something to work on in my spare time.  So I've been toying with the idea of paring back the layout to a more manageable size, one where I could play trains by myself and if I can still get 3-4 others (mainly the core crew members) together once in awhile it might still be worth doing.

Even still, the layout will still need to be much bigger than a small peninsula or HCD layout.  If I can't do ops, then I will forego that idea.  Over the past year I have seen some very nice HO scale layouts that take up a bedroom of at least 10' x 10' and they've been geared towards operations.
But I just don't know if I can handle something that small without getting bored running in circles and having much shorter trains.
Decisions, decisions.....

I do know that I've had to cut back the length of my trains from when I first designed the layout, but looking back at that decision over the last 4 years, I have not regretted it.  In a way, shorter trains seem to work much better just due to the physical forces that are put upon them while switching.
Originally I had planned for around 25 cars per Local, but had to cut them down to 15 cars.  Now looking at working them during a session, it feels right.

I know with a layout of my size and limited crews on hand, we can still operate and have a good time. What the four of us did this time was to just run the four manifests that feed cars to El Dorado yard where they're used to built the three local turns and get them sent on their way.  None of the Through trains even moved from the yard.   Which seemed to work out very well and was very relaxed?

And maybe this is what I need to focus on, maybe this is my answer?   Continue on the layout as planned, and when an op session is called for and only gets a small number of crew from now on, piss on it!  We'll just run the basic trains and work the locals in a relaxed manner and have fun?

Maybe I just need a bit of a break as well?