Out with the old, in with the new pt 2

Tonight I got the second set of PSX boards and the AR board installed for the Staging yard.  Turns out I bought one too many PSX boards, Oh well I have spare now or I'll use it for the engine terminal as I got thinking that I wired it in with either the Reverse Loop or one of the yard due to the way I used the PM42 outputs? 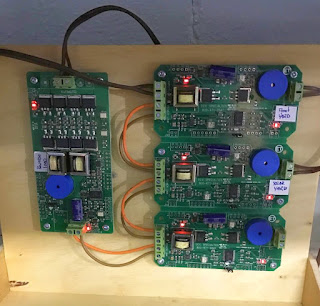 Gonna have to get my jungle gear on and delve into the wired jungle of the yard to see if I can figure out what's up.

The second thing that I can't figure out is some of the buzzers are singing continually even with no short occurring?

The third thing I found is the buzzers ARE working properly, but they are just too high pitched for me to hear unless I'm right on top of them.  DCC Specialties did say there is another buzzer that is 17 dBs louder and has a lower pitch, but not by much.  Also the other buzzer is 30mm in diameter which should fit, but it will be close.  But I know it will not fit on the AR.

Not sure I'll try them or not?  So I will probably go ahead and add the LED's for a visual notification if there is a short.  Just need to find some that will work the way I want to use them.