Last night's session went off pretty good.
Some typical problems arose such as dirty track and dirty wheel from not having played with things since March of this year.

The only major issue we had was with some anomalies within the Wheel Report. Doug found several times where the Blocking Sheet was calling for cars that were not delivered to El Dorado and was not even on the next train?

At first we thought he was just having troubles reading the sheets, then the thought occurred that I might have gotten the wrong sheets in front of him, but then he said there was a call for an All Door boxcar that wasn't on the Yard Master's list that Quin and I used to stage the trains with.....Hmmmm, something is amiss I fear?

Other than that, all things went very smoothly.

We also had a repeat visitor from K.C.  Coy Coles and his wife made the trip to play trains with us again.  We also had a newbie join us this session!  Bill S.  (more commonly referred to as "Wild Bill") and his bride Jeannie.

All told we had 7 crews working last night:
Quin, Doug, Jon D. Coy, Bill, Lynn and myself.  Thanks for coming over!  Hope the rest of the crews can make it the next time?

Here's a few pics from the second half of the session after I remembered to grab the phone.

Doug is gathering up the last of the outbounds before the LRMP-H and MPLR-H arrive. 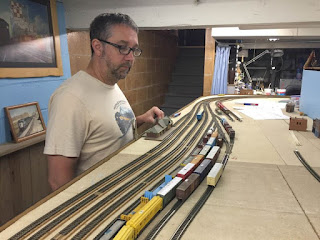 After running a few Through Freights, Coy decides to tackle the Winnfield Turn.  After arriving at the first stop in Dubach, he begins the sorting process. 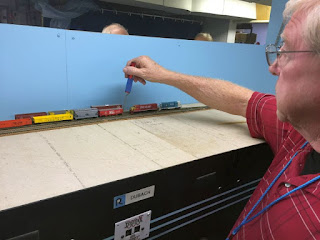 Shortly afterwards, Jon brings the MPLR-H to a stop as Coy feverishly tries to clear the main at Dubach.
Dubach is not an easy section of the Winfield Turn to work. There can be a lot of cars to move and not much track to work with.  This is one section I plan to work on and lengthen the sidings a bit so it doesn't get so crowded. 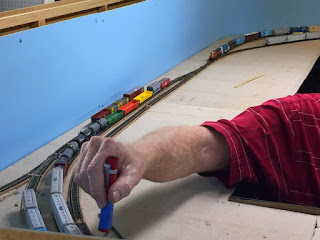 Wild Bill is watching how things are done, unknowingly, his throttle time is coming. 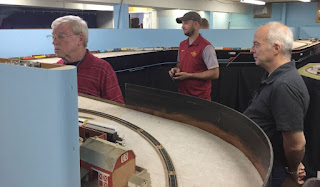 Here Quin is giving a "Reach Around" as he works at sorting out the newly arrived cars in Malvern. 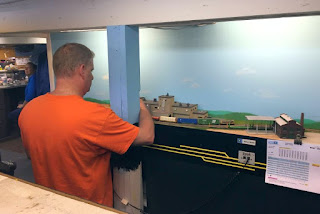 Wild's throttle time has arrived!
He was watching me get a train ready to depart from staging, when he asked what I was running next, I replied "You're running the Pig Train" and handed him the throttle.
And that's all it took!  He ran several more after that!  I think I gained another crew? 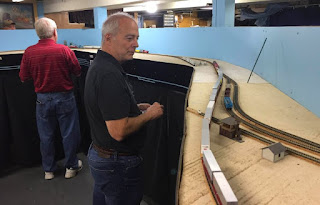 Jon!  Pay attention to what you're doing! 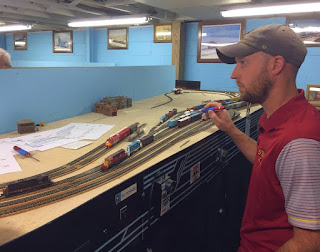 Back in Malvern, Quin has just about got everything finished.
He's one of our more proficient crew. 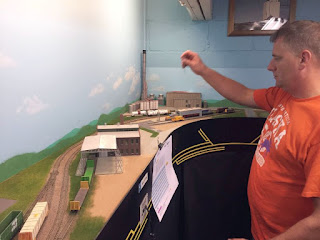 Caught a race in El Dorado.
While Jon was leaving El Dorado with the MPLR-H, Doug was pulling the new block of cars onto the drill track. 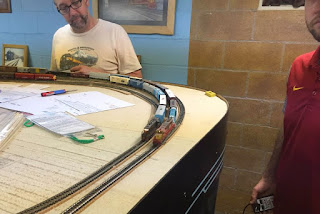 First time operating with us, first time earning the Asshat Award!
Wild earned it after putting a few cars on the ground a few minutes previously. 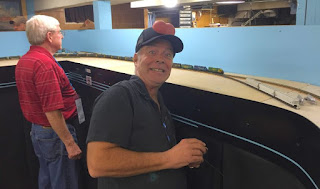 Meanwhile back in DuBach......
Coy is still slogging through the tasks at hand trying to get things finished up so he can move on to Ruston and Winnfield.  You can do it Coy! 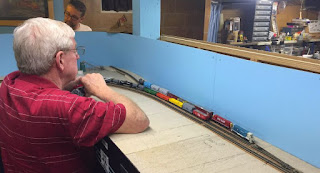 This time I caught up with Jon who's about to hammer the diamonds at Ruston, LA
with the final manifest of the session, the LRMP-H. 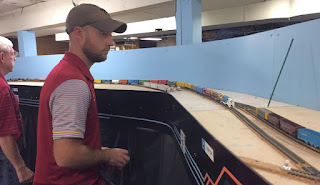 After this shot, I noticed my phone was down to 4% oops, time to grab the charger!

Unfortunately, this will probably be the last session for a while this winter.  Now I need to get busy with my "To-Do" list.  The first task at hand will be to replace the two aging Digitrax PM42 circuit breakers with some DCC Specialties PSX circuit breakers and one PSX-AR.   Once this has been accomplished I can start in on the planned track re-alignments.  First up will be to remove both sidings at Ruston Jct. and replace them with a single siding.  You can see the "To-Do" list here.

I plan to work on the list one job at a time and finish it before moving to the next job.  This way the entire layout will not be down with multiple jobs at once if we decide to have another session at some point or  if  I have someone drop by.

Stay tuned with the updates...