Several years ago I had an idea to have one switch that would kill power to the entire layout. Finally got around to it.  last night my electrician stopped by to finish a small project in the kitchen and had him tackle my kill switch for me.

So now with one flick of the switch, as AC/DC would say, the layout is on or off.  I took it one step further and had him add an outlet so when the stormy weather arrives in the spring and summer and there's bad storm coming, I can not only shut it off, I can also pull the plug and the entire layout is now unplugged from the rest of the house.

Not that this will be a sure thing if I get a good lightning strike, but it improves the odds of not having a bunch of puddles around the layout where my chipped locos were sitting or end up with a fried command station.  It's more of a piece of mind than anything. 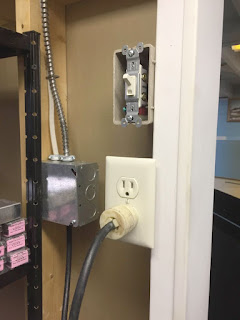