After getting the doors glued up I let them dry overnight then took them to a friends shop to use his new (2014) 2 head wide belt sander he got a few years ago. This one makes my single head sander look like something from the dark ages. Hey he offered...  :-) 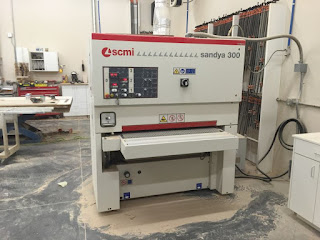 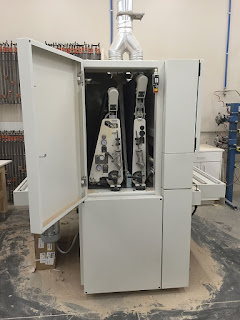 The second head also has a Platen (a metal bar with a stiff cushion of thick felt that pushes the belt down onto the material surface in order to achieve a smoother finish without excess sanding marks). The third and final pass I raised the second head and lowered the Platen so it just kissed the surface of the doors and drawer fronts.  This gives the surface a very smooth, even finish.

In the video you can see me turning the knobs to turn the heads on or off on the right of the control panel.  I'm not sure what the numbers are telling me on the top left of the panel but the rest set the thickness and the speed of the feed belt.  It's a pretty impressive machine!

Anyway, Mother came along to help tail for me to save some footsteps, she's been helping me for years and she also helped out Pop when he had the shop.  She's a good helper and well trained.

The next day, back in my shop, I got the router table setup with a 3/4"r bit to edge the doors and drawer fronts with.  I used the router table as I did not have a shaper cutter for the edge I wanted.

A quick disclaimer:  If you don't have a router table or familiar with a router/router table, I would not recommend trying to climb cut without some sort of feeder or experience.
What I'm doing on the router table is again called "Climb Cutting"  Only this time I am not using a power feeder.  While it's a large radius cutting bit, I'm not taking off that much material per pass.  I also know that Ash machines very well and I have waxed the table down good before running the edges, and have lots of experience doing this.

On the first pass I draw the door to me so that it is running with the direction of the cutter.  This allows the bit to remove the majority of the wood without getting any chipping or tearing of the grain, then I run the door through against the cutter (in the normal way) which the bit is then only skimming off a small amount of material without chipping or tearing, giving the surface a nice smooth, clean cut.

Again I would not recommend this unless you have or are familiar with the tool, the material and have some experience with a router or router table.

Here's the edge.  Several quick passes with the orbital sander will smooth these up and remove the small line on top left by the router bit. 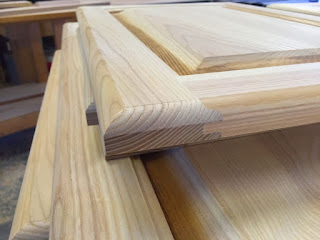 All done, ready to polish sand with the random orbital sander, ugh....the most monotonous part. 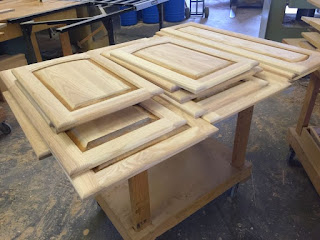 After getting these sanded, I'll punch the holes on the backside of them for the concealed hinges and then off to the stain and finishing booth.

Jump to: A New Kitchen pt9