A sand tower for the Biddle facility Pt2

I think I can stick a fork in the sand tower for now.

I picked up some K&S brass rod for the sand delivery pipes and used CorelDraw to sketch out a template for a pattern of how to bend and cut the pipes.  I was able to use the drawings to tape the pipes in place so I could solder them together as well.

Once assembled I secured them to the tower via a hole and epoxied them in place.  I also decided to make some outrigger supports to help keep them in place once installed on the layout with more Evergreen "H" beams. I also glued some thicker styrene blocks to the bottom for concrete pads.

Had to do some head scratching to figure out how to make the flexible hoses off the piping.  I wound up using two resistors and the cut the wire ends off and soldered them to the lower ends of the piping.

Once that was done I dug out one of the Gold Metal Model safety cage ladder kits and decided to see how badly I could I screw one of these up.  Getting the first couple of cage pins secured to the ladder was like an exercise in frustration.   I chose to solder the cage to the ladder rather than use glue because it was faster.  I was able to get several pins in place after the first one and got them soldered, then a few more.  Pretty soon I was working on the last one.

It didn't turn out perfect but it will pass the 3' rule I think.  The last thing I did before turning out the lights was to epoxy the ladder to the "I" beam on the tower so it could set up overnight.

The next morning after a quick inspection I fired up the airbrush and sprayed it with a primer, then sprayed some TCP Galvanized Metal paint for the entire tower.  Once dry I came back with a small brush and painted the flexible hoses with black paint and touched up the pads with some acrylic concrete paint.

For my first major scratch build without much of any plans others pictures, I'm quite happy with it. 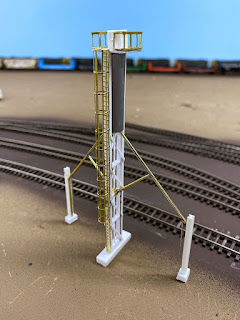 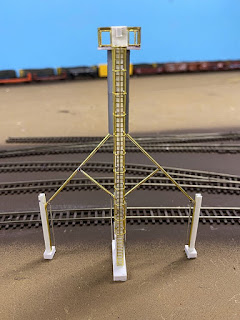 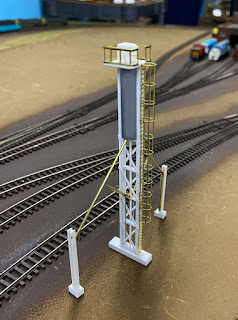 I sat it in place after getting it painted  to see how it looked.
I think I'm going to install a couple of locator pins so I can remove and replace it easier when I clean the tracks or work around the facility. 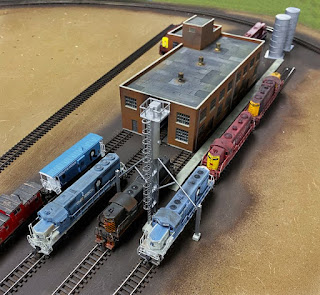 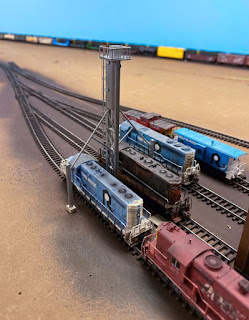 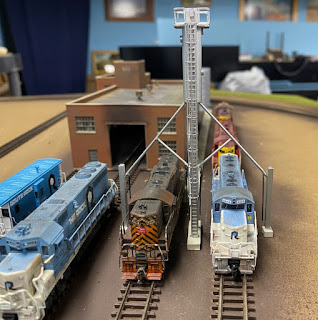 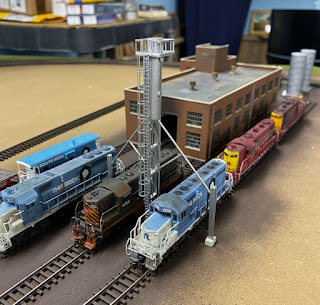 Next up comes the fueling pad and a set of power poles with step down transformers, those should be a much easier project.