Time has come to test the new reduced operation.  I have the layout staged and ready to go.

The plan is simple, one train will work the entire layout.  The W&OV, the ICG interchange and the yard at El Dorado will remain, but will not play an active part of this test session. 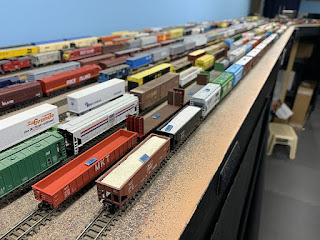 The locos will be pulled out of the engine house (the ladder track for now) with the caboose. 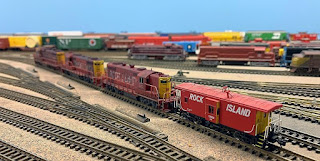 The local's crew will attach the crummy to the cars on track #1 and then run back and tie on to the head end of the train.  It'll leave the yard (Which represents Biddle Yard in Little Rock) counterclockwise and head south upon entering the layout at Haskell.
As it traverses south as train #773, it will work all the trailing point turnouts.  Once the run is finished, it will re-enter the yard to the same track from which it left.  This time the yard will represent the yard used in Alexandria, LA.
The crew will then place the crummy on the rear of the cars sitting on track two and tie onto the head end of that train and head back north as train #774 entering the layout at Winnfield.  Again it will only work the trailing point turnouts as it runs north.  When the it's done it will re-enter the yard (this time Biddle yard) and run clockwise back to track #2.  The crew will then cut off the train, grab the crummy and tie down at the engine facility.

The drawing below is only for illustration purposes only,  I have no plan to reduce the physical size of the layout at this time. 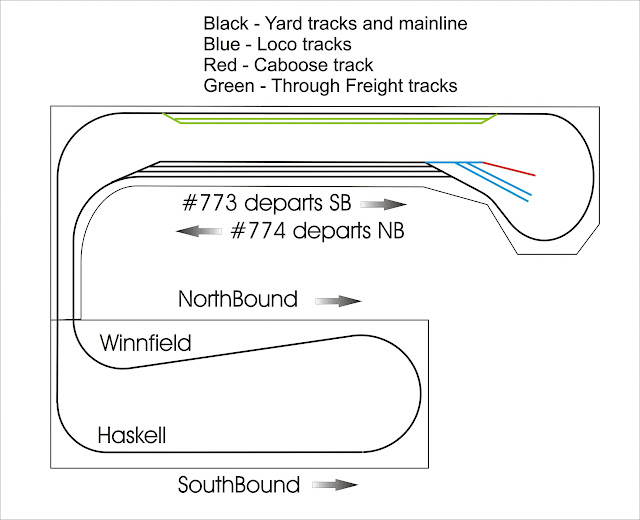 As I was sitting up the cars to be picked up it hit me that some of those cars will not need to go back to the yard, as they are captive service cars that run between two locations on the layout.  These can just be dropped off as they go past their destination.  Likewise, some of the cars that will be picked up off the trailing point turnouts will need to be taken back in the opposite direction.  These can be spotted on a siding or hauled to El Dorado yard and spotted so they can be picked up by the opposite train.

Some of these car movements only become obvious once I started placing tabs on the cars.  It looks like this could result in some interesting actions.   The overall goal for this is to reduce the amount of trains and crews needed and allow me to focus more on the switching.

If all this pans out, the next goal will be to rip up the entire staging yard and replace it with some better track and a much smaller yard and engine facility.