After the dry run Ops session I held, I noticed an Intermountain 60' flat car wasn't rolling very good, come to think of it, these cars never have rolled very good. After closer inspection a buddy noticed how high the car was sitting, even the coupler was sitting higher than the adjacent coupler.


Still not being a big fan of the metal wheel fad, I ordered a set of the BLMA 70 ASF trucks. I know these have been used to lower the ride height of cars and of course improve the rolling abilities. So I figured it would be a good test to see if these actually helped. 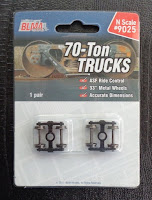 Right away I noticed it did bring the height down, the BLMA truck is on the left. 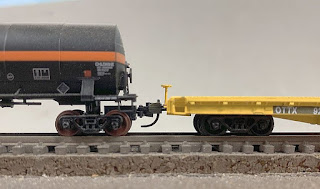 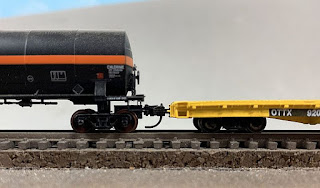 It actually brought it down to match the MTL truck mounted coupler on the tank car.  The only issue was the BLMA truck was rubbing on two areas of the underframe, so I took a #17 chisel blade and removed the raised section. 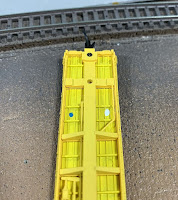 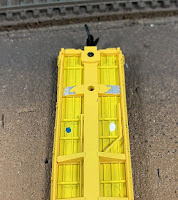 Once that was removed the trucks swiveled properly. It now rolls much better, more like MTL trucks and wheels sets do and the couplers match in height as well. It admittedly looks better being lowered.


God help me!  I've been infected with the dreaded "Ride Height Issue"!!


I know, I know! The tank car is sitting up like a 4WD monster truck, but this is on the bottom of my list of things to worry about. At least the flat car rolls better now. I've ordered four more of them to re-work my other IMRC flats.


These flat cars also needed more weight as well. I think I might try Over-weighting these cars? I've been reading on the MRH forum where guys are taking this seriously and really overweighting their cars.

So I added some very small buckshot like I've used on my other cars, I glued them in using white glue into the areas where they would fit, trying to keep them above or below the sidesill of the cars, once glued in I might paint over them.

But even with low angle shot they are not even noticeable. 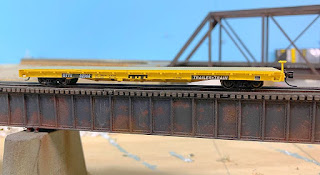 This brought the weight up from 0.7oz to 1.3oz. Probably not considered to be OVER weighted, but it's about what a 50' boxcar should weigh in at.