On the 18th of February we held our 13th session.
All things considered, it went well with only with a few exceptions and had a lot of "Firsts" this time around.

Since the last session I finally got around to replacing the old Digitrax PM42's with DCC Specialties PSX Circuit breakers and one PSX-AR.  The install and switch over went pretty well but had to call in some help when I went to program them.  I got to say one thing about them, they are much faster than the PM42's.  I know this because had a lot of shorts!

These all occurred when the six axle units were running. They would short out when they passed over the turnouts and would make contact with both rails after the frogs, something I seen only a very few times with the PM42's.  So I have a lot of filing to do on a bunch of turnouts, then I'll need to fill them with epoxy as explained here on this blog site.

I also modified my Tab System.  This time we stripped the layout void of cars and restaged the layout completely to see how this would work.  Everything worked just fine and this will also allow (or force) me to use more of my cars that I have in storage.

This was done for two reasons.  In the past sessions, four of the eight tracks in the front staging yard, we would keep a supply of cars on hand that we'd use to build the trains and stage the layout.  After a while we were seeing the same cars moving on the layout.  Hopefully we'll see some different cars riding the rails now?

The other thing that I did was to add four more through trains to the session making a total of twelve trains.  These four new trains replaced the supply of cars that were stored on the four tracks of the front staging yard.

With the four new trains added, I also wanted some sort of timetable or train sequence to keep things in somewhat of an order.  I wound up with a Train Sequence sheet which worked very well.

All staged and ready to roll. 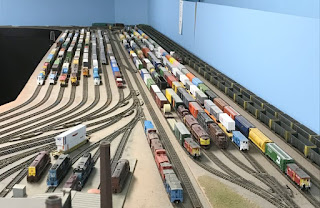 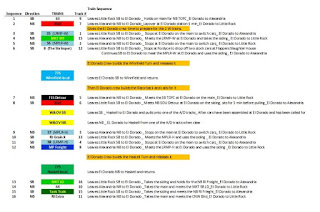 Another First was we had a new visitor to the Little Rock Line.
Rodney Edington (aka: rodsup9000) 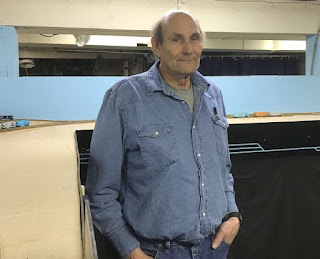 Also Coy Coles joined us for a 3rd time. 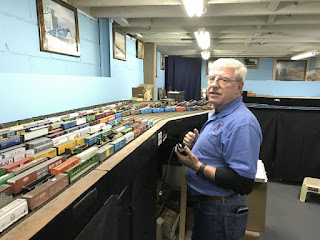 Thanks guys for stopping by.

Two of the four new trains that were added were two mail trains!  In the past I had an Amtrak train that ran but since the Rock never gave into the Amtrak service, I wanted something a little more fitting.  These two mail trains were made up of 6-8 TOFC cars on the front and At least one or two baggage cars and one or two coach cars.  This kept them classified as Red Ball freights and also were required to make a stop at El Dorado for mail or what little riders they might have had?
Plus it gave me the opportunity to run more Pig trains!  At least one of these were powered by some Vintage E8's that were custom painted by Park Loco Works last summer.  They are a welcomed addition to the fleet.
Thanks Doug!

Continuing with the lists of Firsts, The bridges between El Dorado and Calion drew a lot of attention and worked well. Can't wait to get after the scenery around the bridges.

The new Muddy Creek Mill at DuBach received their first shipment of grain.

And finally, all of the recent trackwork that was done seemed to work as planned.
The siding expansion at DuBach was worth the effort, or so I am told.

The biggest thing was I almost called the whole session off the night before!
Quin came over to help me get things ready and finish getting the trains built, layout staged and clean the wheels on the consists.  While he was cleaning the wheels I was working a few new decoder installs when he mentioned that he had a loco that was not responding.
I told him to set it aside and I'd look at it in a few.  Before long he said he'd found another one!
within a few minutes he had found about 6 total that wasn't responding!!!

It soon occurred to me that every loco that wasn't responding was wearing some type of TCS chip.
The front headlight would come on, but would not change in direction nor was there any motor response.
Well that did it, if all of my TCS chipped locos were now down, it left me very power short.
So I told him "Screw it, I'm done, gonna cancel the session!"
I shut things down and was ready to walk away.  But we decided to try and deduce what was causing the TCS chips to act up?  I had the El Dorado switcher giving me fits the night before Quin came over but got it working again.  All of the locos that Quin found was in the staging yard and the switcher was on the main layout?  So we figured it had something to with the staging yard.
That's when Quin reminded me of the short he had earlier while cleaning the wheels.

Right before he started finding the locos that wouldn't respond, he had accidently shorted some tracks in the staging yard with his watch band.  At first he thought it was just the locos shorting on the turnouts, but then he noticed it was lasting too long.  Then the lightbulb came on!
At least we knew the PSX breakers were working!

Sooooo, I turned the system back on to test our theory of something wrong with the staging yard and when I called up the El Dorado switcher, it came to life and ran just fine!  Then we called up some of the units he found in the staging yard and bingo!  They worked just fine now!  So we continued getting things ready.  What a huge relief that was.

For whatever reason when he created that short it scrambled ALL of the TCS chips.  None of the Digitrax chips showed any signs of problems?  Weird?  Oh well, at least things worked.
The only thing I can think of was it was a hard short and TCS chips are a little more sensitive than Digitrax chips are?

OK, on with the pics of the session.
I didn't get as many as I wanted to this round as we were a little bit short handed. These are not in any particular order this time.

New MKT and BN power is pulling the FPPX loads south through Fordyce and Calion. 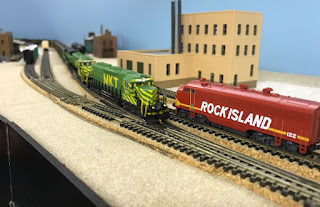 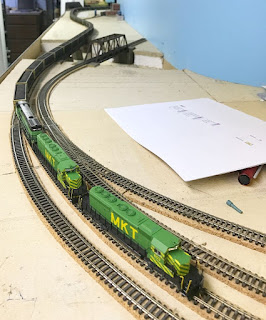 Jon took on the on El Dorado switcher for the first time as Doug keeps a watchful eye. 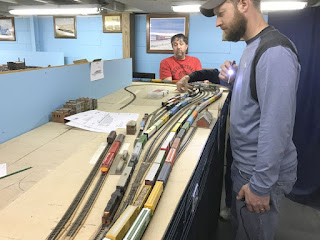 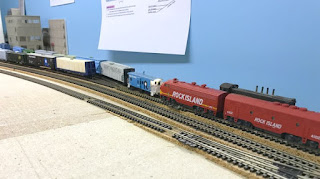 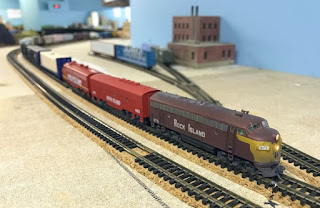 A rare shot of the ICG bringing cars to Ruston Jct. to meet the Winnfield Turn. 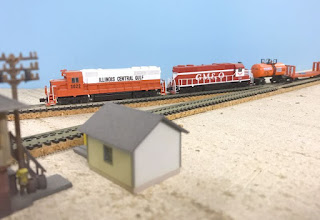 Some ALCo action in Malvern. 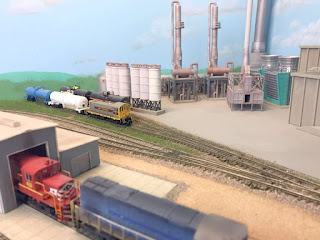 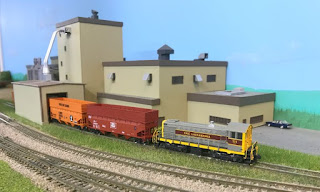 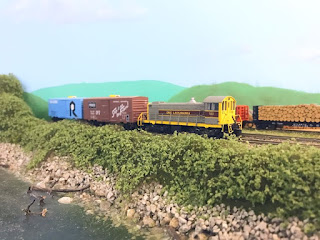 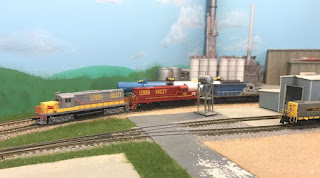 The Riceland Switcher gathering cars for the Haskell local. 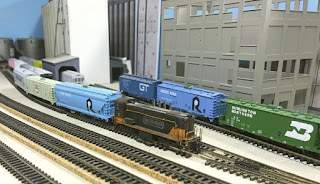 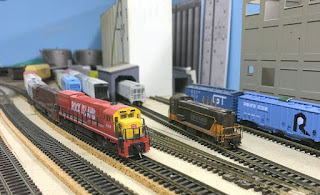 The NB mail train arrives in El Dorado, then departs and crosses the Ouachita River Bridge after picking up some passengers and mail. 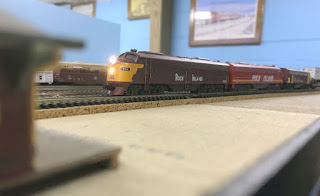 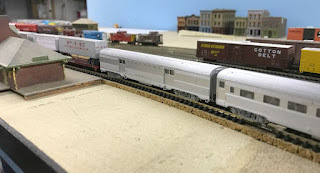 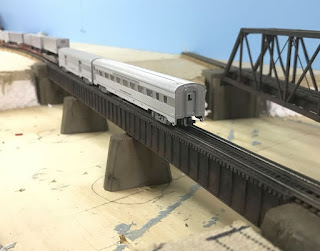 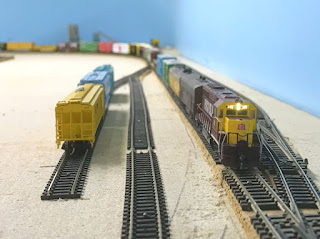 Action in El Dorado.
A SB freight passes the El Dorado station on the main. The El Dorado switcher with a long cut of cars backs onto the bridge while the LRMP-W crosses the Ouachita river before meeting the NB MoPac freight in El Dorado. 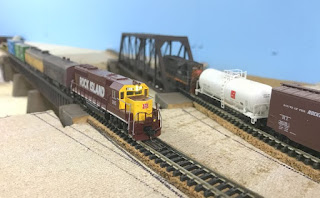 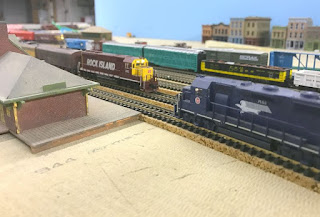 The Mopac gets clearance to leave El Dorado and then crosses the Ouachita River. 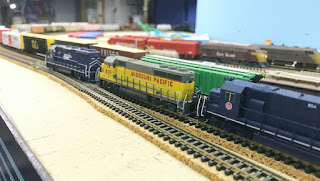 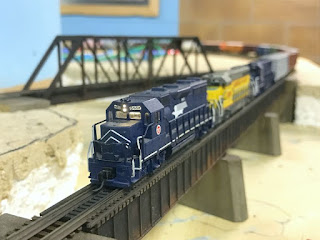 The El Dorado switcher getting the last of the cars shoved into the yard and then moves the last caboose into place before tieing down for the night. 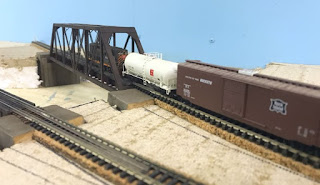 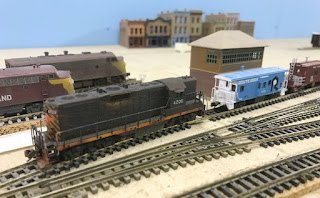