The Rock, MKT, BN and the MoPac

With the upcoming Session on the 18th of February, I got a chance to get some new power brought to life.  I've added four new Through Freights for this session and I needed some extra power for these trains. 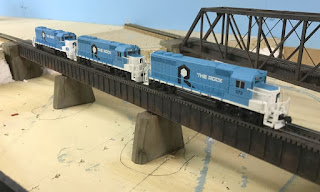 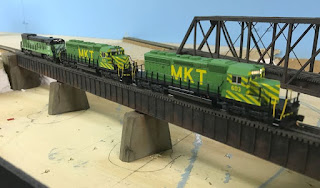 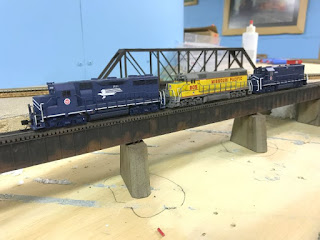 I got all these units chipped last weekend and then got them speed matched over the last two night.  Only ran into a few issues this round.

First, when I fired up the Accutrack speed tunnel, it didn't want to work.  So after I changed out batteries several times with no luck, I broke down and ordered a new, siiiiiigh.

Second, After getting the chip installed in the BN #5394, it worked fine until I snapped the shell on, then....Nothing!  After a bit closer inspection I found that the shell was pushing down too hard on the chip and was pushing the contact pads down away from the frame so it would make contact.  Nothing a couple of thicker solder pillows wouldn't fix!

Third, on the MoPac #605, I had a TCS CN-GP chip sitting aside for this unit. After getting it installed and running, the unit being an older Chassis, it was a bit noisy.....typical for the older chassis'. So I tore it down and Beardonized it.  This entitled removing the Inner Bearing blocks.

Worked like champ except......now the unit would only run in the forward direction while the lights worked in both.  So I removed that chip and installed a new one.  This time the chip worked good until I went to program it.  For whatever reason it would not take ANY form of programming.....grrr!
This was the last loco I had planned to use a TCS chip on, but it might be the last TCS chip I use period!  I've had other troubles with TCS chips, but I'm not here to bash TCS.

Anyway, I'm hoping these additions will add to power needed for the four new trains that I've added.