A little more progress, but nothing really good to show.
After getting the old stuff carted off to the dump, the next step was to get the electrical work done.  This included the re-wiring of the kitchen and putting in all new wiring with new circuits as well.

After tearing out the lower cabinets I was greeted with something I didn't want to see.  The waste line came out of the wall at an angle. 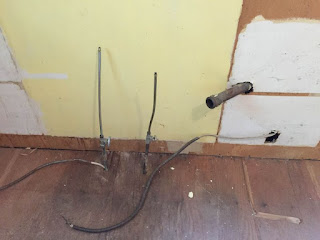 This was going to cause a bit of a problem as it would interfere with one of the two drawer stack in the sink base.  I could have rebuilt a couple of the drawer and made them 18" deep instead of 21".  So I decided to call a plumber I know to see if this could be changed without a huge hassle?  Once he got a chance to see what was involved with the waste line, he said he could fix it easily.  And so he did, now I will not need to modify the base cabinet. 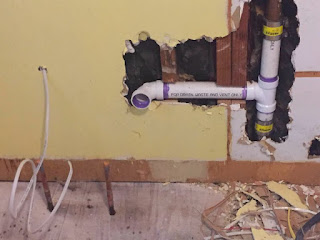 I'm also planning to have a tiled backsplash but the area on the wall where the tile will go needed some attention as well. It had several layers of wallpaper and old linoleum tile that had been papered and painted over several times over the past 64 years, so it was kind of lumpy.  My tile guy told me to remove that section of drywall and re-install new for a fresh start. 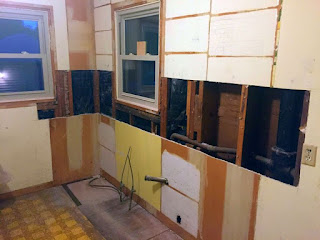 Before I replaced the drywall, my electrician said it would make his job much easier so I waited until he had the new wiring installed before I pieced in the new drywall.  I'm gonna have more outlets than I'll know what to do with! 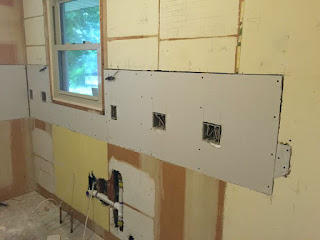 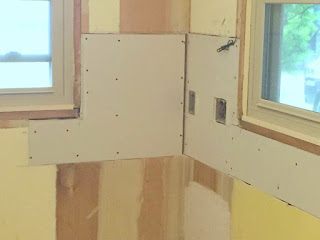 Now I can get started on the final wall repair and painting.

Jump to A New Kitchen part 19