While I was getting the layout staged the other night another nagging issue arose.  I need to get some loads!  It'll make things a little easier for me to grab cars for the four manifests that feed El Dorado and easier for the El Dorado crew to sort the cars once the arrive in El Dorado.

So I started figuring what type of loads I needed and it came down to pretty much two car types: Flat cars and open hoppers.  Heavy Metal in Malvern needs three types of cars to which receive steel for the their manufacturing needs.  Right now I have Coil Cars, Gondolas, Flat cars and Bulkhead flats.

I have the Coil cars, Gons and flat cars covered but am lacking on Bulkhead flats.  I started looking around for a few more Bulkheads and couldn't believe how pricy they've become.  A little more snooping on the web and ran across how someone used the Red Caboose Bulkhead kits from years ago to convert some of their flats! Hmmmm?

I did a little digging through my detail supply and ran across three sets that I had picked up years ago.  Sweet!  Next I went to my flat car stash and found three Athearn 53' flats that shouted "Pick me! Pick me please?"

While the kits said they were meant for Kadee cars [Ha! That in itself tells you how old they are!]  I found they fit pretty good even on the Athearn cars!  Close enough for me.

So I grabbed the first car, a MoPac flat.

And turned it into this.  I had to mix some paint to get it to match the color on the car. 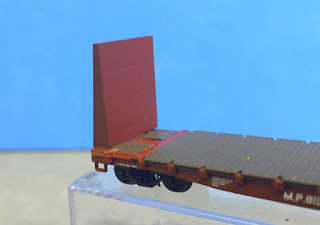 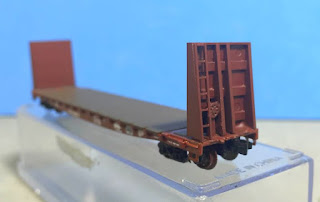 After I had them installed and painted I swapped out the Accumate trucks and couplers [again, this dates the cars! Now they come with Mchenry couplers, I believe.]  I had to do a little modification to to the car frame get the trucks to work properly.  First I had to grind off just a bit of thickness on the bottom of the end frames, just above the couplers.  The paint was pretty thick and the MTL couplers just touched the frame.

Next I had to grind off just a tad off the top of the MTL trucks around the bolster hole because they were a bit thicker than the Accumate trucks.  If I didn't then the screw that Athearn uses to secure the trucks in place would press down tight on the MTL bolster and would keep it from rotating freely.  A pretty easy job, I just used a cutoff disk in the dremel and gently ground away until things fit.  Didn't need to be too precise about it as nothing shows.

The replacement trucks needed wheels sets so I snapped in some Brown MTL Medium profile wheels, Done!  Not a bad project and didn't take too long either. 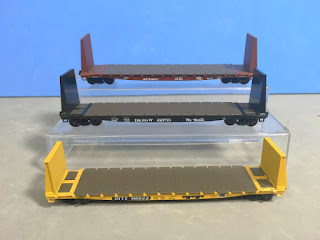 While the DRGW and MoPac cars have 10' heads, the TTX was an 8' kit.  Funny thing, all three kits had the same part number, even the 10' kits were slightly different as well.  The MoPac's head was even on the sides and the DRGW's heads had a lip that stuck out further than the outer upright beams? So with these three new Bulkheads Added to the fleet, I should have enough to get the loads delivered with ease.  Sure wish I could find some more of these?
The next thing I want to try is to paint the cheap looking plastic decks so they resemble weather beaten, sun bleached, oil soaked wood decks and give the cars a good coat of weathering.  Once that's done I can make some steel loads for Heavy Metal and this should make it easier for the crews and add to the look.

Jump to: Bulkhead flats anyone? pt2