Evolution of a lake, part 1

Last week I read where the county was almost finished with the renovation of the small lake near Malvern.  There was a lot of erosion over the past few years and the W&OV had expressed concern that it was getting close to their tracks.

The W&OV had offered to bring in the needed material to help shore up the area if the County would do the needed work.

Last week I ventured down the tracks a ways to see how it was coming along.  From what I could tell, most of the rockwork was done and there wasn't a lot left to do.  The first thing I noticed was how fast the damn Kudzu returned!  If I hadn't read about the the renovation, I would have never know they had done anything!  It's been very wet this spring, enough so that the Kudzu has covered the entire area within a few days!

They refer to Kudzu as  "The plant that ate the South"  It's amazing just how fast this stuff grows and makes you feel that if you don't keep moving you'll get covered next and wind up as a leafy lump!

As for the lake and new shoreline, Hmmmm, looks like I might have to get my boat out and restring some line!

I have been steadily working on scenery in Malvern over the last few months. Most of the area is covered to a certain point with some kind of basic scenery as of now and the only thing that was left was the big white step at Malvern.

I planned for some sort of a lake or river from the beginning, but wasn't sure how to pull it off.  While looking at some pictures on Google I came across some shots of lake edges that were protected by a large amount of piled rocks, much like a lake dam.

I figured that this might work well with as steep as it was.  I actually made the lake bed a little lower than I should have when I first built the benchwork for Malvern. 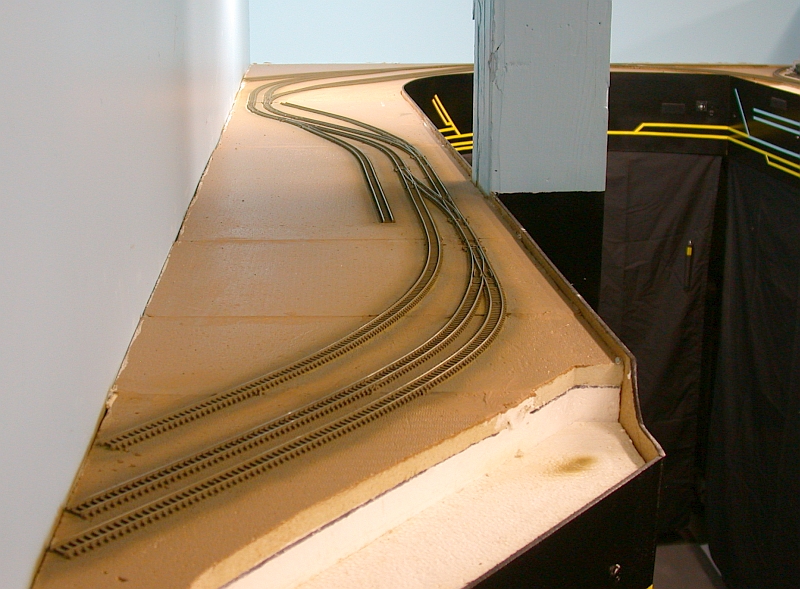 The first thing I did was to cut into the ceiling tile and foam and carve it back to form a slope and smooth things off a bit with joint compound. 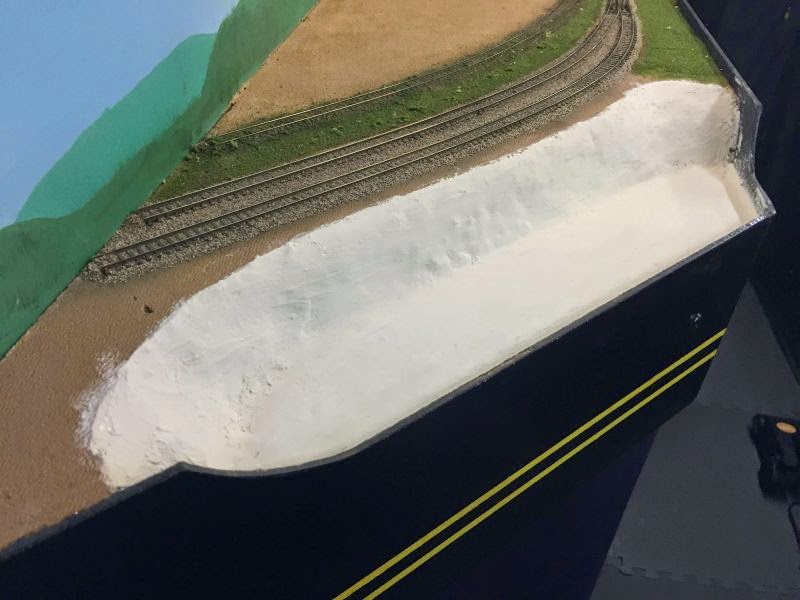 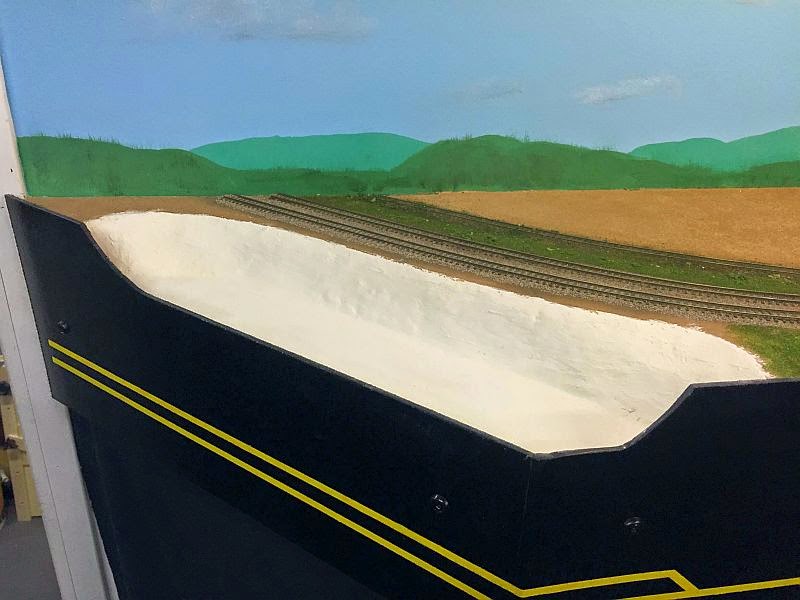 Once dried I painted the vertical areas with some cheap acrylic paint, Burnt Umber worked for a earthen color. 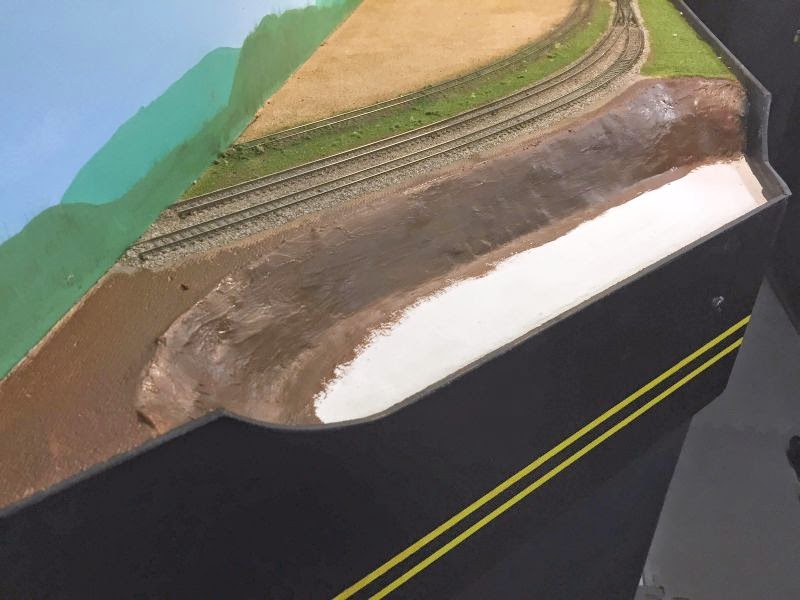 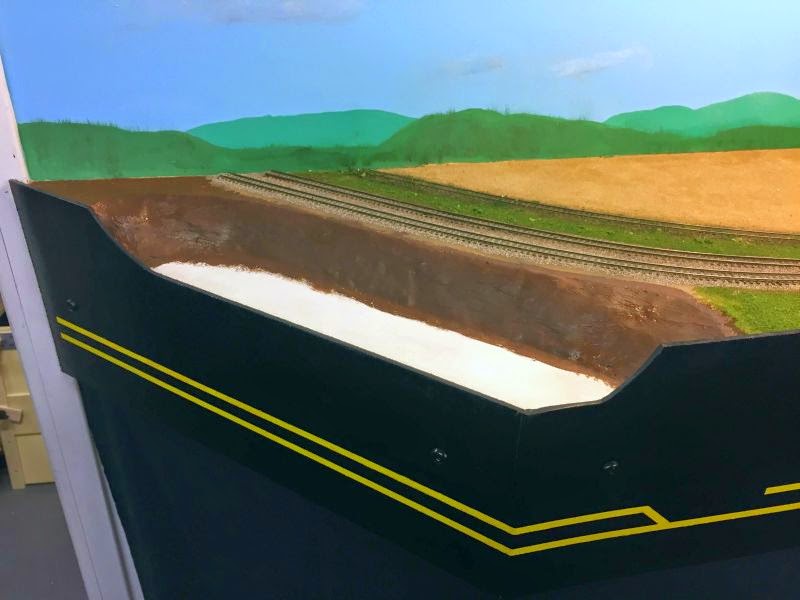 Next I used a dark green acrylic paint and mixed it with gray and black to give the lake bottom color and depth.  Lighter near the shore to darker as I got further away from the shore. 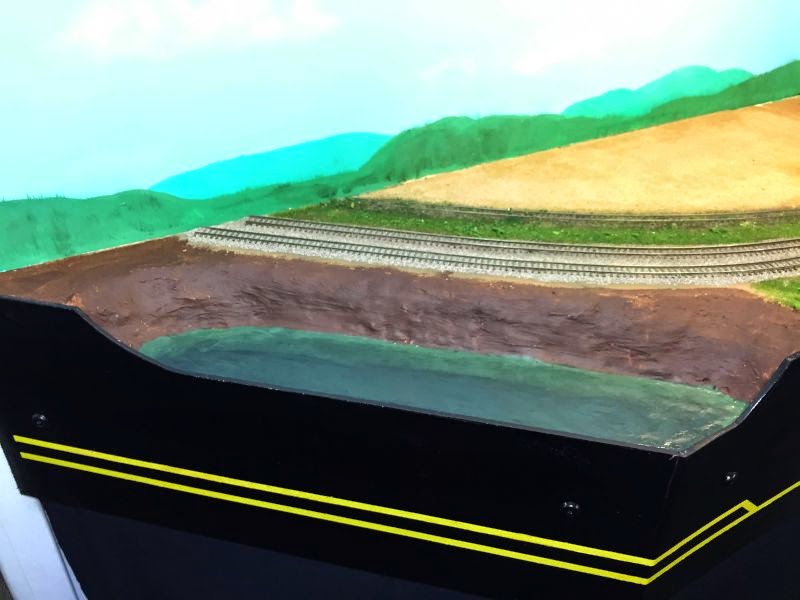 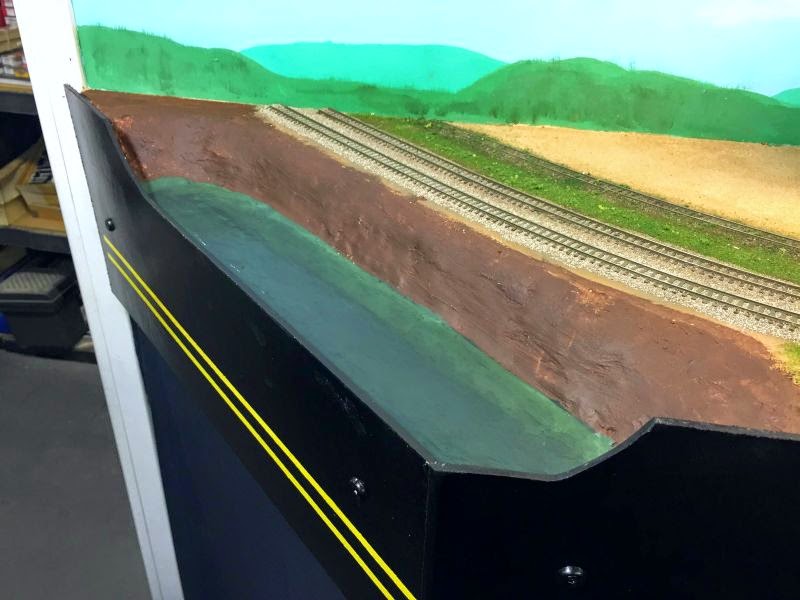 Then came the rocks.  I found some 1/4" limestone from the rear driveway, but most were too big for N scale.  So I sorted through them until I found enough that were roughly 1/8" to 1/4" in size.  I also found some Woodland Scenics medium course gray talus at Hobby Lobby that was smaller than the rocks from the driveway and matched the color of the larger rocks pretty close.

I attached the rocks to the vertical area by brushing on some full strength Matte Medium I had.  I laid down several courses of the larger rock along the bottom then poured on the smaller talus on top and above.  Once the Matte Medium dried, I went back over the rocks with diluted white glue and let it run down the rocks.  You can see that it hasn't quite dried when I took these pictures. 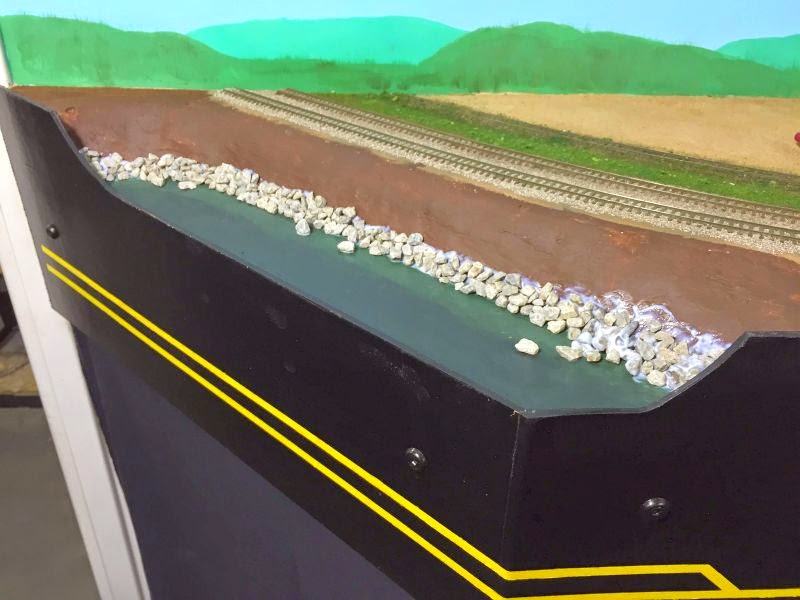 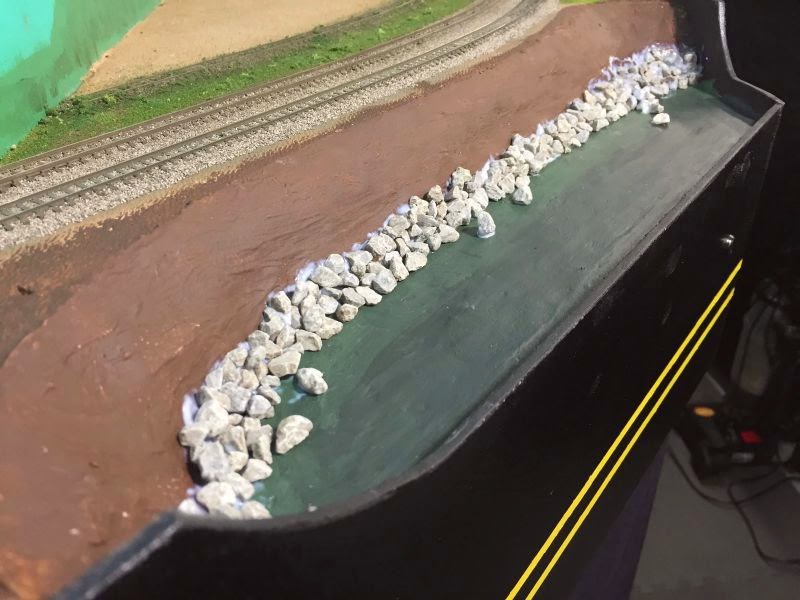 Once the glue had dried the next thing I did was to glue down a layer of blended turf over the brown paint above the rocks. 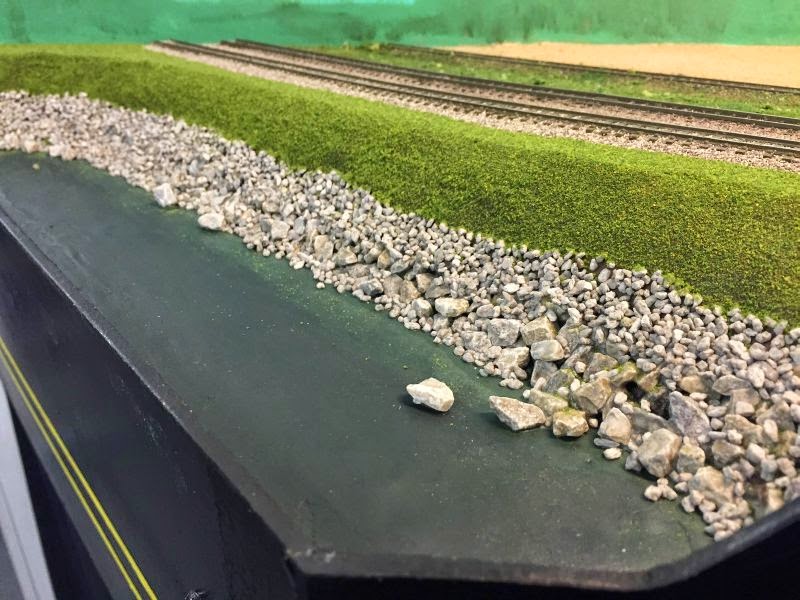 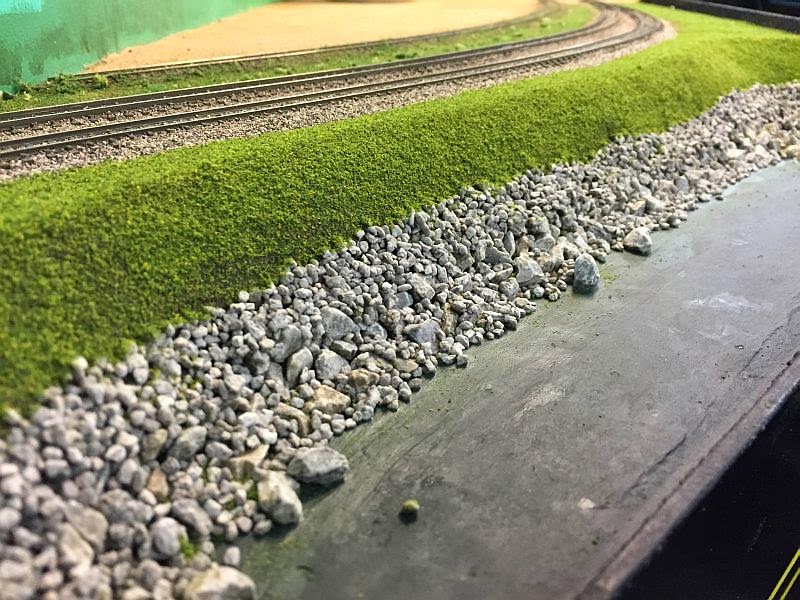 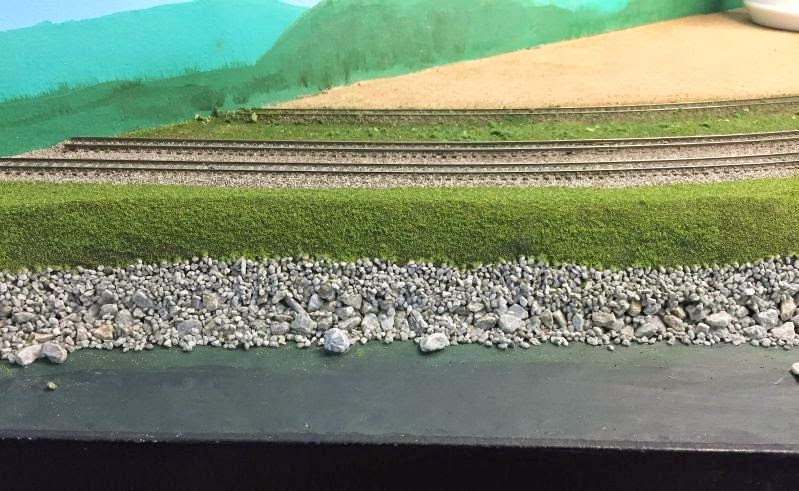 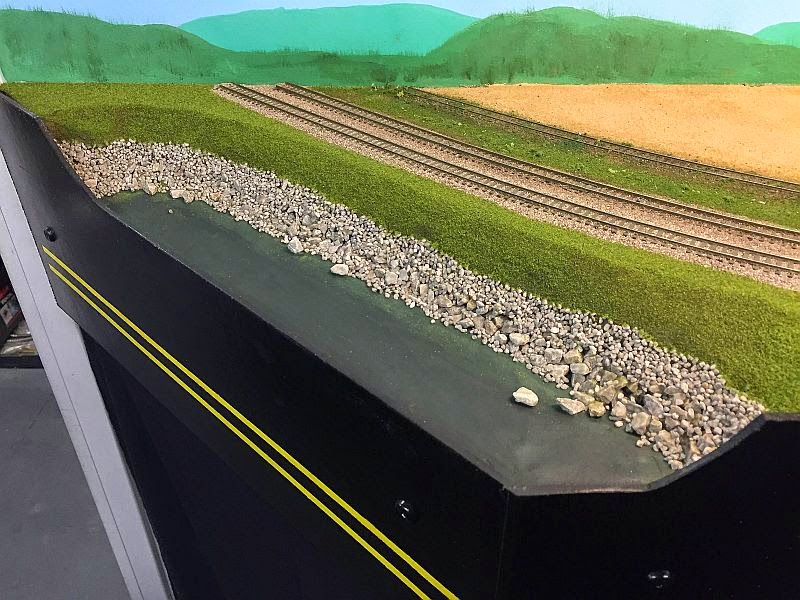 Next comes the heavy vegetation and water...

Jump to "Evolution of a lake part 2"