Another session is behind me and it went really well, thanks to everyone who attended.

Starting at 5pm seemed to work for most everyone this time as it only lasted till 8:30pm instead of 10 or 10:30 like we have in the past.  So I think we'll continue with this starting time.

I had hoped to drag the session out to about 4hrs this time by keeping the overall speeds of the trains down to 20-25 mph, trying to run on a simple schedule that would space them out a bit, which would give the El Dorado yard crew a much less rushed job.  For the most part it worked.  Doug had more than enough time to get his jobs completed, this also included setting out cars for the actual town of El Dorado.  At one point he actually had time to set the throttle down and walk around to see what else was happening on the layout.


Even with the problem of the locos running at a reduced speed from what I had them programmed to, wasn't very noticeable with the slower speeds.  So if I never figure out what's up with the programming, or should I say re-programming of the CV's, maybe it won't matter much.  On thing I've considered doing was to adjust the top speed of the locos to a higher setting and then if the CV's get re-programmed maybe they will run closer to what I prefer. So many things to try to track down with this, I might never get to the bottom of it.

The more and more I run the trains at a reduced speed, the more I like it.  While I was never one to run them at top speed anyways, to see them crawling along at slow speed does several things for me.
1- It takes longer to get where you're going so it gives a feeling of a larger layout or longer run.
2- It also does not show some of the sharper curves that are on the layout.  The locos do not seem to lurch or swerve as bad either.
3- It also give one more time to work and not feel rushed, this applies when working the yard at El Dorado which Doug concurred with this session.

I also plan to continue working on the timetable I've been playing with.  Not so much for keep to a tight schedule, but more so for keeping the trains spaced out and not getting them so jumbled up.

Unfortunately since we only had 5 crews for the biggest share of the evening, it didn't leave me much time to get a lot of pictures or videos.  So I went back down Sunday afternoon and re-staged a few.

The only major mishaps we had Saturday night was with the SBD auto rack.  Greg, not being very familiar with things didn't know he had to throw the North turnout of the passing siding at El Dorado before leaving town. It resulted in the lead loco derailing and completely rolling off the tracks.  But he was a trooper! He just brushed himself off, crawled onto the second loco and kept going so he didn't louse up the schedule!  Since it wasn't fowling the mainline, a call was placed for the cleanup crew who arrived later and reclaimed the C30-7 without much problems. 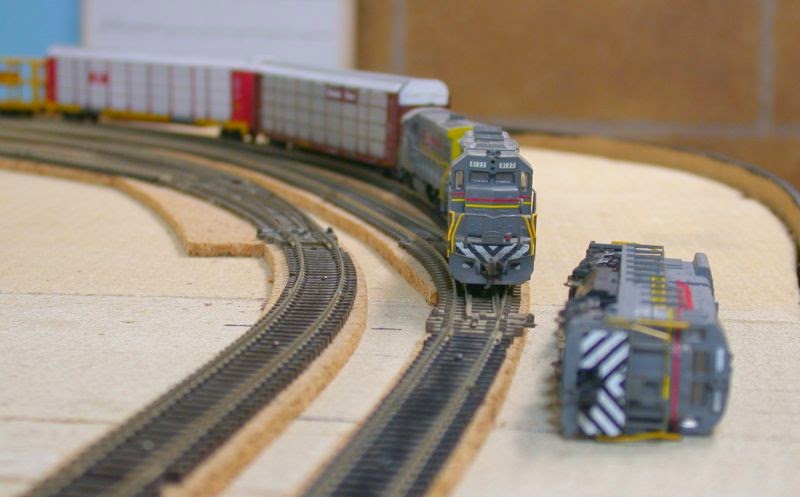 As for the new maneuver at Ruston between the ICG and the Winnfield local, it worked out just as planned and I will place it on my list of things to do.  When I get a chance I will remove the two sidings and relay the junction with a single track.  Again, since I didn't have time to video the actual interchange during the session I re-staged it Sunday afternoon.  I apologize for the crappy video and the vertical format, but it was the only way I could shoot the entire scene.

The way I had this designed in the beginning was to have the ICG leave the it's staging a the start of each session and run out the junction and preform a run around with the cars that was left there from the previous session, then return to their staging.  The the Winnfield local would drop off their cars and grab what the ICG had left earlier.  This was a simple job which gave a newbie a chance to get their feet wet without becoming overwhelmed.  But now this gives a chance for both crews to interact and adds small challenge to keep things interesting.  Quin drew the Winnfield local and I drew the ICG job and it went off without a hitch.

I also want to thank DJ of DJsTrains for posting his video which I uploaded in a recent post that gave me the idea for the new maneuver at Ruston.
Thanks DJ!

With this session behind me and the weather warming up, I have a bunch of outside jobs to get after.  Once I can get a few them under control and the weather really warms up, my plans are to get back to working on the layout and get some of the buildings finished up in Malvern and start on a few other places so I'll have more than just Ceiling Tile Flats everywhere.