All in all we had a very good run that night.  I wish I could say the same for the pictures.  I used my iPhone instead of my normal digital camera and some of the shots came out kind of blurry, please forgive me.

We'll follow along with each train as it makes it's run with the pictures that I was able to get.

As they say on the forums;
"Pictures or it didn't happen"

Calvin [middle] eases the first of the four manifests trains, the NB LRMP-W to a stop on the main and prepares to drop a cut of cars as Don [left] and John [right] brings the first cut of  outbound cars from El Dorado yard to the A/D tracks. 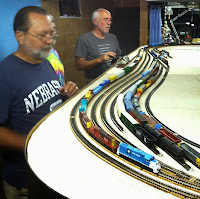 After shoving the outbound cars to the A/D #2, John realigns the turnout to A/D #1 as Don makes the cut on the LRMP-W  while Quin looks on. 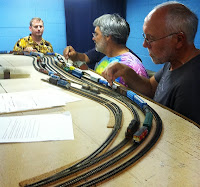 After hammering the ICG diamonds at Ruston, LA, train LRMP-W takes the cut-off at Tioga Jct as it heads for Alexandria, LA. 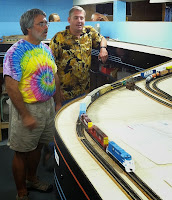 Quin is giving Calvin instructions on how to acquire the next train; the NB MPLR-W 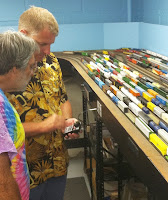 As Calvin brings the NB MPLR-W into El Dorado, Don and John are getting the next batch of outbound cars readied. 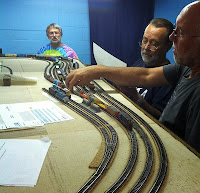 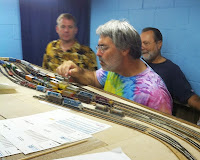 With the in bounds set out, Calvin goes after the out bounds, while the El Dorado switcher gets the yard tidied up. 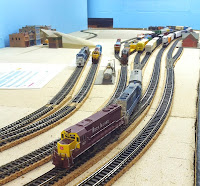 After the work is done in El Dorado, the MPLR-W heads north through Calion, AR. and then through Fordyce, AR.  Doug is giving Roger a helping hand with the W&OV switcher as he gathers his cars in Malvern. 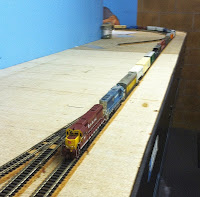 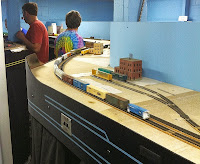 Train MPLR-W swings around the engine facility at Biddle yard in Little Rock.

A poor grab shot of a much sought after train on the Little Rock Line; The W&OV's Razorback.  I caught it as it was cruising through Fordyce as it makes it's run south to El Dorado to exchange cars with it's two big second hand ALCo centuries.  Rumor has it that these will be retired shortly and replaced with three smaller ALCo's. 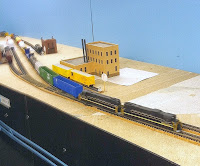 I take my turn at the throttle as I head Amtrak's NB Rebel through Tioga Jct. 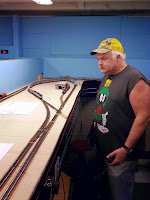 Bringing the Rebel to a smooth stop at the El Dorado depot we see the Razorback waiting on A/D #2 while the yard goat is shoving it's new cars onto A/D #1.
Notice the look of concentration on Don's face!

With it's run finished I return the Rebel to it's track in the staging yard.

After returning to Malvern, Doug [front] continues to assist Roger [rear]  as he begins to make the set outs with the Malvern switcher. 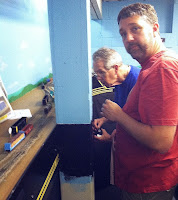 A mishap at El Dorado couldn't have come at a worse time!  While getting the cars assembled for Winnfield Turn, the yard goat either found a bad section of track or the local vandals laid something on the rails!

The big hook is brought in.

After the clean up has been made, it's back to work as usual in El Dorado.   Don and John finish getting the Winnfield Turn assembled. 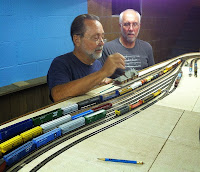 Quin is getting the power ready for the Winnfield Turn as the yard goat digs out the cars from the Pool Track for the rest of the cars needed on the local.

A GP7 and GP40 will power the Winnfield local today.  They make a run down the main to the south end of the yard where they'll tie onto their train as John shoves the crummy into place. 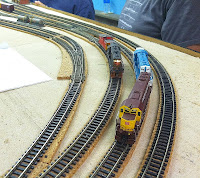 The first stop for the Winnfield local is Dubach, LA.   Quin takes the siding and then assess the situation. The first move is to set the crummy on the team track near the Piggly Wiggly Distribution center.

As Quin continues to work Dubach, the NB MPLR-H [the third manifest of the session] swings through the big "S" curve in town. 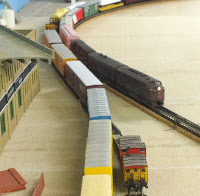 After making the cut at El Dorado, I pull the MPLR-H north out of town. 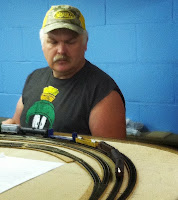 Big smiles from the crew of the SB LRMP-H as they begin their southbound journey.  Roger [rear] and Doug [front].

A NB Rock Island through freight crosses the ICG diamonds at Ruston, LA as it heads for Dubach, LA.  Let's hope the Winnfield turn has the mainline clear. 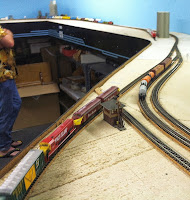 The Rock Island freight takes the passenger siding at El Dorado for a meet with the SB LRMP-H.  With the caboose in the clear and the turnouts re-aligned, the freight throttles up as it leaves El Dorado.  Roger then waits for the cut to made before shoving the cars onto one of the A/D tracks. 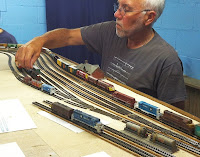 Trundling along northbound, the Rock Island freight passes Dixie Woods and Flappers in Fordyce, AR.  This pair of RI FP7A's are now racking up revenue miles on their new home rails after being transferred from service from the old Illinois Division layout of Steven Johnson [now the Ottawa Sands Division].

With the cars tied on and the air pumped up, Roger pulls the LRMP-H south out of El Dorado.

On it's return trip to El Dorado, the Winnfield Turn works the final job at Dubach.  Loaded plastic hoppers are being set out at the ARKLA Distribution spur, then ties up on the main.

With an unusual occurrence,  the Winnfield Turn is forced into "the hole" on the main.  The SB LRMP-H has to roll through the siding at Dubach.  It sounds like Quin will be sitting there for a while as there is some chatter coming over the radio that the SB North Western Stack train is close. 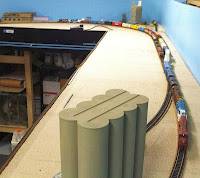 A few minutes later, we catch the stacker as it leaves the south end of Dubach siding.

A little while later there's more chatter over the squawk box which announces a SB MKT coal drag that is passing through Haskell and a NB detour train; a Seaboard System auto rack.  Both are on their way to El Dorado.  The passenger siding at El Dorado is the only siding long enough to hold through freights, but the coal train is normally longer than the siding.  I smell trouble coming.

The coal drag gets to El Dorado first and a miscommunication sends it into the siding while the Rack train heads down the main.  As figured, the siding is too short and the SBD caboose just doesn't have enough room to clear the south turnout.   After a bit of head scratching and grumbling, the decision is made to back both trains out of town.  Fingers are crossed with anticipation that a saw-by won't be needed!

Time is running out for the crew of the Winnfield local who is still sitting in the hole at Dubach as the two long trains make their reverse moves in town.

After needing to bunch the slack out of the auto rack train on the siding, the Katy units are able to just squeeze past the SBD caboose with inches to spare!

Everyone breaths a sigh of relief as the coal drag leaves town.  A passing news chopper hears about the commotion and swings overhead to snap a picture.  El Dorado yard is empty and the mains are full of trains as the yard crew continues to build the Haskell Turn.

Finally!  The Winnfield crew makes preparations to get under way for final leg back to El Dorado as the KATY coal drag rolls through the siding at Dubach.

Nearing the end of the session I find Doug at Haskell, AR. with the Haskell Turn working the Riceland plant before heading back south to El Dorado.

One more drop.  The Haskell Turn makes the last set out at Calion Lumber Co. in Calion, AR.

The day draws to a close as the Haskell Turn enters the yard at El Dorado and pulls down A/D track #2.

Something tells me that Roger isn't happy that the session is over or maybe he just doesn't like his picture taken?
The Blue flags are hung. 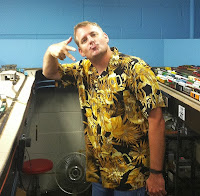 As I said earlier in the post, everything went very smooth on this session.
The few exceptions were:
The incident with the El Dorado yard goat.  I actually had to replace the two MP15DC switchers with the ex-Rio Grande GP7 due to a mechanical failure, one of the chips decided it didn't want to play anymore.

The meet of the Auto Rack train and the Coal drag, which shouldn't have happened, but I think the trains may have gotten ran out of sequence.  As it turned out, it just added to the fun!

One of the UT4r's kept loosing connection with the wireless Loconet.

Finally, there were four cars called for the EL Dorado switch trick that never showed up.  This was a new job for this session.  I later found out that they didn't get thrown into the yardmasters list on the Wheel Report.  This was my fault as the formulas never got programmed into the system.  I'll be working with Quin and Steven to get this resolved before the next session.

We started out a little short handed this session with only 7 members present.  Half way through, Calvin got called away, that left 6.  With Don and John teaming up in El Dorado and Roger and Doug working the W&OV, that left several openings for jobs.  Judging things on the session, I think I can safely say that we could handle 8-10 members total per session if they were teamed up in two man crews for each of the 4 working manifests and the W&OV.  The through freights and the two smaller jobs; the ICG interchange and the Riceland job would still only need a one man crew.  It might become a little crowed, but I think it could work.

I also have a few videos from this past session, but I need to get them cleaned up and uploaded to YouTube first.

Thanks for following along.